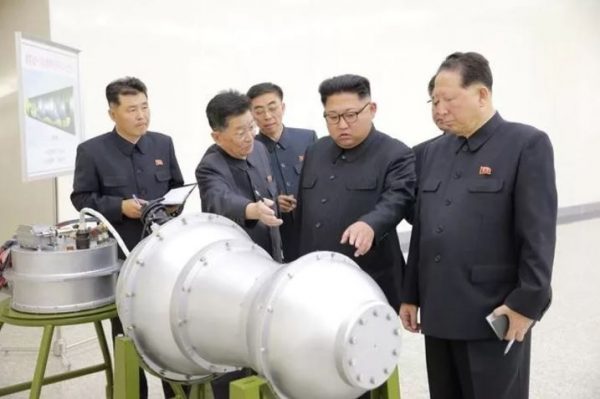 For broad policy, there are only two things that matter about the latest North Korean nuclear test: The explosion is very big and the bomb possibly small enough to fit on a North Korean missile. If it isn’t that small yet, the next model will be.

The yield measured for the test was about 150 kilotons. That’s about ten times the force of the Hiroshima bomb. It doesn’t matter whether it was 130 kilotons or 200 kilotons. It can destroy a city. The missiles now being tested can reach the United States.

North Korea probably does not have a lot of these missiles fitted out with these bombs yet. It would be foolish to make a large number of missiles and bombs until the designs were tested. But now many of the tests have been done. Production can start.

North Korea’s fundamental motivation for acquiring these weapons is to preserve its government. It sees the United States as its great enemy, with some reason. No peace treaty has been signed to end the Korean War of the early 1950s. The United States continues war games with North Korea’s neighbors, and indulges in other provocations, like sending bombers from Guam to overfly South Korea and remind North Korea of its power. Commentators in the United States casually suggest regime change.

So we must look to deterrence. North Korea will not give up its nuclear capabilities. North Korean statements seem to imply some readiness for negotiation, which we would be wise to reply to. That reply might be as little as proposing military-to-military talks to minimize misunderstandings during military exercises. But a start must be made.

There is another sort of analysis, some of it on Twitter. Experts use the clues from North Korean photos, statements, and what can independently be measured of their tests to figure out what those missiles and nuclear bombs can do. The CTBT Organization is set up to analyze nuclear weapon tests, and they release results as they feel they are reliable. National intelligence organizations also analyze information on the tests, but they release their findings only in the most general ways.

This type of analysis is useful to estimate how many weapons North Korea may have and when they may have more. It will be useful in negotiations on limiting those weapons, if we can get there.

There is an offshoot of this analysis that serves to soothe fears of nuclear holocaust and fears of an upstart nation getting highly dangerous weapons. That analysis concludes that those weapons are not so good and probably North Korea was helped by others. Iran and Russia have been mentioned in the last few days, Ukraine earlier and erroneously. That kind of thinking is dangerous because it allows us to pretend that we can avoid engaging with North Korea.

The evidence for this more granular analysis is not much. The seismic yield, which is being refined by CTBTO, pictures of what is claimed to be the latest device and an earlier one, and, if we are lucky, isotopic results from sniffer planes and ground stations. As with the other tests, it appears that we will not have the last. North Korea is very good at containing the remnants of their tests, even when they result in considerable ground-shaking.

The device yield will be an estimate. We don’t know enough about the North Korean test site and how they emplace the devices to be able to say more. The pictures don’t tell us much. There are enough pictures of nuclear weapons on the internet that North Korea should be able to produce persuasive mockups. The picture at top looks to me like vacuum system components were bolted together. Another picture that has surfaced seems different from that casing. That picture seems to be of the device that was detonated. Analysts will be measuring the pictures to get dimensions and compare the two.

The bottom line is that the North Korean nuclear and missile capability is real. If nuclear-tipped missiles are not yet aimed at North America. North Korea will not give up that capability any time soon. The goal of negotiations can no longer be denuclearization of the Korean Peninsula, but rather a way to live with a nuclear North Korea.

Vipin Narang, Why Kim Jong Un wouldn’t be irrational to use a nuclear bomb first

Ariane Tabatabai, What the Iran Deal Can Teach America About North Korea

Joshua Pollack, Why didn’t the US shoot down North Korea’s missile? Maybe it couldn’t