Have you seen Aida?

This production was different, but let me assure you that the fabrics, staging, singing, and orchestra/conductor were fantastic! I wasn’t a big fan of the quasi-1940’s uniforms and related accoutremants, but for the most part, the costumes were of wonderful fabrics and patterns, and I dig that, big-time! For me, opera is as much about the rest of the show as the voices and music. Without them, a production fails, but it’s the mastery of the rest that truly make L’Opera – “the big show”.

Production-wise, the mothers-and-children scene was a great example of making a story of old work with some relevant-to-modern-audience references: it played to a nicer self-story of the relationship between captor and prisoner, mistress and slave. And it was new – this scene and all it conveyed were not original to the opera. In place of the opera’s traditional elephantine and equine visuals, we saw mothers (and, I’m sure, nannies) encouraging and being challenged by their sons/charges. “It was neat” seems trite – this was a really amazing, coherent re-interpretation. And the music and signing were just amazing. I still cannot believe what I heard, that humans can create such magic with their voices, even if it was a Sunday matinee performance.

This was right before the show began, and the curtain rose…. 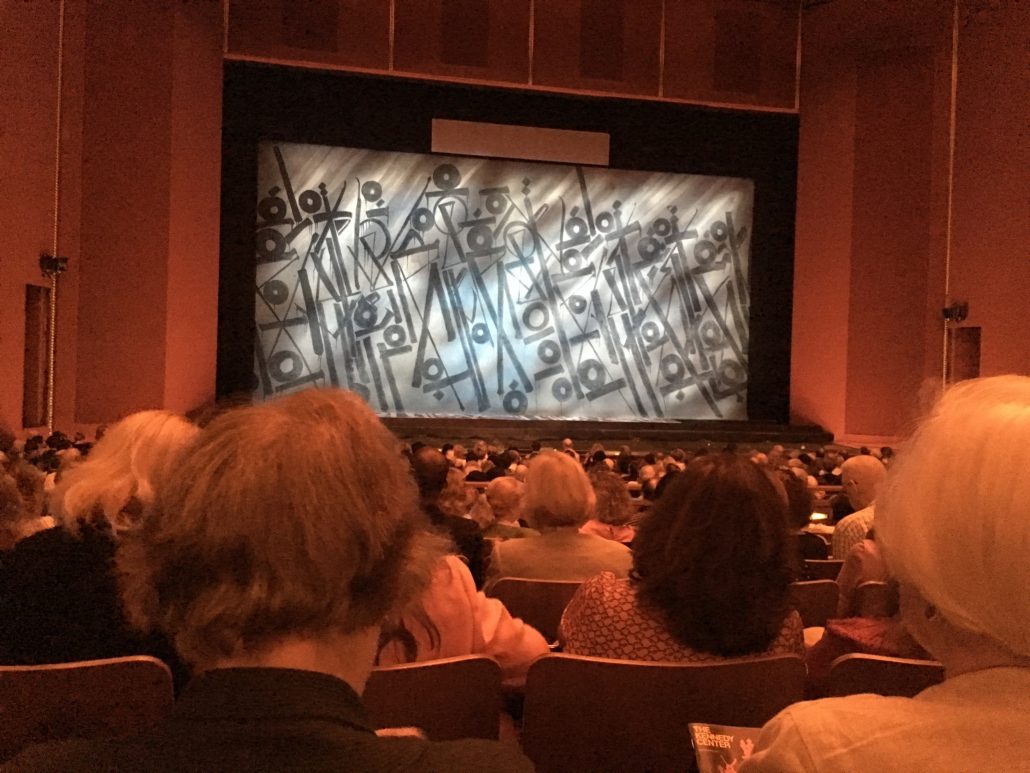 So, I bet you don’t know what’s coming Thursday or Friday. Let me assure you, you know NOTHING! about what’s to come – bats and mines, memories and travels. It will be glorious!

Did I mention the (long-awaited!) return of otmar? You know I did!

And to begin that climb to Mt Awesome, more from…

J. Paul Getty was one of the richest men in the world in the 60’s and 70’s(he died in 1976), making his fortune in oil. He had a ranch house along the Pacific coast at the border of Malibu and Pacific Palisades that over looked the Pacific Ocean. He had amassed quite a large art collection so he opened a gallery adjacent to his home in 1954. This gallery began to run out of space so he commissioned a new museum modeled after the Villa of the Papyri at Herculaneum. This new museum opened in 1974(Getty never visited it since his primary residence was in England). It was a pretty big draw when I was in high school, but I never visited. After Getty’s death, his will created the J. Paul Getty Trust with an initial endowment of $600 from his estate. The Villa, though it had just opened was already running out of space; so they planned and eventually built a new museum complex in the west LA community of Brentwood(it took about 20 years due to NIMBY).

The Getty Center is perched on a ridge above the 405 freeway just as it exits the Sepulveda pass. You can’t drive up there, you have to park in the parking lot(or take public transportation) at the same level as the freeway and take a really cool people mover up to the Center. The Center contains the museum, a research facility, gardens and some killer views of Los Angeles. These pictures are the result of two visits to the Center and focus on the views and the gardens. My primary motivation was to get a panorama of UCLA with downtown Los Angeles in the background. My first visit I took my infrared camera as well a my regular camera, and the second visit I just took my regular camera. I needed to make the second visit since downtown Los Angeles was pretty much obscured by haze and I really wanted to get a clear shot of both UCLA and downtown. The weather cooperated much better on my second visit. Again, as with my visit to the Villa, I used public transportation(commuter rail, subway, light rail and bus) for both my visits.

UCLA with downtown LA in the background.

This is from my second visit in March of this year. It looked pretty clear out so I decided to give it a go. You really can’t tell how good the view will be until you actually get to the Getty, so I really didn’t know that it would be quite this clear until I saw the view from the people mover in the way up the hill. This is panorama made from 8 shots. The full shot is massive(remember it’s 8 shots at 28 megapixels) but is highly detailed. I can pic out landmarks from West LA to downtown and all the way to Covina.

UCLA with downtown LA in the background(Infrared).

This picture was taken from the same location as the panorama above, but is a single shot with the infrared camera. I had quite a bit of trouble with my infrared filter and the battery on the infrared camera(I now always carry spare batteries). 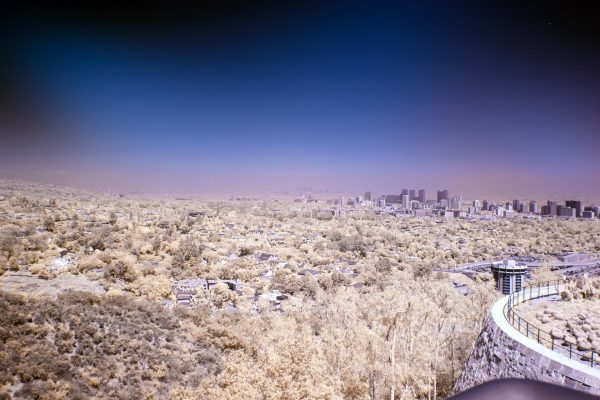 Main courtyard of the Getty museum.

This is the central courtyard of the museum complex with the galleries surrounding it. Obviously I had my fisheye lens with me. 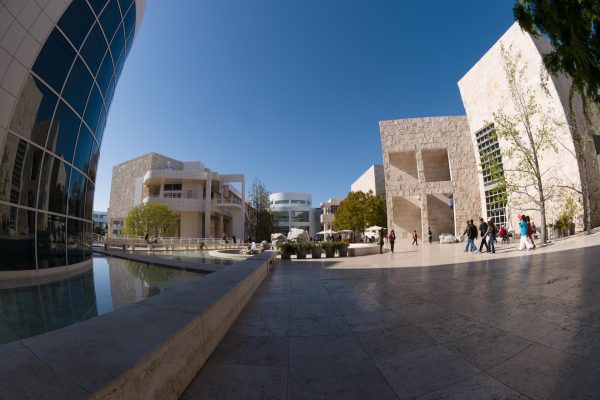 Waterfall and pool in the garden.

This is pretty much the focal point of the garden, you can see the maze like hedge within the pool and the bougainvillea climbing up iron supports to look like trees. 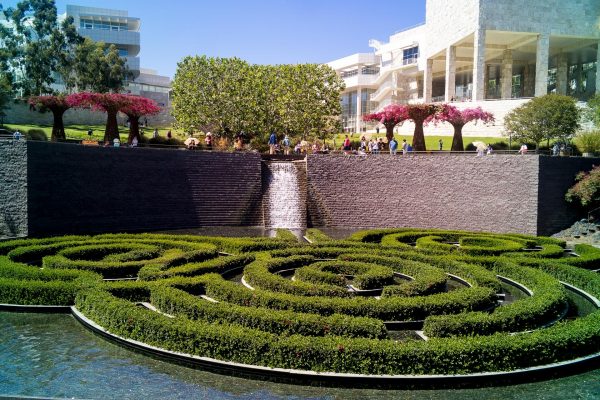 Waterfall and pool in the garden(infrared). 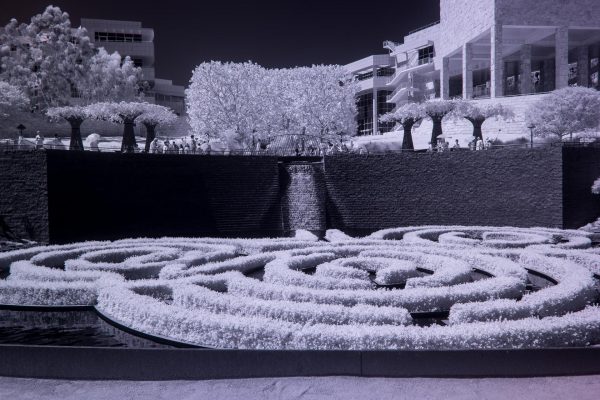 Bougainvillea climbing the iron supports to give it a tree like look. 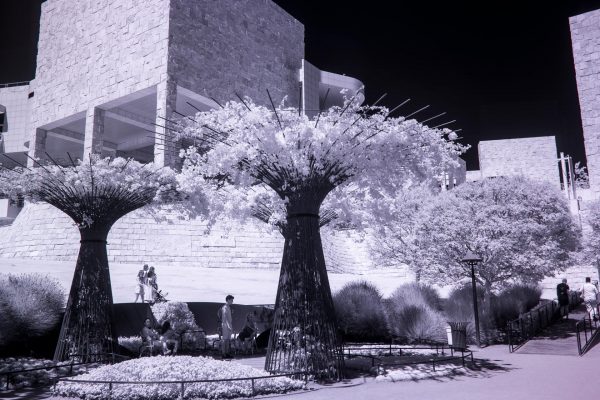 West LA from the Getty Center.

View of West LA with the garden and museum in the foreground. This was from my first trip up the Getty and you can see the marine layer beginning to move in towards the background. 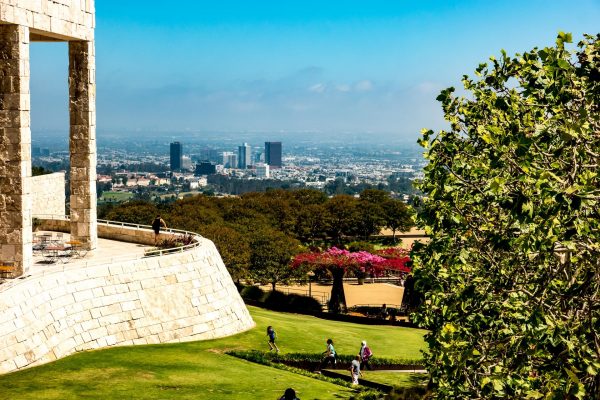