Commenter Mnemosyne said this in a thread on Monday:

“G and I were down at the Los Angeles Central Library this weekend and they have a set of cool art murals installed that are designed to comment on the “history of California” murals that were painted in the early 1930s. My pictures didn’t turn out, so Bill should go down and take some for us!”

It turns out that I’ve already gone down there and taken some pictures .

The LA Public Library dates back to 1944 when Los Angeles was a small town with a population of under 1,500. The library had a number of temporary locations, a saloon, a room in the old brick City Hall on Broadway and in a department store(the Broadway, IIRC). In the early 1920’s there was a push to build a permanent home for the library and they finally, after a number of failed tries, got voters to approve a bond to build it. The city was able to purchase the land to build the library from the state for $1, using the site of the old Normal School which had moved to Hollywood and had already become the Southern Branch of the University of California(latter UCLA). The city hired Bertram Grosvenor Goodhue to design the library(he had already designed the Nebraska State Capitol). He designed an Egyptian styled building(this was a thing in Southern California in the early 20’s) with a square central rotunda topped by a pyramid. Within this rotunda are the murals that Mnenosyne referred to depicting the History of California painted by Dean Cornwell in the late 20’s and early 30’s. The Central Library building was completed in 1926, though without Goodhue who died in 1924. By the early 60’s the library was running out of space and there were proposals to tear the building down and build a bigger library, but fortunately voters never approved funding. Moving forward to the early 80’s, a new idea for funding the renovation and expansion of the library was devised; sell the “air rights” or the right to build a tall building(the US Bank tower) next to the library. The need for renovation was hastened by two fires in the library on April 29, 1986 and September 3, 1986 with the first destroying 20% of the library’s collection and damaging(water damage) a good portion of the remainder. The library reopened in 1993 with the Goodhue building being restored to it’s former glory and the 8 story Tom Bradley wing* on the east side and a restored garden(it was a parking lot before the fire) on the west.

*Fun Fact: the elevators in the Bradley wing use old cards from the library’s card catalog as a wall covering.

Goodhue building from the west.

The Goodhue building has a square rotunda with a tiled pyramid on the top. The tile on the pyramid was reflecting quite a bit of light, so I’ve darkened it a bit. 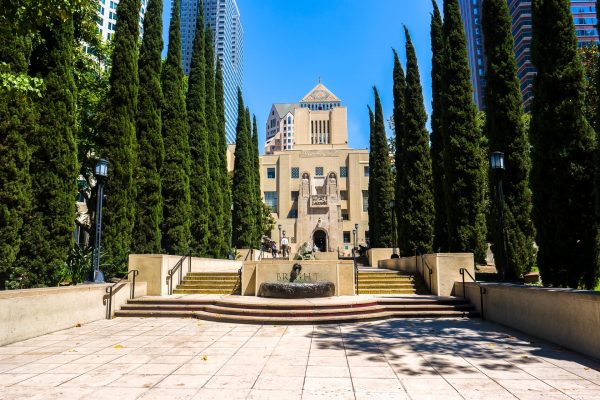 Night shot of the Goodhue building

This shot is closer to the entrance so you can see the pyramid portion just peeking up over the roof. 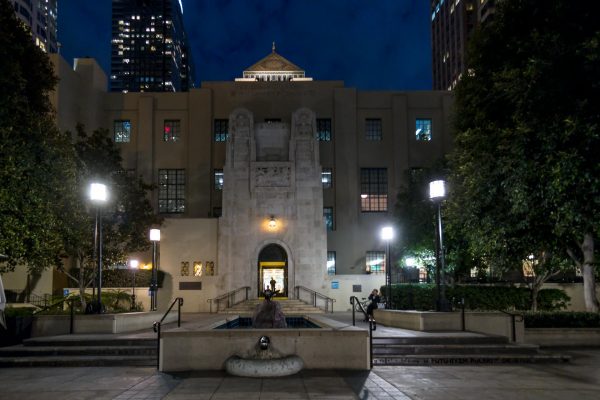 Top of the rotunda.

They have a lighting fixture at the top of the rotunda shaped like a globe with the Cornwell painting on each of the four arches with windows in them. The rotunda is named after Lod Cook, the former chairman of ARCO(they raised quite a lot of money for the restoration, being that their headquarters was across the street). 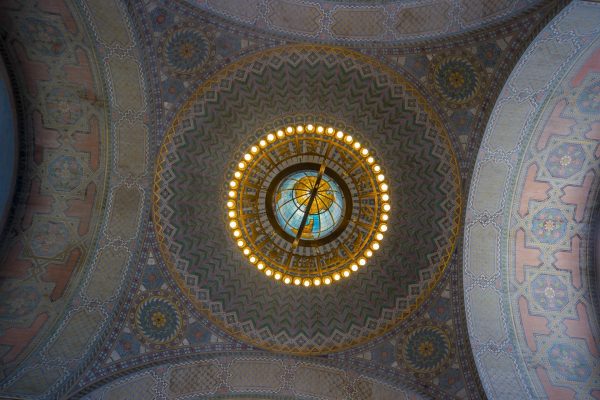 This mural is on the west panel. 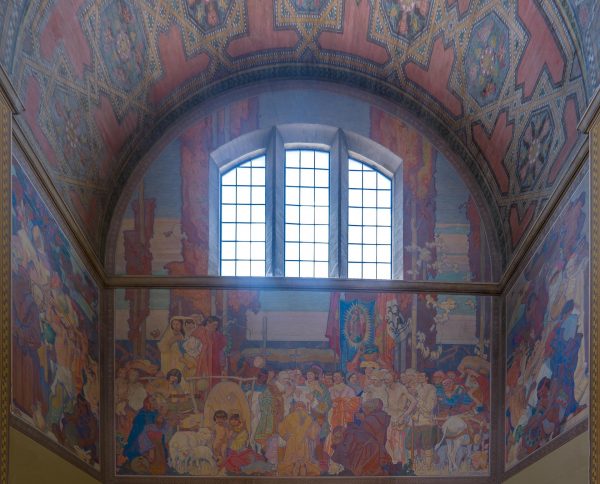 This mural is on the east panel. 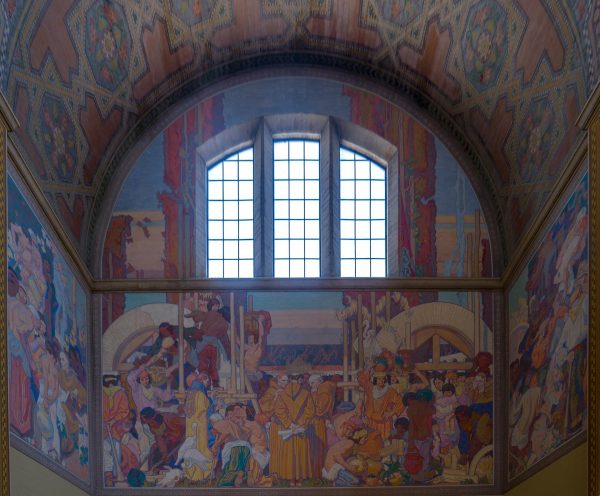 This mural is on the south panel. 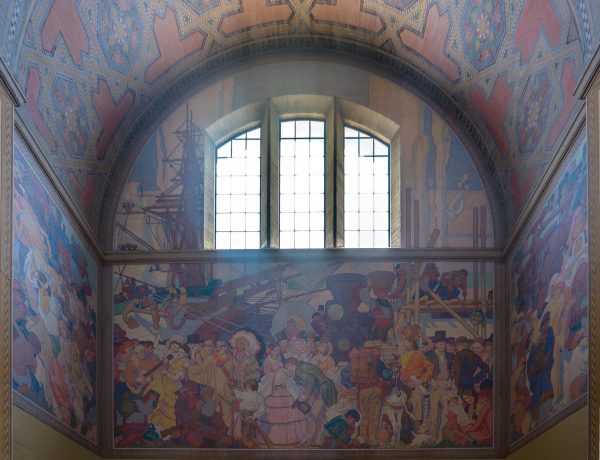