You are here: Home / Economics / Free Markets Solve Everything / Apropos Of Not Much

So I read the latest over at Talking Points Memo on the slow-rolling Republican “moderate” cave on the tax bill to Trump and the GOP’s I Got Mine/Tongue-Bath-A-Billionaire Caucus.  That led me to a Twitter rant born of despair and rage.

The TL:DR is that dominant-power decline has happened before, will happen to whoever comes next, and is well underway now.  None of this is new; none original.  It just bubbled up, and as misery loves company, I give you a slightly edited version of the rant below.

As the GOP prepares to transfer wealth up and gut national finances in the process, it’s worth reflecting a little on national power. US predominance is no law of nature. It emerged in specific historical circumstances, & it will erode (is eroding) within its historical moment.

Trump and GOP actions are powering that decline, from gutting US diplomacy to abandoning soft power/trade alliances to an over reliance on the trappings of military power on the international security side to an attack on the US’s domestic capacity to solve problems, propel economic growth, and secure good lives for the great mass of its people.

The attack on universities that is both part of GOP rhetoric and built into the tax bill, for example is an attack both on civic life (in the form of engaged and critical-thinking citizens) and on the dollars and sense of economic life. Universities are where research happens, ideas turn into companies and all that. Whack them and we become not just dumber, but poorer too.

More decline follows as the basic sequence of life gets made harder for more people. CHIP follies are making pregnancy and childhood more wretched and even deadly. Ongoing assaults on the ACA, Medicaid and Medicare do the same for all of us and if/when the GOP passes its tax bill, most Americans will see taxes and deficits go up, threatening Social Security and everyone’s old age.

This kneecapping of American well-being and power extends across the policy spectrum.  Crapping on the environment isn’t just a matter of not hugging trees.  Just ask the citizens of Flint, MI if bad water is just an aesthetic loss. Recall the LA of my childhood and consider whether air pollution is just a matter of obscured views and great sunsets, etc.

All of these (and many more) domestic policy choices actually make us poorer, as individuals and as a nation. One more example: we already have crappier infrastructure than many of our national competitors. Among much else, that means it can take us longer to get to work — which is both an individual cost and and a net weakening of the US economy as a whole. 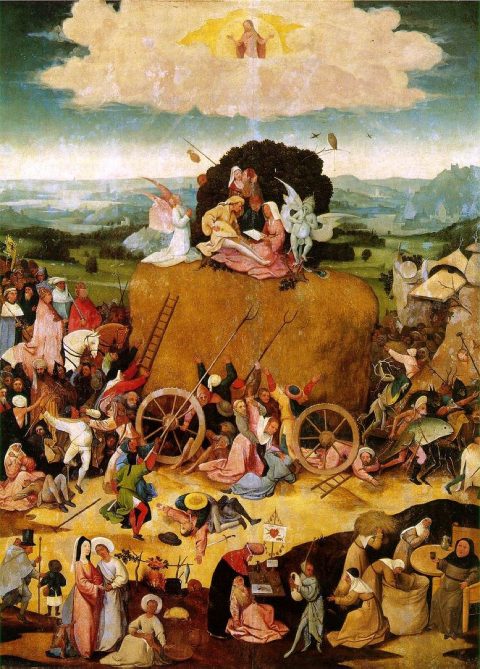 These are hidden taxes, charges we pay not in cash, but in our ability to choose how to spend our lives. That cuts US productivity as a matter of GDP, and our contentment as a matter of GHQ (Gross Happiness Quotient) (I made that up. I think.)

None of this means American will (necessarily) collapse entirely. It just means we will be less well off and, in the context of national power, less able to act in the world as a whole. We won’t be able to afford as much (see Britain, post 1918), and…we will — we already — find ourselves with less moral capital, less ability to persuade and encourage fidelity and emulation abroad. (Again, see Britain, post 1918).

There’s real danger ins such decline.  See Putin’s post Soviet Russia for one approach to the loss of economic, military and ideological/moral power.

In that context, it wouldn’t surprise me in the least to see Trump, backed by the GOP, launch into a second war of choice in an as many decades, with similarly awful consequences.

But, that said, even though nations find it hard enough just to muddle through a relative decline in international stature, the world goes on, in somewhat different order. That’s happening now. We can’t really stop it.

Or we can dive further the implications of the current GOP program, and watch as our politics become yet more of a zero sum game in which those with the most grab all the crumbs they can, leaving the rest of us to our own devices, while US power dwindles.

And that, by way of the long road home, leads me here: Trump’s GOP* is a fundamentally anti-American party. It is working as hard as it can to deliver wealth and power to a small constituency to the detriment of our national interest. That’s how an organized crime ring acts, not a party of government.

And with that….this thread.  It is open.

*And it is his party, or, if you prefer, he’s the predictable face of what that party has long been becoming.

Images: J. W. M. Turner, The Fighting Temeraire tugged to her last Berth to be broken up, 1839.

after Hieronymous Bosch, The Hay Wain (central panel of a tryptich), between 1510-1520.

Previous Post: « Seattle Meet-Up: Venue Suggestions?
Next Post: I’m here to get my baby out of jail »