I have a banker friend I talk to about the economy sometimes. He told me the housing crisis was coming in 2005 or so (he cashed out too early and didn’t make any money off the whole thing). He’s told me several times that the only thing that matters for the economy is the well-being of the middle-class and that everyone in economics and finance knows that, even if they don’t admit it publicly. I like this quote from William Jennings Bryant that begins a good piece in today’s Washington Post:

“There are two ideas of government,” William Jennings Bryan declared in his 1896 “Cross of Gold” speech. “There are those who believe that if you will only legislate to make the well-to-do prosperous their prosperity will leak through on those below. The Democratic idea, however, has been that if you legislate to make the masses prosperous their prosperity will find its way up through every class which rests upon them.”

We know the story of how the next 30 years went. A few parallels with today are a bit eerie:

In 1926, Calvin Coolidge’s treasury secretary, Andrew Mellon, one of the world’s richest men, pushed through a massive tax cut that would substantially contribute to the causes of the Great Depression. Republican Sen. George Norris of Nebraska said that Mellon himself would reap from the tax bill “a larger personal reduction [in taxes] than the aggregate of practically all the taxpayers in the state of Nebraska.” The same is true now of Donald Trump, the Koch Brothers, Sheldon Adelson and other fabulously rich people.

In a recent University of Chicago survey of 38 prominent economists across the ideological spectrum, only one said the proposed tax cuts would yield substantial economic growth. Unanimously, the economists said the tax cuts would add to the long-term federal debt burden, now estimated at more than $20 trillion.

It’s a strange combination of faux religion and greed that rule us right now:

I’ve said it before: I hope people of faith are right about the afterlife, so that today’s Republican politicians can all rot in hell for eternity.

END_OF_DOCUMENT_TOKEN_TO_BE_REPLACED

Pursuing the Maine chance, Susan Collins is all over a small part of the map on the Senate tax-theft/heath-care-wrecking/federal-overreach/America-gutting  bill. 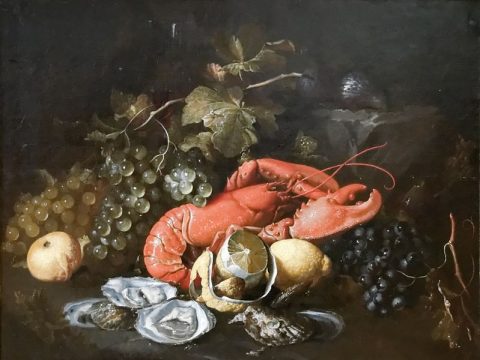 She voted in favor of the motion to proceed, but she’s now signaling that she isn’t yet a solid “yes” on final passage:

Republican U.S. Senator Susan Collins said on Thursday she was not committed to voting for the Senate tax bill, citing concerns over healthcare and a deduction for state and local taxes.

Collins told reporters at a Christian Science Monitor breakfast it would be “very difficult for me to support the bill if I do not prevail on those two issues” but she was encouraged by her discussions with leadership.

Hedge, dodge, waver and waffle:  the net is that she’s still susceptible to pressure.  I think she’s beginning to feel the heat on at least two talking points:  that the bill raises taxes on many, probably most of her constituents, which is a bad place for a New England Republican to be; and that the health care measures she’s been pursuing are fig leaves that will gut her loudly proclaimed commitment to preserving access for all those who have it now.

I called her DC office and left a message and then spoke to a weary staffer in one of her state offices.  I encourage you all to do the same — especially when you can leave a recording that doesn’t necessarily mark you as a non-Mainer.

Image: Alexander Coosemans, Still life with fruit and lobster before 1689.

END_OF_DOCUMENT_TOKEN_TO_BE_REPLACED

To echo something Cole said, I get tired of calling my stupid senators every week and begging them not to kill me or my fellow Americans. Why can’t they just suck less? (Note: this is a rhetorical question!)

But call the assholes we must. I just visited the big network websites, and only NBC had a story above the fold about this shitty plutocrat wishlist masquerading as a “tax reform” bill. Here’s a brief (not at all inclusive) list of why it sucks:

1. The individual mandate repeal would cause health insurance premiums to rise sharply and millions to lose coverage.

2. The CBO estimates the bill’s automatic spending cuts would slash Medicare by $25B annually.

3. It would blow up the deficit by at least $1.4T, providing Republicans with an evergreen excuse to cut popular New Deal programs. (Lil’ Marco has already admitted this.)

4. It would hurt the poor, the middle class, students, retirees, etc., to give rich parasites like the Trumps, DeVoses, Princes, Kochs, Mercers, et al, billions in tax relief annually. Forever.

5. It will exacerbate the already critical problem of wealth inequality and undercut local blue state governments’ ability to assist their vulnerable populations.

I could go on, but the bottom line is, this is a really shitty bill, and it’s deeply unpopular. It’s such a transparent screw-job of a bill that support for it is polling at Crazification Factor levels.

Because Republicans control the government, the odds are against us, but if we can marshal a massive citizen push-back like we did against Trump’s initial efforts to repeal the ACA, maybe we can stop it. It’s worth a shot.

Anyhoo, discuss the tax bill or whatever amongst yourselves. I’ll be contacting Lil’ Marco’s local staff again, no doubt eliciting rolled eyes and hissed comments between interns, such as: “It’s that crazy Cracker person again — it’s your turn to talk to her today, Emma!” “Guh! Nope, it’s your turn, Kaitlyn!”

END_OF_DOCUMENT_TOKEN_TO_BE_REPLACED

Given that it is extremely likely that the individual mandate will be repealed in the next couple of weeks and the rule making for limited duration plan extensions is slowly grinding forward, what will the individual market look like on January 1, 2019?

Right now for someone who has to either buy their insurance on the individual market or go uninsured, there are a couple of broad pathways. They can buy a subsidized or unsubsidized ACA plan, they can participate in a Health Sharing Ministry, get on a three month short term plan or go uninsured.

The individual health insurance market in 2019 will look very different. The Office of Management and Budget (OMB) are processing rules for association health plans and 364 day limited duration plan expansions. Those are plans that can underwrite people out of coverage and limit benefits. The lack of the individual mandate will also increase the price of the ACA community rated, guaranteed issue policies. So what happens?

END_OF_DOCUMENT_TOKEN_TO_BE_REPLACED

Scientists had to delete Urban Dictionary's data from the memory of IBM's Watson, because it was learning to swear in its answers. pic.twitter.com/DkllGLplCp

I, for one, welcome our new SkyNet overlords. Our current “leaders” are failing fast…

The House of Representatives seeks contempt citations(?) against the JusticeDepartment and the FBI for withholding key documents and an FBI witness which could shed light on surveillance of associates of Donald Trump. Big stuff. Deep State. Give this information NOW! @FoxNews

it just hit me what is bugging me about this tweet. he *genuinely doesn't understand he is the president* https://t.co/FJiB2hganQ

Gosh, Ms. Haberman, you sound bitter! Maybe you can rewrite your ‘exclusive access’ Trump bio as a memoir: “Donald, Glenn, and Other Men Who I Let Lie to Me”…

Speaking of professional liars, anyone old/educated enough to remember the Watergate days should’ve known better than to trust a single word out of Roger Stone’s mouth:

President Trump’s longtime associate Roger Stone was in contact with a New York radio personality who had conversations with WikiLeaks founder Julian Assange during the 2016 campaign season, according to sources familiar with the situation.

The radio host, Randy Credico, is the individual Stone referred to as an intermediary between him and Assange. Stone initially declined to reveal his name to the House Intelligence Committee because he said they had an “off-the-record” conversation, though he insisted there was nothing untoward about their conversation. Stone later did privately disclose the identity of the individual to the panel.

Credico received a subpoena this week to appear Dec. 15 before the House Intelligence Committee, something Credico’s attorney Martin Stolar says he “certainly” plans to comply with. Credico tweeted out a copy of the subpoena on Tuesday.

END_OF_DOCUMENT_TOKEN_TO_BE_REPLACED

There is no greater honor than being retweeted by Bowles and Simpson themselves. Both of them.

If Obama had only listened to these two wise men, we wouldn't be in this… https://t.co/WVN88ZmKGv

END_OF_DOCUMENT_TOKEN_TO_BE_REPLACED

He seriously isn't getting enough oxygen to his brain. https://t.co/QhCCD5mwWz

As they say in the news business: Three’s a trend!

There are all these insider anecdotes about the president that read like they’re from a Last Days Of Tyrant Who Lost His Mind kind of book. https://t.co/V863YKfKUV pic.twitter.com/8AE1Ij8wIY

President Trump has expressed certainty that the special-counsel probe into his campaign’s possible collusion with Russia will be finished by the end of the year, complete with an exoneration from Robert S. Mueller III, according to several friends who have spoken with him in recent days.

Trump has dismissed his historically low approval ratings as “fake” and boasted about what he calls the unprecedented achievements of his presidency, even while chatting behind the scenes, saying no president since Harry Truman has accomplished as much at this point…

In all these instances, as well as other setbacks, Trump has sought to paint the rosiest possible picture of his presidency and his character — and has tried to will others to see it his way, like the big-promises salesman he once was.

Sometimes… Trump simply rejects facts — and his own past admissions — as he spins a new narrative. His critics accuse him of creating an alternative reality, though people close to the president say he is simply a savvy marketer protecting his brand, as any businessman or politician would…

The first year of Trump’s presidency has brought tumult and chaos, including the expanding Russia probe, an absence of major legislative achievements and instances of self-sabotage by the president himself. But in recent days, Trump has been in an unusually upbeat mood, according to friends who visited with him…

The NYTimes, of course, prefers to handle the issue more… delicately:

This is quite the paragraph about the president of the United States. https://t.co/w4MN2opktz pic.twitter.com/4MyGCZEAdO