You are here: Home / Anderson On Health Insurance / CHIP and my daughter

2010 was a rough year financially for my family. I had been laid off the previous September. My wife was working part time in a position that did not utilize her skills to the fullest of her ability. We were both looking for full time work in our respective fields and finding nothing.

We also have an amazing (and increasingly not a ) little girl. I was lucky, I was able to spend fifteen months of the most critical developmental time with Elise.

We had a routine and we had fun. Long walk to the library on Monday and Wednesday for story times, bus rides for lap sits and finger plays on Tuesday and Thursdays. Playground time with her little buddies almost every day so that they could toddle and I could talk with other adults. Fridays usually meant we had lunch dates with the moms in the group that we had assembled. I don’t know how much of this routine was for her and how much of it was for me as it was my social life as a stay at home parent.

When I had been laid off, I tried to COBRA my family’s coverage. We had the stimulus subsidy of 65% of the COBRA premium helping, but health insurance was still one of my four unemployment checks for a policy with a $2,500 individual deductible. My wife and I quickly realized that this would blow through our savings and run up credit card debt too quickly. We decided to see what we could find for Elise while we applied for an underwritten plan with a $12,500 deductible, no maternity and a 6 month non-emergency surgery exclusion waiver for under $100. We could not afford a $12,500 deductible but we could probably pay that off over several years if we got a cancer diagnosis.

We applied for CHIP, and after the application ping-ponged back and forth between the Medicaid qualification team and the CHIP team, we put Elise on heavily subsidized CHIP. $25 a month for UPMC for Kids. It had a big network, low co-pays and good customer service. And we barely used it for her. She had her one year old visit covered by CHIP. I betrayed her as I held her down as the nurse gave her the vaccines. Daddy was supposed to protect her. I was not supposed to aid and abet people stabbing her. Ice cream fixed that betrayal.

And then mid-summer came. She suddenly transitioned from being a happy go lucky kid to being a complete cranky pants. In the last week of June she would just sit down in the middle of a walk and cry. She would reach for Mom or Dad to carry her instead of running with the other kids. She was not herself.

We took her to the pediatrician, he saw nothing, but said to trust our instincts. A few days later on the 4th of July, we knew something was not right so we took her to the ER. They X-rayed her and thought nothing too strange was happening and sent us back to our PCP. He saw her again and set up an appointment with an orthopedist as he saw that Elise was not walking right.

Three days later, I took her to the orthopedist. He made funny faces at her and offered her a lollipop as the grown-ups talked. He poked and prodded. He thought he saw something on the original X-ray, and ordered another that focused more on her shin than her ankles. Four minutes later, we had a diagnosis, a green stick fracture. Once he had a clear indicator, he showed me how the ER team missed it as the break had not been obvious.

She got a walking boot. Three odd steps and a high five to the orthopedists, and we were on our way. And then she was back to being a happy kid as we stopped at the mall to let her play in some air conditioned space: 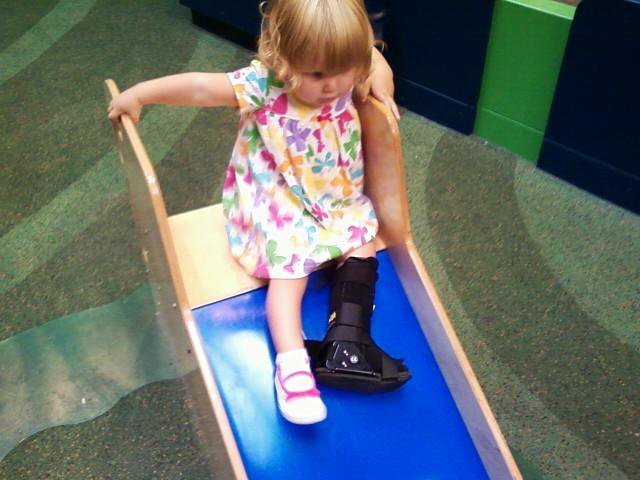