You are here: Home / Open Threads / On the Road and In Your Backyard

These are old photographs from when we first moved out to the country from Charleston, the largest city in the state. Then, in the late 1970s and early 1980s – tobacco farming that a primary occupation of everyone with land and a tobacco allotment, which was part of a Dept. of Ag program to set quotas on the amount of tobacco produced nation-wide, and to set the average price farmers would be paid for their crop by the pound.

Our next door neighbors were Woody and Earl Lawson, who were born and raised here on Lawson Creek. There family was the first people to move into this hollow, which is why the stream is named Lawsons Creek.

Woody was away from the home place for a while when he worked in Ohio as a teamster – running huge horse-drawn farm machines on the big flat farms of Ohio. Eventually he retired and moved home to be with Earl, who was a bachelor Appalachian farmer. They grew nearly everything they ate, and their only cash flow came from the annual tobacco crop. Neither of them smoked or dipped snuff.

One year we let them plant a crop on our bottom, which had been fallow for some time, and they expected a good crop to boost their income that year. These pictures are of the harvest in September, in 1980 give or take a couple of years. They were taken with a Nikon 35mm point and shoot camera, and recently I scanned them, did a minimal amount of cleanup. We’re giving copies to neighbors as xmas gifts, mostly to people who remember the Lawson “boys” and their farm, just west up the hollow from ours.

The federal quota system for tobacco price supports ended years ago, and commercial tobacco farming ended in Lincoln county years ago. We had neighbors who raised as much as 20,000 pounds of tobacco, which sold for around $1.50/pound. Woody and Earl in a good year would produce 2,000 pounds. They may have had nearly 4,000 dried pounds the years they worked a crop on our bottom.

Putting Tobbaco on the wagon

This is the eastern lower bottom of our farm. You can see the old barn in the background, it’s gone now. These sticks of tobacco will be taken up to Earl’s farm and hung between tier poles in a tobacco barn, 5 or 6 tiers high. Men work on the tiers and pass the sticks up to the topmost tier man, 40 feet off the ground.

A neighbor hands a stick of tobacco to Tom Pauley, another neighbor long passed away. Tobacco is cut and spudded onto a tobacco stick through the butt of the stalk and either put into the ground, as on the right of the field, or hung by the field on a rack to dry. It’s pretty heavy to have 5 or 6 stalks of tobacco on a stick when it’s fresh cut. 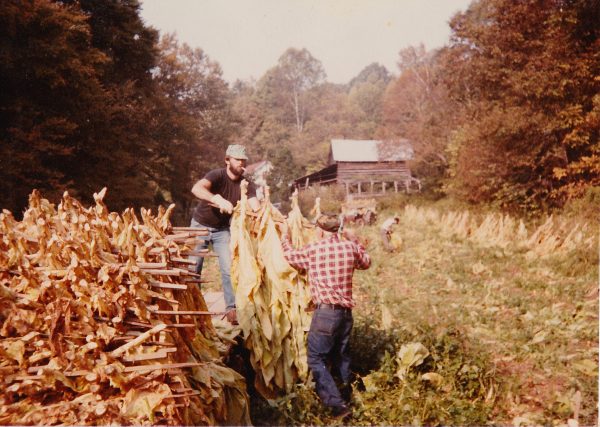 Tom on the wagon

This wagon is getting full now, and soon will be drawn the half-mile up to Earl’s farm to be unloaded. The Lawson farm had 1 large old tobacco barn, built of logs and 2 newer pole barns sided with sheet-metal that were a little smaller. I think everyone helping Earl was a volunteer. Tom was a member of the Union of Operating Engineers, the men who operate really large construction machinery, like the cranes around a new high-rise or bridge, or a dam. He lived just below our farm and grew up in the neighborhood. 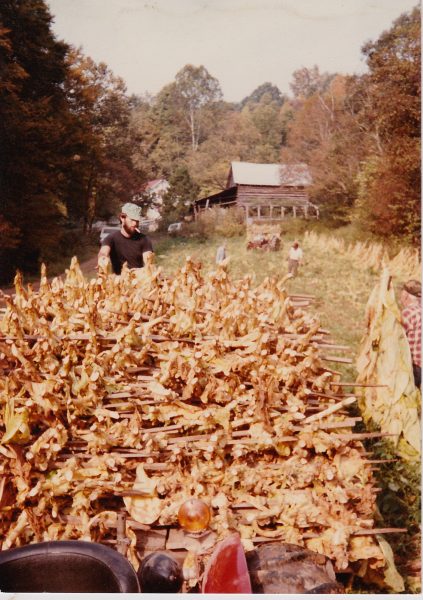 Woody looking at the wagon load

This is one of several wagon loads of tobacco grown on our bottom by Wood and Earl that year. After it cures hanging in the tobacco barn it will turn a golden brown, and it smells great hanging like that, until into the winter. 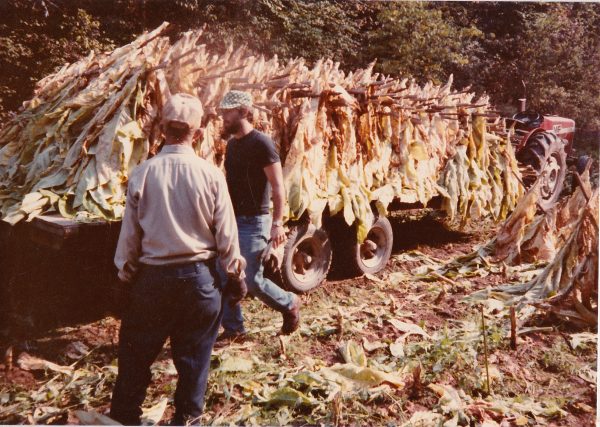 Wood Lawson working in his tobacco

You can see tobacco stalks spudded onto the sticks, which are then put into the ground to hold the tobacco off the ground to dry before being handled into the barns where it will cure. Wood is taking the heavy sticks over to be loaded onto the wagon, and gathering leaves that fall off during the harvest. Those take more handling to get cured, but a big handful of leaves properly cured might bring a couple of bucks. Times a couple of hundred, there’s some more cash income for the year. In mid-winter, after a long curing time hanging in the barns, the tobacco is baled into long rectangular solid bales and taken to the tobacco warehouse, where it will be auctioned off to buyers walking down the rows of each farmer’s product.

I’ve seen tobacco that was probably 20% chicken crap auctioned off for a good price. The yard-birds roost on the tier poles most of the year, but when the barns are filled with tobacco the birds have to roost up against the roof. So some tobacco goes to the auction barns streaked with white. Amazed that the price appeared to be the same, no matter the amount of bird crap involved.

Many years I would drive Woody to the tobacco auction, then by a bank to cash his check, then by a liquor store for Wood’s annual bottle of bourbon. He would drink it on the way home and be plastered on arrival, much to Earl’s dismay. 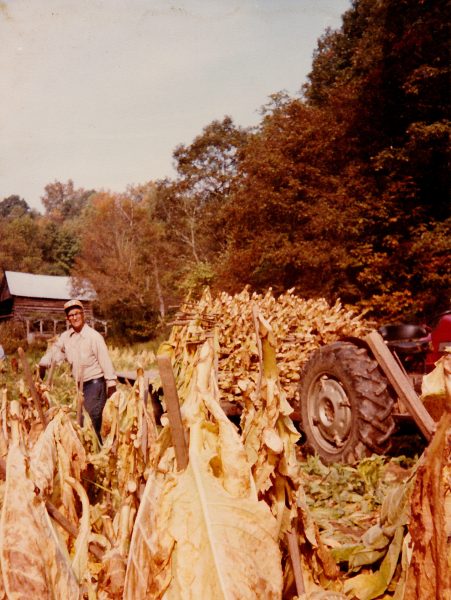 Woody, the tobacco wagon, and the county road by our field.

I wish I had pictures of the tobacco growing in the fields, and hanging in the barns curing. I will never forget that smell, which was the only good thing about the tobaccos crop. It has a rubbery sap that can burn, so most people wear gloves to work harvest. It doesn’t smell good in the field particularly, even when some of it blooms. But curing out, it makes a barn smell great.

Maybe I’ll come across more photos, we have a lot of them from before digital days. I thought the scanner worked well, these were 4×6 photos that have been laying around the house for 30+ years. But it was a Nikon, with a good lens, and there was plenty of detail to work with. I tuned the contrast and brightness a little bit, patched a couple of spots and a place with really dark streaks, I thought for historic pictures it came out well.

Kind of a bit of rural history – there’s still a little commercial tobacco in Kentucky, so maybe next summer I can take a long day trip over that way. And then again in fall for the curing, and winter for the auctions.

The wagon is nearly full, and Woody is tired by now. He’s in his 80s in this picture. You can see there’s more harvest work left in the field. It took several days to get this one field into the barn, and there was still the Lawson field up the hollow, which was at least half again bigger to harvest. It was hard work all year around to make a crop of tobacco. No one does more than a little patch as a hobby today. A packet of seed run $75 and is enough seed for a big field. You plant the seed in a special bed, covered with a special net, and then pull the plants to plant them in the fields in early summer.

In mid summer you have to top the plants to keep the flower from taking all the plant’s energy, so the sap will flow into making the leaves bigger. Frequently you need to spray for insects or mold if it’s a wet summer. Our county tends towards dryer summers, which was good when we grew tobacco here. Then in the fall you use a big tobacco knife to chop the stalk off just above the ground, and use a cone with a needle-like point to spud the stalk onto a long sturdy stick.

After drying a little in the field, you house the ‘bacca in a barn to cure, then strip the leaves from the stalk, carefully because they’re dried and fragile now, and bale them up for market. 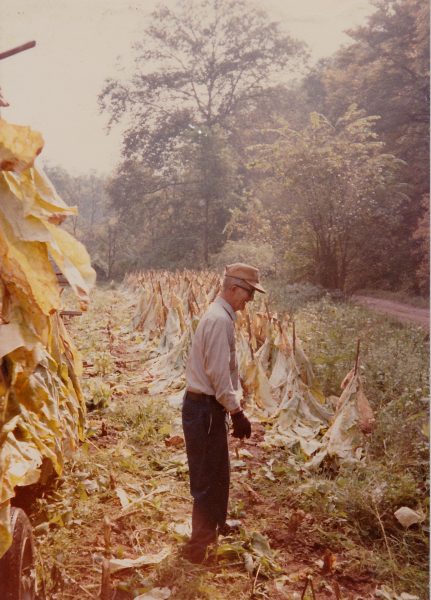