More from JR in WV! Great stuff to start out the week!

A second big stop on our 2008 trip to New Mexico and Arizona and the Navajo Nation. Chaco Canyon National Historic Park is a huge archaeological site with multiple large pueblo-style structures and many smaller sites. Many of the ancient ruins were reburied after being excavated to preserve them from erosion damage.

The ruins still exposed to view are maintained and supported by National Park staff. The largest ruin is called Pueblo Bonito – it is well preserved and mostly excavated. Interestingly, this 1200 room city was built below a giant piece of the canyon wall which was separated and moving away from the canyon wall. It fell in the 1940s and crushed a portion of the city.

We know they were aware of this, while excavating they found symbolic braces intended to ask the wall from falling upon their city – they weren’t sturdy, not intended to hold back the giant boulder, yet while symbolic in nature, they held that boulder away from their city for nearly a thousand years after they abandoned it.

Many of the rooms were in eternal darkness, the deepest rooms were used for burials of powerful individuals. The richest burial contained over 50,000 pieces of individually worked turquoise. Because there were few hearths for cooking, it is thought that the year-round population of these pueblos cities was as low as 80 or 90 people, while at times hundreds or thousands of people gathered for… some purpose, we don’t know why, and will never know why. Ultimate Frisbee?

On the cliff tops and mesas there are cleared straight paths spreading out across the bleak countryside. Perhaps to move logs for the building projects… again, we can’t be sure. Huge labors with no tools but stones. And the masonry work is stunning, straight walls, square corners, level thresholds, round Kiva foundations.

The first ruin, reburied to preserve it

This is the first major ruin you come to after the visitor center. I love this picture because it shows the size of the undertaking and puts it in place in the environment. The canyon is wide and open feeling, but when close to the wall, you understand how small you are in this landscape. 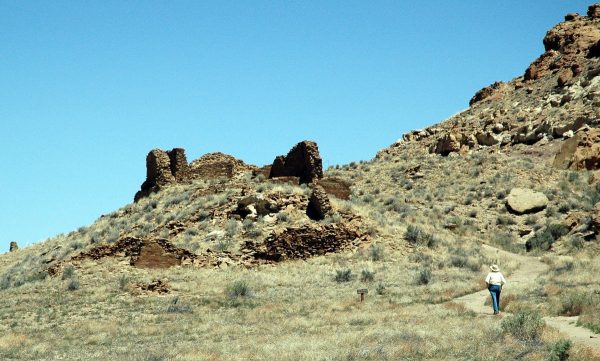 This shows the whole Pueblo Bonito ruin in context with the fallen canyon wall. 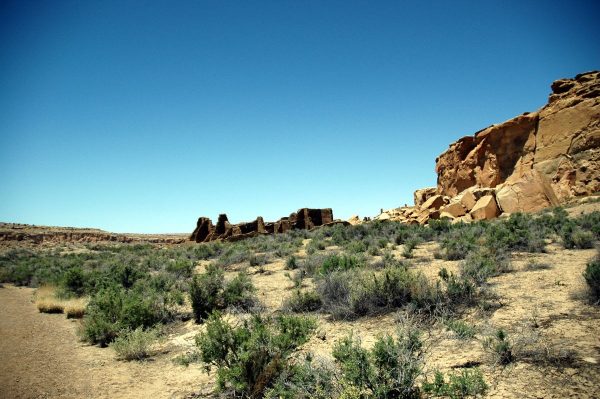 This shows how much internal work there was in this giant building, over 1200 rooms, multiple stories, like a maze, and very little light even around the edges of the structure. 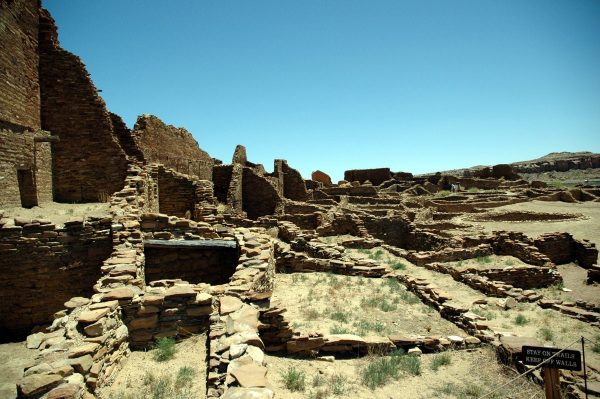 One of the large Kivas in Pueblo Bonito

This is the foundation and sub floor of one of the larger Kivas. Modern Native cultures in this ares still use Kivas, especially the Pueblo tribes. They do not talk about what happens in them.

At one time the Hopi people were outgoing about their historic beliefs, and then one day they all stopped talking to anyone about anything like that.

Of course, what Kivas mean today and what they meant 1200 years ago are almost certainly different. 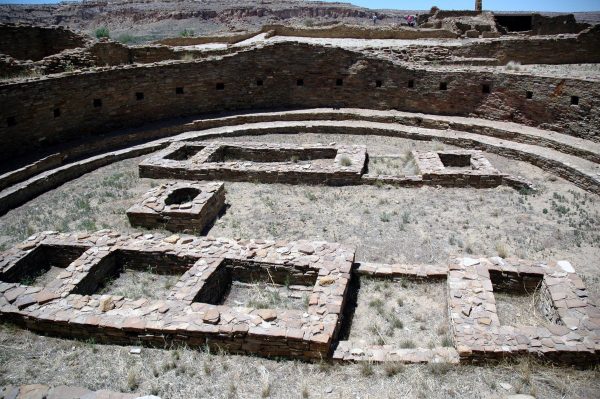 Doorways deep into the building

There are four doorways aligned here. I’m amazed by the straight corners and craft-man-ship. When this was intact, of course, all these rooms would have been dark. Very dark. Now the blinding spring sun shines into these rooms, as it had not for hundreds of years. 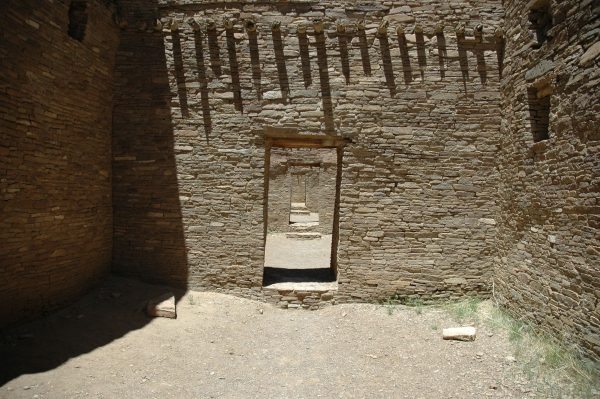 Preservation work at the South Gap into the canyon

This is another Pueblo with stone being mortared onto the tops of the walls. This will keep water out of the wall and slow the effects of deep time upon the ancient buildings.

This National Park employee is almost certainly a member of a nearby Pueblo tribe as their belief structure doesn’t prohibit their presence in places where death in known to have occurred. Very few Navajo would care to be in these places. 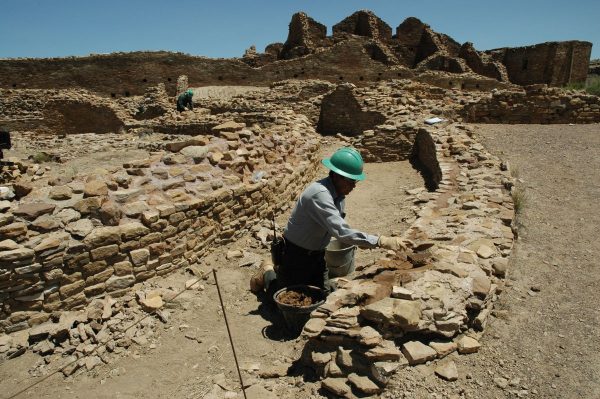 Or just to the top of the canyon wall. We don’t know if the procession went up out of the sacred Canyon, or came down into it, both, or none. But a huge amount of work went into building this stairway.

The bottom appears to have been lost to erosion, which happens even in this desert, but you can see the steps clearly in the top of this niche in the canyon walls.

This image was cropped to feature the stairway better. 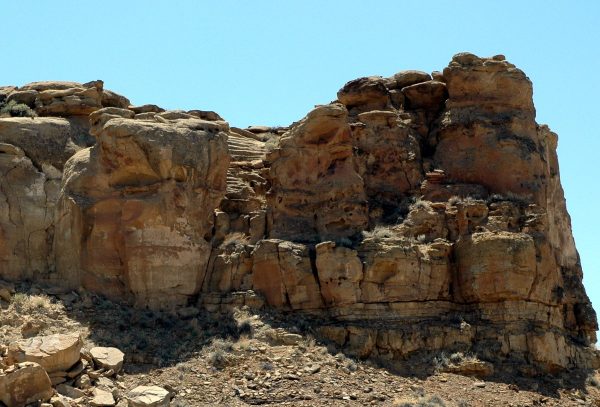