You are here: Home / I think you make yourself a victim almost every single day

This is a good piece by Adam Serwer. And what he’s saying about the FBI is true of all of institutions, especially the media:

Republicans, insulated from the potential backlash by the very “law and order” voters who put them in office, are willing to attack the FBI publicly as a covert political tool of Democrats in a way that the opposition party simply is not.

That asymmetry means that the FBI often responds to Republican or conservative criticism differently than it responds to criticism from Democrats. As I wrote in May, the FBI’s attempts to shield its reputation for political independence from conservative criticism has resulted in its actual political independence being compromised. Comey’s July 2016 press conference excoriating Clinton, and his subsequent public letter announcing the investigation had been reopened, were attempts to pre-empt conservative criticism that the FBI was biased. Several FBI officials have been demoted or pushed out of the bureau because their actions or views might be taken as biased by Trump officials or their allies. Attorney General Jeff Sessions, whose Justice Department oversees the FBI, has been largely silent in the face of the conservative attacks, despite his frequent jeremiads against alleged liberal demonization of law enforcement. Behind the scenes, rather than defend the bureau’s independence, he has urged Trump’s hand-picked FBI Director Chris Wray to acquiesce to the president’s public denunciations of FBI officials.

What do to about this? You probably know what I think: if the media and the FBI cave in every time a conservative hits them, liberals need to start hitting them too. That will never happen, but it would be good if the totebagging masses started to understand the dynamic that’s at play right now.

And let’s try to reach our goal for Conor Lamb in PA-18 today. 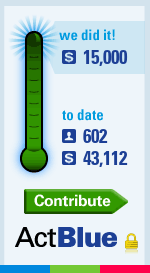