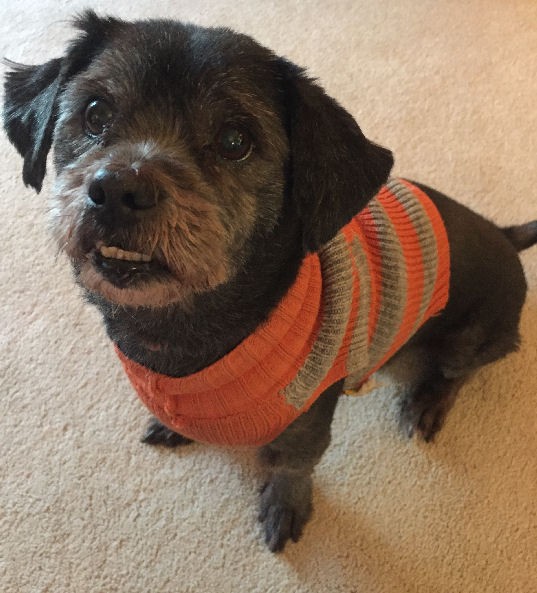 Our dog Huxley, a 20 lb shi-tzu or pekingese mix, needs a new home. We got him from a shelter in 2010 and he clearly wasn’t treated well. He’s sweet, playful, loves to cuddle in bed. He’s crate trained. He barks a lot-cars pulling up, other dogs, sirens, mosquito farts…

After a family vacation where we stayed with relatives and their two delightful shih-tzus in 2010, we thought maybe it was time to add a dog to our family. Our kids were 3-5 years old, and we wanted a pet they could grow up with, so after talking it over for a few months, we decided to visit the local animal shelter where we met Huxley. Huxley is a small, gray, mixed-breed dog who looks a lot like Wicket when his fur grows out (and in retrospect, I think this would be a more fitting name for him). 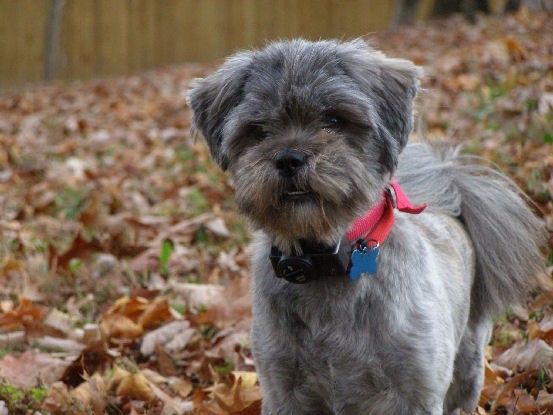 When we adopted Huxley, our vet said that he probably had some Pekingese and/or Shih-Tzu in his bloodline and that he was fairly young, under three years old. He was in good health, and we welcomed him into our family and got some basic training (sit, stay, down, leave it, etc.). The only issue that arose was that he’d snuggle down by the sofa when the kids were up there reading or watching television. They’d hop off, and often land on him, and he began snapping at their heels. We worked with dog and humans to be more aware of each other, and to have positive and fun interactions, and all was well.

In Spring of 2013, when I was TDY for training for six months, Huxley got out and tried to outrun the garbage truck and my wife watched, horrified, as he went under the wheels. Our vet pieced him back together and he’s now a bionic dog, thanks to the metal pin in his leg. I said earlier that Huxley likes to bark (Car! Dogs! Far-away train! Squirrel! Leaf!), but I’ve never heard him bark at anything else the way he barks at that garbage truck.

He’s wary of strangers, especially men, and several times he’s growled at someone new who’s reached out to offer a friendly pat. Huxley has always been leash-aggressive, but off-leash he does pretty well around other dogs, though he generally plays only a little and stays mostly to himself. He’s a little anxious, and a little neurotic…we suspect he was not treated well in his formative years, but he’s generally a sweet little snuggly dog.

Once we got things sorted with the sofa and nipping, Huxley has gotten along well with our two kids. They are now 9 and 11 and have participated in feeding, brushing, walking, and playing with him. Now, if they start running around and getting loud; he responds to that excited energy by barking, and jumping and just getting more and more wound up. We can calm him down, but it’s just part of his makeup to get wound up when there’s a lot of noise and excitement. We send the kids outside if they’re running or yelling, which helps everyone. If the kids have more than 2-3 friends over, though, we usually have to put him up in the bedroom unless two adults are home, because keeping him calm is a full-time job. If he’s overexcited, we know he’s not in control of himself, and given his other aggressive proclivities outlined above, we’ve just never wanted to take a chance. We sedate him for birthday parties.

This fall, he nipped our 11yo on the ankle, unprovoked. Our son was tucked up in a chair reading, and when he got out of the chair, Huxley ran over, nipped him on the ankle, and ran away. We talked about this with our kids, and how we can’t have a dog who bites, even a nip, because he could really hurt someone.

A day or so later, he started limping, so we took him to the vet and the found he had a fractured hip. After some consultation, they pulled out the old X-rays from his garbage truck incident and determined that he’d had a hairline fracture that had been missed with all the other injuries. He was on anti-inflammatory meds for a few days, but seems to be back to normal.

The kids made the point that maybe he was in pain and that was why he did this, so we continued to talk about it. It’s not an easy thing to give away a dog who has been part of your family for 7.5 years. Then a month ago, he did it again…nipped the 11yo on the ankle, unprovoked, so we set ourselves to the task of finding him a home, preferably one without kids.

His ideal home would be one where someone is home for at least part of the day most of the time. He would love to have a small yard where he can run around and bark at squirrels, and an owner who will take him for walks and throw things for him to chase (though he has never figured out how to bring it back). He can be left alone for the day, but he likes the company. He spends most of his day napping, or following us around the house as we engage in our daily activities.

All of the no kill shelters in the area are full, and I can’t find a good home using my network. We contacted a local senior dog rescue to find they only accept dogs from shelters. We’ve asked family/friends, and plan to talk with our vet. We want to find him a home where he’ll be loved.

We live in the Nashville area, but I would be willing to drive a good ways.

If you have any suggestions, or know someone who might be interested, leave a comment. Or contact me directly, using the ‘Contact a Front-Pager’ form under ‘Quick Links’ from the top bar, or directly at annelaurie (dot) bj (at) gmail (dot) com, and I’ll forward your message to Gary. 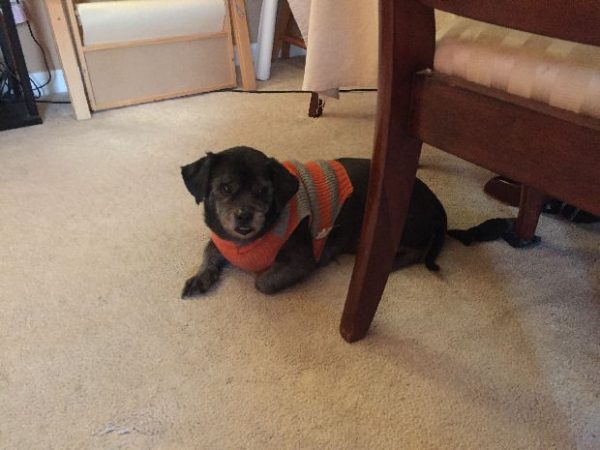