You are here: Home / Open Threads / Copenhagen and Cambridge 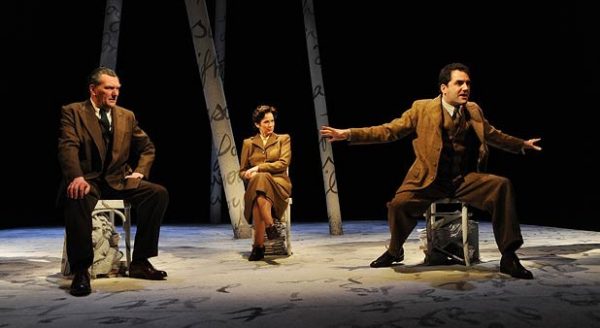 Over the weekend, I went to a reading of Michael Frayn’s “Copenhagen.” When I came home, I saw this long Twitter thread.

I’ve long been annoyed with what I often refer to as “Silicon Valley boys.” It’s becoming more acceptable to say that out loud, and I occasionally do on Twitter. The shallowness of their exhortations for everyone to learn coding, their ignorance of human relations, and their belief that they can change the world for the better with code alone are at best naïve.

Revelations of Facebook’s ethics-free policies in taking advertising and manipulating its users have been dribbling out for over a year. Christopher Wylie’s insider view of Cambridge Analytica and Britain’s Channel 4 investigation have made questions of responsibility impossible to ignore.

Gender and status hierarchies are a big part of this story, but I will discuss them in later posts. Let’s start from Yonatan Zunger’s historical framework. Zunger notes that chemistry and physics collided with ethics after heady periods of progress. Now it’s computer science’s turn.

In the late 19th century, chemistry made great strides. A part of chemistry was called “organic” because it was believed that certain compounds could be produced only by living things. The chemistry of carbon retains that name still. In 1828, Friedrich Wöhler synthesized urea, which mammals excrete in urine. That opened the way to industrial synthesis of many compounds, including drugs that would make people healthier and dyes that made the world more beautiful.

Fritz Haber developed a way to make ammonia from the air, laying the basis for the fertilizer industry. No longer was farming limited by the availability of animal manure. Haber was awarded the Nobel Prize for that. Most of the world depends on his process for food.

And then. The chemistry of nitration is fascinating. Fuming nitric acid adds an –NO2 group to molecular carbon skeletons. It’s fun in the lab and theoretically interesting. Dissolve cellulose in nitric acid and get a transparent film that burns readily. Dissolve glycerin, a byproduct of soap-making, in nitric acid and get nitroglycerin, an explosive liquid. Alfred Nobel tamed that liquid by soaking it into diatomaeceous earth. Tubes of dynamite, as he called it, could be used to, say, remove tree stumps. Even more powerful were trinitrotoluene and other nitro explosives.

They were used in war, too, of course. During World War I, Fritz Haber developed chemical weapons for Germany. Later, in penance for his destructive discovery, Nobel endowed a prize that carries his name for peaceful scientific inventions.

The structure of the atom and its sub-particles developed between the two world wars. It was a heady time for physicists, and their work was received with popular acclaim. Albert Einstein became a celebrity, and relativity became a buzzword. The way atoms are popularly pictured is the Bohr atom, described by Niels Bohr. Quantum mechanics is a fascinating subject that changed how scientists viewed matter.

And then. Germany was on the march, determined to reciprocate for the heavy penalties inflicted on it by the Treaty of Versailles, which ended World War I. Experiments indicated that adding a neutron to a uranium nucleus could make it split and release energy. Scientists recognized the implications of this for a weapon, and most treated the information as sensitive. The governments involved in the war, with the urging of those scientists, initiated programs to investigate the possibility of such a weapon.

This is where the action in “Copenhagen” begins, through the recollection of the dead participants, Niels Bohr and his wife Margarethe, and his former student, Werner Heisenberg.

Bohr and Heisenberg were major participants in those heady days of the 1920s. They developed their theories in opposite ways, but came to similar conclusions. The play presents their joy in the development of their science through argument.

Heisenberg visited the Bohrs’ home in Copenhagen in September 1941, when Denmark was occupied by the Nazis. Heisenberg was in charge of the Nazi program on atomic energy. We do not have documentation of what happened in that meeting, only speculation. After the meeting, Germany failed to develop an atomic bomb. Bohr escaped from Denmark in 1943 and helped the Americans develop an atomic bomb.

The play explores what might have occurred during the meeting and the men’s motives. Margarethe takes the role of the chorus in Greek plays: she explains background to the audience and exposes and questions motive.

The discussion between Bohr and Heisenberg veers from their disagreements on physics through their personal friendship and skiiing to the moral considerations of building atomic bombs. Those last continue today, with no easy resolution. Frayn, by putting them into a conversation, deeply communicates how impossible the choices are that nevertheless must be made.

The realization that exciting new technologies could be used for evil as well as good came to chemistry and physics as a result of wars. National survival was a factor in the ethical questioning.

But we are in peacetime now, relatively speaking. No national power threatens Facebook or Cambridge Analytica or their countries with the force of arms. Their motivation has been making money, which we have come to believe is an ultimate good. They have set policies, while the physicists could blame the politicians. But their actions have led to international political results and may have led to deaths as well. Computer scientists are only beginning to recognize their roles in these actions.

Two people, Christopher Wylie and Sandy Parakilas, have come forward to expose the misuse of data supplied to Facebook by its users and Cambridge Analytica’s part in that. Presumably these two are beginning to see the moral side to their actions.

The official stands of Facebook and Cambridge Analytica are that they have done nothing wrong. They are resisting transparency in a way that many involved in the chemistry and physics of weapons of mass destruction did and still do. Mark Zuckerberg and chief operating officer Sheryl Sandberg failed to attend an internal Facebook meeting on the scandal. Zuckerberg’s statement fails to address the repercussions of his invention.

Coding, like quantum physics, can be a high. Manipulating the abstractions, the power of the results to make things happen are heady. It’s hard to believe that, like everything else in the world, it has a dark side. Some in the profession will come to contemplate the issues chemists and physicists have struggled with for a century and more. Some will not.

Photo from a production of “Copenhagen” at the Royal Lyceum, Edinburgh