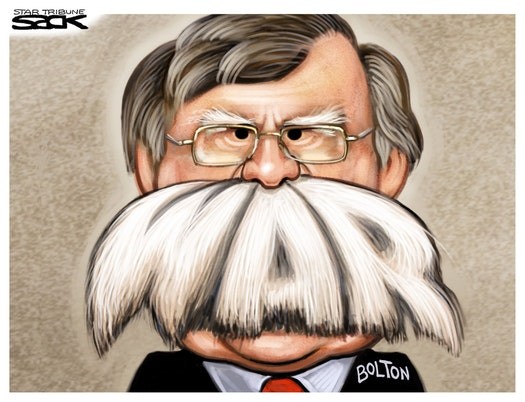 When thinking about John Bolton as National Security Advisor, we should keep in mind that there is no reason for war between the US and North Korea or Iran. Iran has adhered to the Joint Comprehensive Plan of Action (JCPOA), and the other six signatories are satisfied with the situation. It is testing missiles and is engaged in the war in Syria, which are a concern but not subjects of the JCPOA. North Korea has the capability to build thermonuclear warheads and mount them on missiles, but the numbers are few, and its leaders seem willing to talk.

The cause for talk of war is President Donald Trump’s belligerence. Without that, there are ways forward that do not involve war. Unfortunately, John Bolton has never met a war he didn’t like.

Bolton thinks that the Iraq war was the right thing to do. Now Iran and North Korea are at the top of his to-war list. Iran is much larger and better-defended than Iraq was in 2003, and a war with North Korea would mean the destruction of much of South Korea, damage to Japan, and possibly a nuclear war. Bolton has never considered diplomacy as a part of international relations. He is also connected to the Mujahideen-e Khalq (MEK), a radical Iranian group that wants regime change.

He has no place in the United States government. But Trump is in the process of removing the advisors who might have supplied some restraint on his impulsive and emotional responses, and has settled on Bolton as the person to coordinate his foreign policy. The position of National Security Advisor is not subject to Senate approval.

Trump has fired H. R. McMaster, Rex Tillerson, and David Shulkin in the past couple of weeks. Ben Carson and Scott Pruitt have been rumored as endangered. Replacements will have to be confirmed by the Senate, which will be more difficult than the first time around. Bolton is expected to fire any national security council staff that disagree with him, as he has in previous jobs. That will undercut planning for a summit scheduled in May with Kim Jong Un, and perhaps another with Vladimir Putin. It is hard to see how the White House can plan for Trump’s meeting with Kim Jong Un in May.

But Trump has stated that only he matters in foreign policy, and he is acting like he believes that. Presumably that is the way he ran his business. He would make a pronouncement, and his underlings would rush to make it happen. He would get credit for the successes, and they the blame for the failures. How will Bolton fit into that? Bolton’s and Trump’s views do not completely overlap. Both are famously stubborn about those views.

In 2010, Bolton wrote the foreword to anti-Islam activist Pam Geller’s book, The Post-American Presidency: The Obama Administration’s War on America, and has appeared on her radio program. He also chairs the Gatestone Institute, a nonprofit that publishes material related to the supposed threat that Islam poses to Western society. That fits with the administration’s anti-Islam stands. Bolton’s extreme animus toward North Korea and Iran also fits with Trump’s predelections, as does his preference for military action over diplomacy.

Bolton, however, is extremely hawkish on Russia. Bolton has called Russia’s meddling in the election an act of war and wants them to “feel pain.” On the other hand, he appeared in a gun rights video to be used in Russia. Bolton says that he did not know that was the purpose of the video. Trump famously has refused to say anything negative about Russia or Vladimir Putin. This could be a source of conflict with Trump’s reluctance to say anything bad about Russia and Putin.

Bolton’s views are so extreme that a Republican Congress refused to confirm him as ambassador to the United Nations under George Bush. Instead, Bush appointed him during a Congressional recess.

Bolton is reported to be both adept at manipulating the bureaucracy and failing badly at it. He is more experienced in the bureaucracy than many of Trump’s appointees, to be sure. The contradiction can be explained by Bolton’s reputation as a “suck up, kick down” manager. He fires people who don’t agree with him. That can produce smooth operations for a time, but usually ends badly.

It’s possible that Bolton is another of Trump’s feints and facades. A superhawk as NSA will frighten the liberals along with North Korea and Iran. Put them in their places and scare them into negotiations. That seems to be both Bolton’s and Trump’s theory of negotiating. Unfortunately, it can lead to miscalculations and rapid escalation to war.

Mike Pompeo must be confirmed as Secretary of State. He and Bolton will be a warlike pair. Voters may be able to insist that their senators hold up Pompeo’s confirmation if Bolton is to be National Security Advisor. A round of firings within the National Security Council will probably result in more people going to the media with their experiences in the Trump White House, none of which is likely to be good news for Trump. The chaos of continuing reorganization will slow other actions. It is becoming more difficult for Trump to find replacements for those being fired, but that may be favorable to his theory of “La politique, c’est moi.”

Another potential legislative block is through Congress requiring an Authorization for the Use of Military Force for any further military action. Representatives Justin Amash (R-MI) and Barbara Lee (D-CA) are pushing for debate on an AUMF, but most of Congress would rather duck that responsibility. Perhaps as war fever heats up in the White House, they will change their minds.

A last resort will be demonstrations in the streets. And, of course, vote them out in November.

Cartoon by Steve Sack for the Minneapolis Star-Tribune.