Adam here filling in for Alain, who was unable to schedule today’s road and yard post. Road and yard is also my suggestion for the PRC’s next development program should belt and road not work out.

Since I have no idea what Alain was planning to post picture wise, I thought I’d put up some pictures from when I was deployed in Iraq.

This is the Arch of Kesra. It is the largest, free standing parabolic arch in the world. It is on the Steya Peninsula just outside of Salman Pak. It was the palace and throne room of one of the Persian dynasties that once ruled Iraq, what is now Iran, and other parts of the Levant. The wings are actually reconstructions that Saddam Hussein had built when the original ones collapsed. 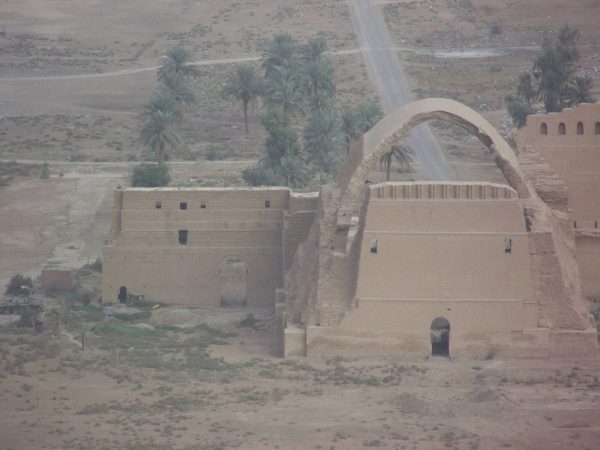 The king’s crown was actually suspended from the center of the arch and would remain in place while he sat below it on his throne. According to tradition there is a hidden set of passages, including a tunnel underneath the Tigris, that connected the arch and the Kesra palace with another complex on the west bank of the Tigris. Whatever was once there is now long gone as the west bank of the Tigris are just part of the agricultural fields that belong to the Batawi tribe, who live along this part of the river in both Madai’in and Mahmudiya Qadas. A qada is an agricultural district. There are five of them that surround the city of Baghdad. 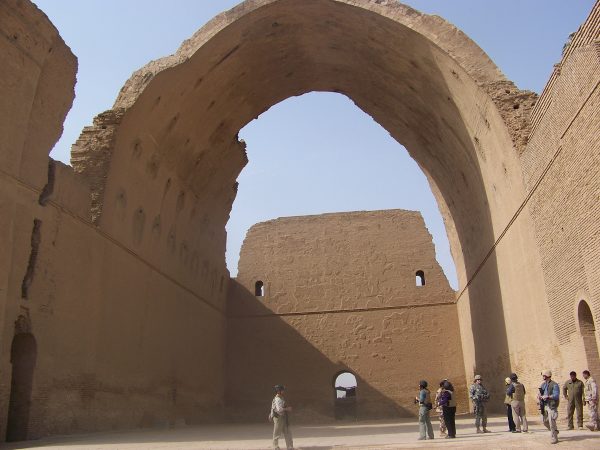 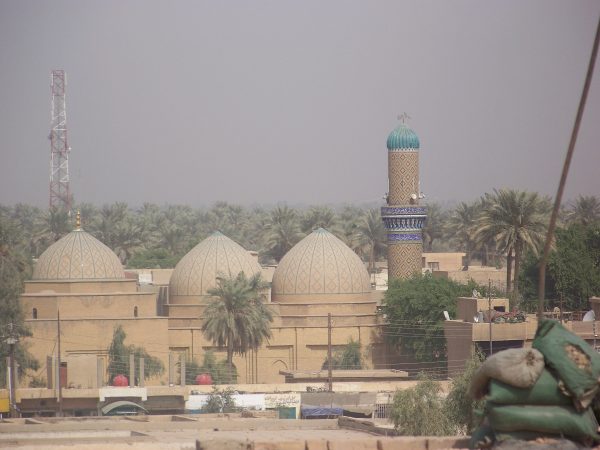 When I was deployed to Iraq the mosque was closed. This also meant that a good portion of the market was closed as the external facing portions of the mosque include an open air arcade that would, in better times, have been filled with shops. The mosque was closed because of a dispute over whether it should be a Sunni or Shi’a mosque. But the fight was less about the differences in prayer rituals between Sunni and Shi’a Muslims and much more about who would control the waqf – the endowment that controls the mosque, the arcade outside it, and a large portion of the residential, commercial, and agricultural real estate in Salman Pak.

This is the Tigris River between the city of Baghdad and Salman Pak. I took this from the Blackhawk while we were on our way back from the visit to the Arch of Kesra. 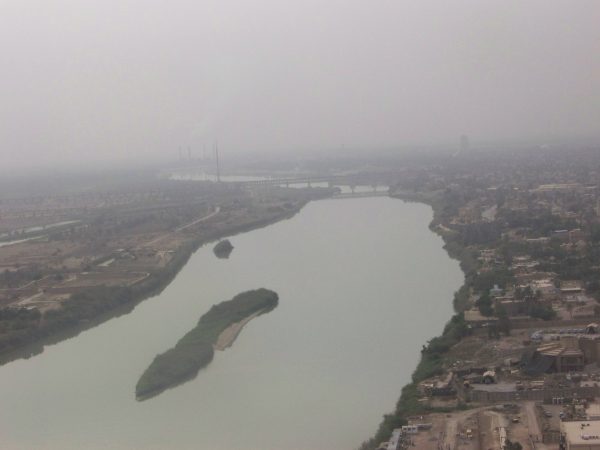 The haze is from a combination of burning heavy fuel oil in generators and the fact that a lot of the more rural areas of Iraq were bone dry, leading to lots of dust, dirt, and grit in the air.

The picture below is of the east bank of the Tigris in Madai’in Qada. 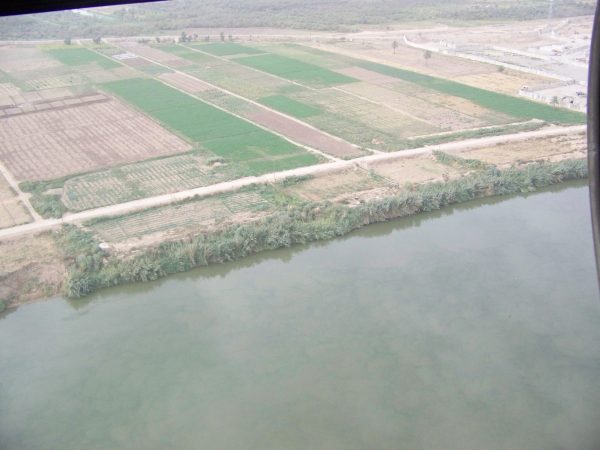 Unfortunately when I was there in 2008 the electricity was not running enough for the pumping stations to push water from the river into the primary, then the secondary, and then the tertiary irrigation canal. As a result, within 1o kilometers or so this part of the breadbasket of Iraq and the birthday place of western agriculture quickly turned into this: 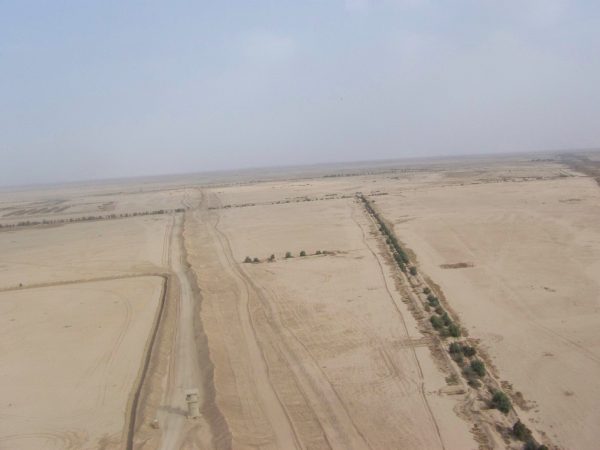 And here’s a dust storm in Iraq. Given that everything was sort of pink to orange, this was also part of our preparations to liberate Mars by winning hearts and minds or something… These were all taken from just outside my quarters at Forward Operating Base Hammer, which was out in the middle of nowhere. 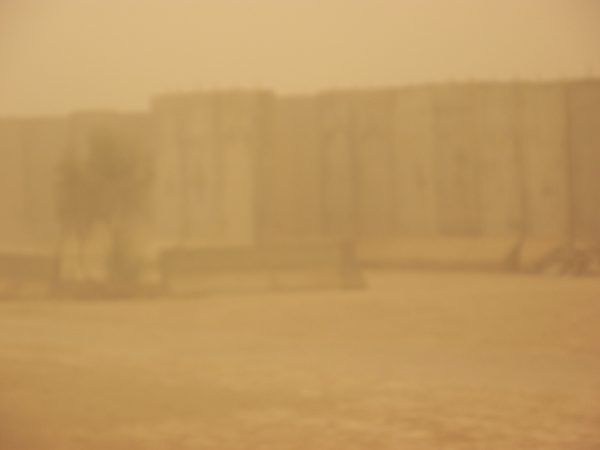 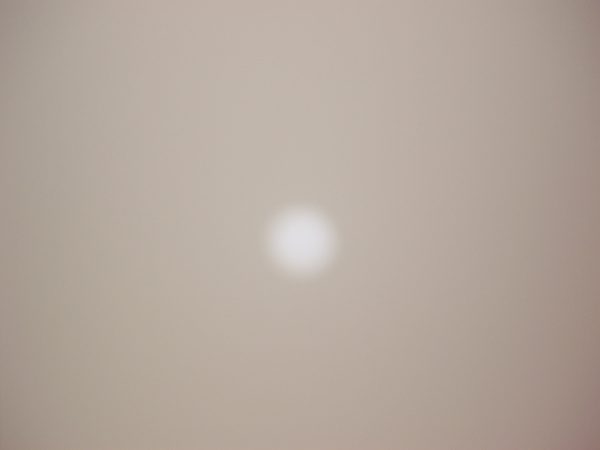 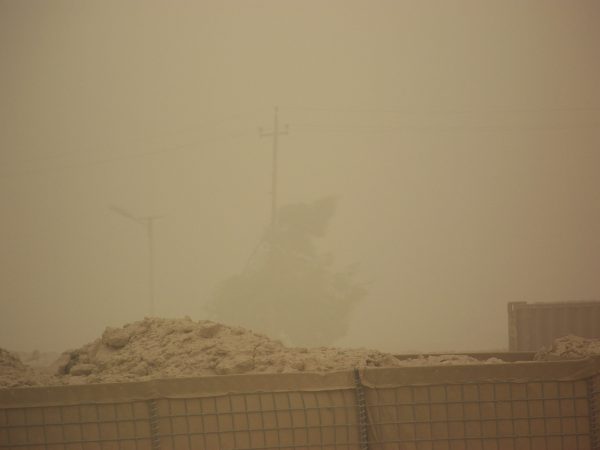 (Hesco barriers and one of the few trees on the base) 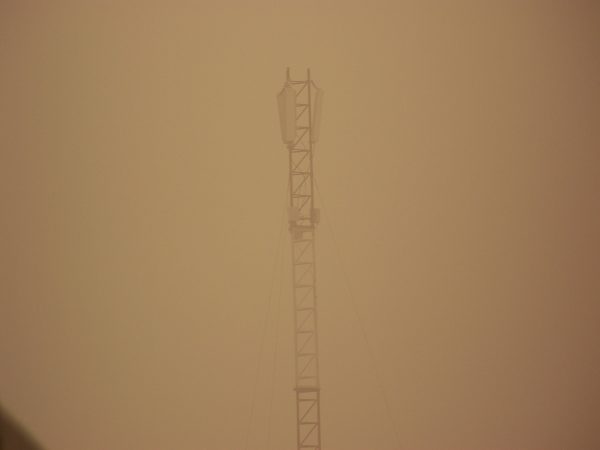 This last picture was the beginning of a partial lunar eclipse. It is the only decent shot I got. This was taken from a patrol base in the Four Corners area. Four Corners is called Four Corners because it is where the Besmayah Range Road crossed the major north-south road that ran from Jisr Diyala up to Diyala. 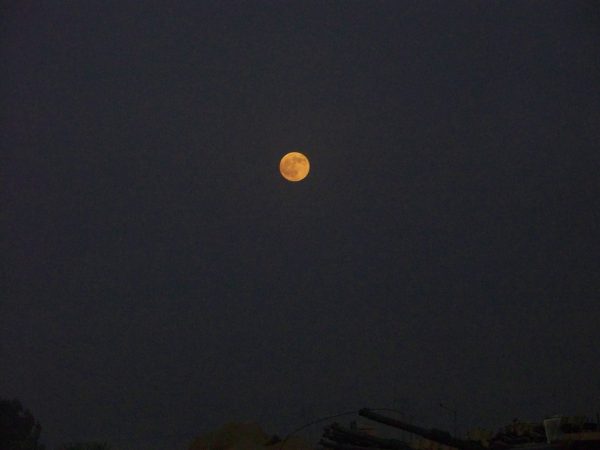 Previous Post: « Wednesday Morning Open Thread: We’re On Our Own
Next Post: Do we need more hobbits in medicine? »