Paul Waldman, at the Washington Post, “A scam of a party says goodbye to its top fraud”:

… The proximate cause of Ryan stepping down is that his party looks increasingly likely to suffer an electoral disaster in November’s midterm elections. He is facing an unusually strong challenge from Randy Bryce, the likely Democratic nominee in his Wisconsin district, so he probably calculated that there were two realistic outcomes for him. The worse one would be that he is defeated while his party loses the majority, as happened to then-speaker Thomas S. Foley (D-Wash.) in 1994. The better one would be that he holds on to his seat while Republicans lose the majority, which might not be better at all. Being speaker may have meant plenty of headaches for Ryan, but being House minority leader is a total drag; you still have to manage your unruly caucus, but you have no real power and can’t make any progress on your agenda…

For years, Ryan has presented himself as someone deeply concerned with fiscal discipline, committed to getting America’s books in order. As anyone with any sense realized, this was a scam: Like all Republicans, he used the deficit as a bludgeon against Democratic presidents, then forgot all about it while a Republican was in office.

At the same time, Ryan — a lifelong admirer of Ayn Rand, the philosopher of selfishness — dreamed of destroying the safety net, eviscerating Medicaid, privatizing Medicare, slashing food stamps, and generally making life in America more cruel and unpleasant for all those who aren’t wealthy.

But as Paul Krugman observed, Ryan failed at both his pretend goal and his real goal. He will leave office after setting the deficit on a path to exceed $1 trillion in 2020, and yet, he failed to repeal the Affordable Care Act and didn’t even bother to wage an assault on Medicare, almost certainly because he knew how disastrous it would be for his party.

So what does he mean when he says “I have accomplished much of what I came here to do”? He can only mean the tax cut Republicans passed last year. In other words, engineering a giant giveaway to corporations and the wealthy was enough for Ryan to say “My work here is done.”…

The press gives Paul Ryan way too much credit. He is as responsible for the current state of the Republican Party as any person walking the planet. He repeatedly chose to co-opt the nativism in the party instead of confront it. https://t.co/KmfGG1liRx

Osita Nwanevu, at Slate, on “The Wolf in Wonk’s Clothing”:

… [I]t’s worth revisiting now, as Ryan prepares his exit from politics, the thrust of the argument that the tale advanced—that, in general, the 20 million children in this country who receive free lunches have parents who clearly don’t care about them and that in providing food to those children, the government enables bad parenting. That sweeping judgment is impossible unless one considers poverty and economic hardship themselves personal failings. For about a decade now, Ryan has demonstrated that he believes precisely this—that those who have trouble making their way in the world are personally defective, that those immiserated by circumstance have willingly surrendered their lives to dysfunction, and that the best remedy society can offer to those who lack is to deprive them, in cuts to already meager social programs, of even more.

Shaping that dogmatism into pseudo-wonkery has taken years of wild and reckless obfuscation. Most of the analyses of where Trump “came from” have sought and found precedents for his open xenophobia, conspiracymongering, and boorishness in the rhetoric and behavior of Republican politicians in the recent past. But his mendacity and the constant consequence-free dissembling of his administration still baffle all those who’ve wondered aloud, over the past year and a half, how we so suddenly entered a new age of “post-truth” politics. We haven’t, really. Paul Ryan understood, like Trump, the extent to which the norms governing conventional political journalism have always been poorly equipped to handle naked and persistent dishonesty and disingenuousness. His speech to the 2012 Republican National Convention was littered with blatant lies…

Ryan showed, too—long before Trump was taken seriously—the political possibilities available to those brazen enough to openly call large swaths of the population leeches. It is scarcely mentioned, even in criticisms of Ryan’s proposals, that his ideal policy regime, like Trump’s, would upend the lives of millions of minorities or that the project of welfare reform, which Ryan, by his own admission, signed up enthusiastically for in his youth in the late 1980s and early 1990s has historically been animated by straightforward racism. All told, Ryan’s most lasting legacy may be his role in helping the conservative movement launder its messaging against anti-poverty programs—once freighted with obviously coded tall tales about welfare queens—into tidier, more superficially respectable rhetoric…

Paul Krugman, “The Paul Ryan Story: From Flimflam to Fascism”“:

…I do have some insight into how Ryan — who has always been an obvious con man, to anyone willing to see — came to become speaker of the House. And that’s a story that reflects badly not just on Ryan himself, not just on his party, but also on self-proclaimed centrists and the news media, who boosted his career through their malfeasance. Furthermore, the forces that brought Ryan to a position of power are the same forces that have brought America to the edge of a constitutional crisis…

Look, the single animating principle of everything Ryan did and proposed was to comfort the comfortable while afflicting the afflicted. Can anyone name a single instance in which his supposed concern about the deficit made him willing to impose any burden on the wealthy, in which his supposed compassion made him willing to improve the lives of the poor? Remember, he voted against the Simpson-Bowles debt commission proposal not because of its real flaws, but because it would raise taxes and fail to repeal Obamacare…

So how did such an obvious con artist get a reputation for seriousness and fiscal probity? Basically, he was the beneficiary of ideological affirmative action.

Even now, in this age of Trump, there are a substantial number of opinion leaders — especially, but not only, in the news media — whose careers, whose professional brands, rest on the notion that they stand above the political fray. For such people, asserting that both sides have a point, that there are serious, honest people on both left and right, practically defines their identity.

Yet the reality of 21st-century U.S. politics is one of asymmetric polarization in many dimensions. One of these dimensions is intellectual: While there are some serious, honest conservative thinkers, they have no influence on the modern Republican Party. What’s a centrist to do?

The answer, all too often, has involved what we might call motivated gullibility. Centrists who couldn’t find real examples of serious, honest conservatives lavished praise on politicians who played that role on TV. Paul Ryan wasn’t actually very good at faking it; true fiscal experts ridiculed his “mystery meat” budgets. But never mind: The narrative required that the character Ryan played exist, so everyone pretended that he was the genuine article…

Paul Ryan somehow denies this, but he routinely normalized Trump and enabled his takeover of the GOP. It played out right in front of all of us. https://t.co/BAsGpI3M9L pic.twitter.com/ynltB4PpvZ

Matt Yglesias, at Vox, “Donald Trump sold out to Paul Ryan, not the other way around“:

I’m not a big Paul Ryan fan, but one particular kick in the pants the speaker of the House is getting on his way out the door is unfair. It’s simply not the case that he sold out to Donald Trump or compromised his principles in any way. If anything, it’s just the opposite — Trump abandoned his stated views on a wide range of policy issues in order to bring himself into close conformity with Ryan’s ideology and policy agenda…

… On substance, Trump has embraced Ryan’s vision of lower taxes on the rich and a stingier welfare state, even though he campaigned promising the opposite. Ryan has indulged Trump on a personal level without abandoning any of his longstanding policy views. It’s true that Ryan has had limited success in enacting his agenda, but the impediments there have uniformly been in the United States Senate, not the White House. If anything, the Trump administration is quite loyally plugging away at Ryan-esque goals that the president never articulated as a candidate.

But while it’s unquestionably true that the self-presentation of the GOP in 2018 and beyond looks a lot more like what Trump was doing in 2015 than what Ryan was up to three years ago, the policy agenda of the GOP hews much closer to Paul Ryan’s “Better Way” blueprint than to anything Trump said as a candidate.

The critique now, ironically, is rooted in the same style-over-substance pathologies that led so many journalists to overrate Ryan for so long — an inclination Ryan was shrewd to exploit… 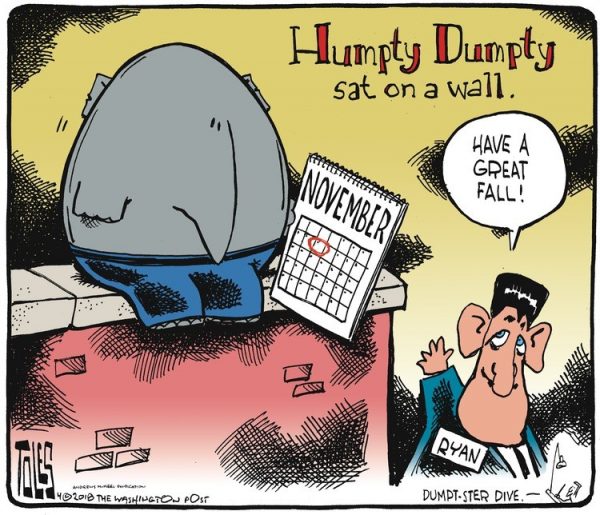 …[W]hile Ryan is leaving town after setting the Treasury on fire—something he pretended to care about under Barack Obama, when tax cuts weren’t on the line—his personal financial situation is about to get quite rosy.

Bloomberg reports that upon leaving politics, Wisconsin’s first son will have no trouble adding to a current net worth estimated at slightly more than $6 million, given the wide range of corporate boards probably already banging down his door. “The kind of board that he would go after would probably pay between $250,000 and $300,000 a year and he could probably get three or four of them,” Fred Foulkes, a professor at Boston University’s Questrom School of Business, told Bloomberg. “There would be dozens that would like to have him, particularly companies that have part of their business in key relationships with certain parts of government.” While Ryan will have to abide by a rule that says representatives must wait one year between working on Capitol Hill and lobbying work, there are no such rules about joining companies’ boards. One imagines that plenty of the Speaker‘s corporate donors, now saving millions on their tax bills, would be happy to have him.

There’s some irony in the fact that Ryan, who famously called poverty a “culture problem” of “men not even thinking about working,” who said the social safety net is a “hammock that lulls able-bodied people into complacency and dependence,” and who extolled the virtues of children seeing their father working, will be quitting his job at 48 in order to do less work for more money. Corporate board seats are famously cushy gigs that involve, typically, attending a meeting every few weeks, max. By the Boston Globe’s estimates, board members usually work fewer than five hours per week per board. The positions are so lucrative and coveted that critics say some people are discouraged from raising questions about C.E.O. pay or other issues for fear of losing their seats, which we’re sure will never been an issue for the deeply principled Ryan.

While Ryan spent much of his career railing against benefits for public-sector employees, he’ll also enjoy a hefty pension package when he heads back to Janesville—a golden parachute that will be further inflated if Ryan hangs on until the end of the year, as he has said he will do…

When it came out that Trump pressured Comey to drop the Flynn investigation and then fired him when he didn’t, @PRyan excused it all saying “he’s new at this.”

Now @chucktodd asks him whether Comey is honorable, Ryan refuses to answer even on way out. He’s corrupted to the core.

But Ryan’s still got one last dream: