You are here: Home / Politics / America / The Lone Gunman Comes To Town 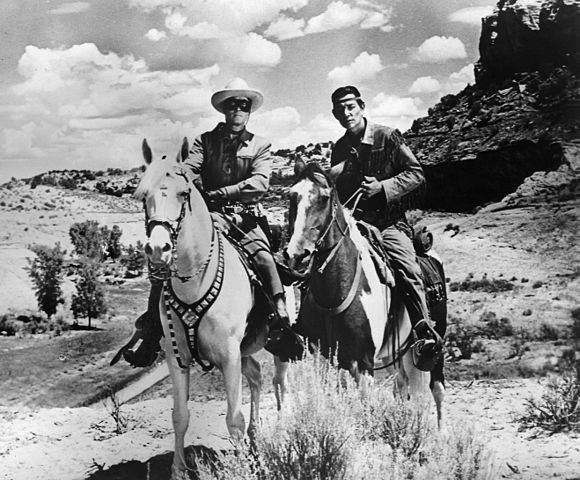 Hundreds of films and television series were produced in the middle of the twentieth century on the theme of the lone gunman saving a town. An isolated frontier town is in trouble, usually from marauders who are stealing cattle and menacing women and children. A rugged, handsome hero rides in and saves the town.

The variations are endless. The troublemakers may be from the town or from outside. They are often nonwhite and the town primarily white, with a few people of color scattered in. The leadership of the town, usually white men, are ineffective or injured. The hero is white and may, as in the case of the Lone Ranger, have a nonwhite sidekick. He may become romantically involved with one of the women of the town, but he seldom stays. The narrative is gendered and racialized.

Such plots were particularly popular through the 1950s. The 1960s brought a degree of revisionism and a darker cast to the plots as contemporary society changed.

The time of the lone gunman was the time of the formative years of many of the men in the Trump administration, and Donald Trump himself. Every week The Lone Ranger saved another town and rode off into the sunset, accompanied by his faithful scout Tonto. The ads showed the Marlboro Man, alone and smoking.

Trump used this narrative to sell himself. Things were terrible in the United States – crime was rampant, other countries had stolen our jobs and were laughing at us, coal was dying. But “I alone can fix it!” Trump’s description of the United States was a lie, of course, but it was necessary to set up the lone gunman narrative.

Trump has tried his best to remain that lone gunman. He has gutted the State Department and left other agencies short-staffed because “I’m the only one that matters.” Quite a few women are not playing their proper roles of admiration, with Melania giving a lot of side eye, Ivanka having more or less vanished, and sex workers uncovering his past. The sex workers in particular were supposed to have hearts of gold. Women at his campaign-like rallies still shout their joy at having him in town, however.

The Mexicans are not tossing their blankets over their shoulders as they stand up and saying “Si, senor” to Trump’s desire to build the wall to keep them in their part of town. And there are guys with stars on their lapels who aren’t cooperating either.

Rex Tillerson is one of the many old white men in the Trump administration who seem to be playing the lone gunman in their minds. Here is how Ronan Farrow describes him:

In that meeting, in January, Tillerson was wearing a charcoal suit and a canary-yellow tie, patterned with horseshoes. He was sitting, legs crossed, in one of the blue-and-gold upholstered chairs in the Secretary’s office. Tillerson had redecorated, replacing the portraits of dead diplomats with scenes of the American West. He got compared to a cowboy a lot, and, between the décor and the horseshoes, he appeared to be leaning into it. The name helped: Rex Wayne Tillerson, after Rex Allen and John Wayne, the actors behind some of Hollywood’s most indelible swaggering cowboys.

We can add his Texas accent to that.

Partaking of the narrative are Steve Bannon, whose trusty steed is ideology; Ben Carson, a famous doctor who rides into town to make people’s lives better; Scott Pruitt, whose extreme effectiveness makes him a target of bad guys everywhere. James Comey, too, sees himself as the lawman armed with integrity and righteousness and destined to save this town.

The fantasy is related to the belief that “only a good guy with a gun can stop a bad guy with a gun.” This is no more true that Trump’s view of a badly damaged United States, but it helps some men to feel that they have retained a role of protector of women and society, the lone gunman. This weekend, that fantasy was upended once again, when an unarmed man stopped a gunman in Tennessee.

Many voters want to believe Trump’s narrative of himself as the lone gunman who will fix Washington. Narratives like this, embedded since childhood, are powerful and Trump knows how to use them to build his support. But they are of little use for making the things happen that constitute governing.