I have nothing to say but I just wanted to share this picture of Sam, who just looks amazing with her summer cut: 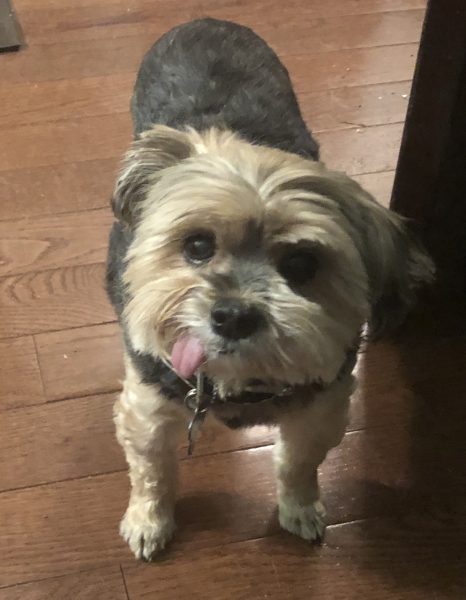 She’s a morkie, but she thinks she is a rottweiler. Her tongue is hanging out because if you remember, she had some horrible disease with her teeth so she had every single one pulled, and now her tongue just flops around, but I think it just makes her cuter. She’s pretty awesome.

END_OF_DOCUMENT_TOKEN_TO_BE_REPLACED

… because his Lord & Master Donald J. Trump has done everything short of calling a press conference to witness him taking a dump on Jeff’s desk, and yet the Malevolent Leprechaun still won’t walk away from a criminal conspiracy that at best is going to soil his reputation for all time.

…The New York Times this week reported on one of these conversations— which occurred at Mar-a-Lago in March 2017 — and said Robert Mueller is investigating it. But Trump’s other direct conversations with Sessions about the subject have not been previously reported.

A source with knowledge of the conversations said they occurred throughout last year, until fairly late in the year — not just in the short period after Sessions recused himself last March…

Trump told Sessions he’d be a “hero” to conservatives if he did the “right thing” and took back control over the Russia investigation, according to two sources with knowledge of their conversations.

Trump also told Sessions he’d be a hero if he investigated Hillary Clinton, according to one of the sources…

3/ Later we learned that Trump said he wanted an Attorney General who would "protect" him, as he believed Eric Holder did for Obama. We then learned that Trump ordered his White House Counsel to try to stop Sessions from recusing himself: https://t.co/FHCnY6EOf5

END_OF_DOCUMENT_TOKEN_TO_BE_REPLACED

You can’t make this stuff up!

News4 Jacksonville has the details!

An anonymous call to the St. Augustine police Saturday morning led to the arrest of two people on drug possession.

Police say they responded to a parking lot on South Dixie Highway and found three people sitting in a car. The people in the car consented to a search and police say they found drug paraphernalia and a substance that field tested positive for crystal meth.

Yes you read that right. Crystal Methvin has been arrested for possession of crystal meth. Apparently Barri Weiss was right. Who would’ve guessed? (Narrator: no one!)

And as a bonus we bring you a Floriduh! Man who went were no man should’ve gone (before or after).

Clearwater police were called to a bus stop on Gulf to Bay Boulevard around 11:20 a.m. Monday for a report of a lewd and lascivious act.

When officers asked what he was doing, the man told them, “I’m scratching myself.”

After the man was arrested for disorderly conduct, police asked him to identify himself.

The arrest report states the man told police his name was “James Tiberius Kirk,” the full name of the fictional character Captain Kirk from Star Trek.

Police say they later discovered the man’s real name is James Bundrick. The 56-year-old is now also facing a charge for providing a false name or identity to law enforcement.

Remember to not take your phaser out and wave it around in public if you know what I mean and I’m sure you do. It is, of course, only the logical thing to do.

END_OF_DOCUMENT_TOKEN_TO_BE_REPLACED

Tim Make has an amazing piece in NPR with a boatload of audio of Trump’s favorite legal goon, Michael Cohen. Lot of good stuff in there.

END_OF_DOCUMENT_TOKEN_TO_BE_REPLACED

I had to head down to the big city to pick up Tammy, who is coming up with Samantha to visit, hang with my parents, and mess around in the garden (we’re sharing it since she has no room at her place), and before I left, I checked on the birds. I couldn’t get a good picture, so I delicately picked up the fern by the bottom, and took this: 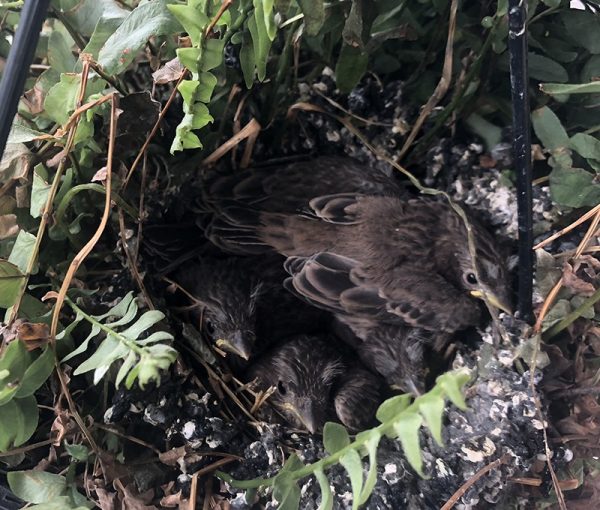 As I slowly placed it back on the hook, he flew off and landed on the wire right next to my house, and sat next to what I am assuming are his mom and dad. Four hours later, I came back to check on them again, and as I approached the fern, two more flew out, and this happened (Gerald’s wife and daughter are the other two you hear in the background asking what we are doing):

Not every nest of house finches gets a cheering section! I missed the exact moment #4 took off, but you can hear the wings ruffling:

There is now one little fellow/lady left in the nest: 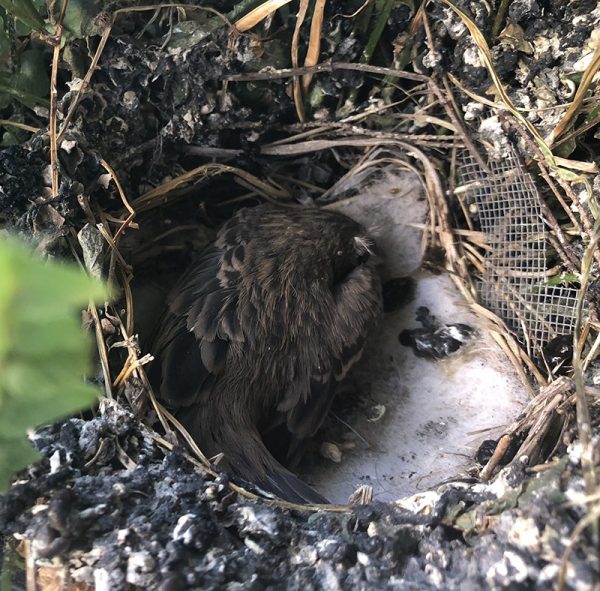 That’s a bad picture, but it is alive, breathing, and it’s eyes were open. I’m going to leave them alone for today- that was enough human interference, but I bet tomorrow the nest will be empty. I’m just going to pretend they hung around for me to see them take off for being such a good host and putting up the completely unnecessary Birdslide 9000x. When I came in side there were were birds on the wire and one hopping around on the ground, so I am hoping they stay around here and make this their HQ (is it obvious I have no idea what the habits of house finches are?).

I’m off to take a nap, this was too much excitement for one day.

END_OF_DOCUMENT_TOKEN_TO_BE_REPLACED

There are few more prominent political figures who are as virulently racist as Dinesh D’Souza and Joe Arpaio – and Trump has pardoned them both.

Will be giving a Full Pardon to Dinesh D’Souza today. He was treated very unfairly by our government!

In pardoning the well-documented criminality of folks like Dinesh D'Souza and Joe Arpaio, President Trump is sending a clear message: Personal loyalty to his administration will secure legal immunity.

It can't be overstated how subversive this is to a functioning democracy. https://t.co/oqxuei9pIa

KARMA IS A BITCH DEPT: @PreetBharara wanted to destroy a fellow Indian American to advance his career. Then he got fired & I got pardoned

Everyone in politics knows D'Souza is a bad faith actor, who makes deliberately provocative disgusting statements. What will be more interesting today will be to see which GOP politicians ignore that and give bold statements celebrating him.

END_OF_DOCUMENT_TOKEN_TO_BE_REPLACED

Then they came for Bill Maher, and I said, “Fuck that bigoted knob! I don’t give shit!”

Then they came for Samantha Bee, and I said, “Back the fuck off Sam Bee!”

I’m referring to the wingnut outrage du jour: Samantha Bee referred to Ivanka Trump as a “feckless cunt” on her show last night, and conservative snowflakes have moved on from demanding that Bill Maher be fired for saying Donald Trump’s mother mated with an orangutan to screaming for Bee’s head.

It may be working. The video has been pulled from Bee’s show’s YouTube channel just in the last few hours. An excerpt from a CNN story about the incident:

After Ivanka Trump posted a photo of her and her child amid resurfaced reports that undocumented children are being separated from their families when they are apprehended by immigration authorities, Bee referenced Barr’s recent tweet.

“Ivanka Trump, who works at the White House, chose to post the second most oblivious tweet we’ve seen this week,” Bee said. “You know, Ivanka, that’s a beautiful photo of you and your child, but let me just say, one mother to another, do something about your dad’s immigration practices, you feckless c***!”

“He listens to you,” she added. “Put on something tight and low-cut and tell your father to f***ing stop it. Tell him it was an Obama thing and see how it goes, OK?”

I try not to use the c-word. I’ve scolded people for using it here, and in certain contexts, i.e., a man using it as a gendered slur against a woman, it’s deeply offensive.

Also, while it’s dumb as fuck for conservative snowflakes to whine about private companies firing wingnut celebrities who are bad for business (e.g., Barr, Kevin Williamson, etc.), it’s deadly serious for government officials to demand the firing of people whose speech offends those government officials, as Donald Trump has done repeatedly regarding NFL players who take a knee and Sarah Huckabee Sanders did today in reference to Bee.

I would like to sincerely apologize to Ivanka Trump and to my viewers for using an expletive on my show to describe her last night. It was inappropriate and inexcusable. I crossed a line, and I deeply regret it.

Kinda wish she hadn’t, but let that be an end to it. We’ve got more important shit to focus on, like the outrageous immigration policies Bee was discussing that led to FecklessCuntGate in the first place. And the fact that Trump has paid no price so far for the massive death toll in the aftermath of Hurricane Maria in Puerto Rico, in which more people died than in Hurricane Katrina and 9/11 combined, thanks in part to the bungled response led by that feckless cocksplat Donald Trump.