You are here: Home / Politics / An Unexamined Scandal / The DOE Announces Plans For Pit Production 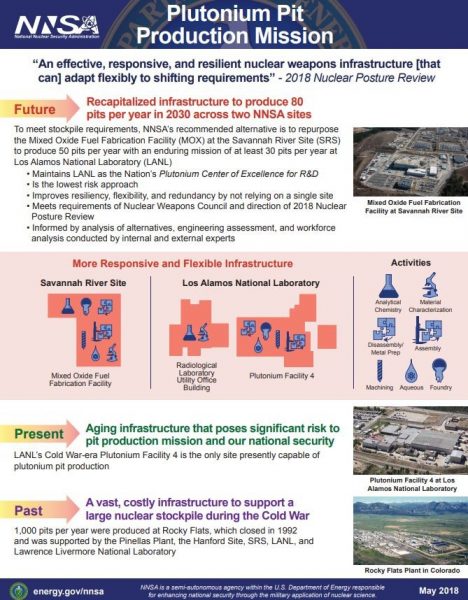 The Department of Energy has been contemplating the future production of nuclear weapon pits – the fissile part of the weapon, usually plutonium. Rocky Flats, between Golden and Boulder, Colorado, used to do it, but it turned into an environmental disaster. All buildings have been removed from the site.

Los Alamos and Savannah River are the only two DOE sites that can work with plutonium. Both put themselves into the running for the task. Both have had some problems with safely handling the stuff, for example. The decision was announced today. Both were, in effect, selected.

This is the kind of bad decision that the DOE has long made. It avoids the political problems that would come with selecting one site or the other. The congressional delegations of both states will be pleased. To be fair, there are people with expertise at these sites and facilities that can be used or upgraded.

And they will need to be upgraded. Whether the funds will be appropriated and whether they will turn out to be adequate when the plans are fully worked out is another question, one that has been answered very poorly by both the DOE and Congress in the past.

The evidence seems to be that pits last a longish time, perhaps up to a century. We have several thousand nuclear weapons, more than we are ever likely to need.

Carson Mark, a Los Alamos weapons physicist, once proposed that we simply let all the tritium, a radioactive component of thermonuclear weapons, decay and not replace it as a partial step toward disarmament. The way the US is going, it looks like something similar is happening with the capability to build nuclear weapons. Russia is keeping its capacity going and is not in a friendly mood to talk about just letting it all go. But I would love to see the US just say F***it, we’re done, and see how that plays.