Some of you may recall I have a roast chicken obsession.  Been a while since we’ve talked about my problem here, but now’s the time.

Yesterday I mashed together a couple of recipes to come up with this: 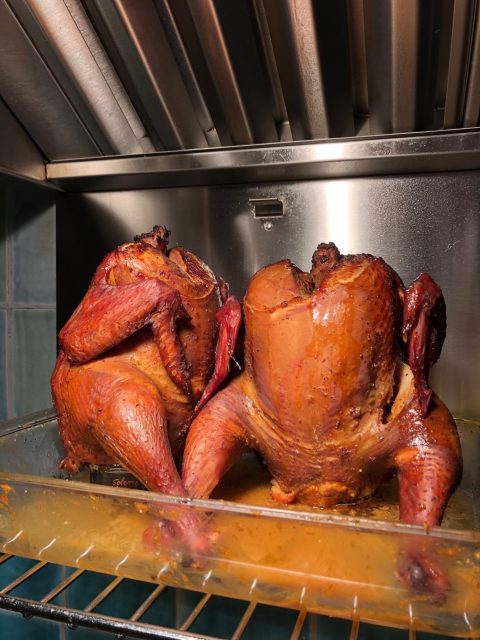 That would be Peruvian/beer can chicken, smoked on Weber grill.

The Peruvian stuff is here.  Doubled the marinade for the two chickens.  Spooned it all over under the skin; rubbed the left-overs on the outside.

Took two beer cans, drank half the contents of each,* and  proceeded as directed here: putting the half-empty cans in the cavity, and setting both chickens upright, using the legs to make a tripod. (Forgot this bit: I let the chickens rest (not vertically) for about three hours coming up to room temperature from the fridge before shoving the beer can up their butts and getting ready to sit them on the fire.)

Then: about a chimney full of good charcoal (lump hardwood), a few more chunks once I dumped the chimney out.  When the coals were red with just a grey rim, I tossed on two handfuls of soaked wood chips; made sure the whole smokey mass was to one side of the grill; placed the cooking grated and set the chickens on the cool side of the Weber with their backs to the coals.

Next, I covered the Weber, with the air holes in the lid almost completely open, and let ’em go.  I checked them first at about 15 minutes, and again ten minutes later, when I shut the air vent down a little — maybe to two-thirds open — in a probably feckless gesture at getting a little more smoke.  About ten minutes after that, they were done — in the state you see in the photo above.

I also made the cilantro-feta green sauce from the first link, which I can’t recommend too highly; it’s kind of like a creamy chimichurri.  The other minor note: it’s worth picking up the Peruvian chile pastes.  I tried doing this with substitutes and it just doesn’t come out with the same pop.

In any event, when we got the chicken to the table it was, by general consensus, simply the best chicken we’d ever had.  The Peruvian flavor was present, but not overwhelming; ditto the smoke.  The thigh meat was perfect and yet the breast was not overdone.  It was as moist as any bird I’ve ever had — I’m guessing the combination of the vertical cooking position and the moisture from the beer does some kind of magic.

In the midst of the holy hell that is daily life, I have to say it was a pure pleasure to try something new (to me) and have it come out just right, better than imagined.

(We were cooking for very good friends, and the rest of the meal was not shabby either.  I’ll save the salmon bacon post for later.)

Anyway, the thread is open, but I’d like to know if any of y’all want to share any of your similar experiences:  something you cooked or ate that gave you inordinate pleasure.

*Of the two, the Snaggle Tooth Bandana IPA was really nice.