You are here: Home / Anderson On Health Insurance / Deductibles and distribution

The Kaiser Family Foundation and the Peterson Center on Healthcare tracks cost sharing and premiums for employer sponsored insurance (ESI).   I am using their Table 1 data to look at the distributional consequences of benefit design changes. 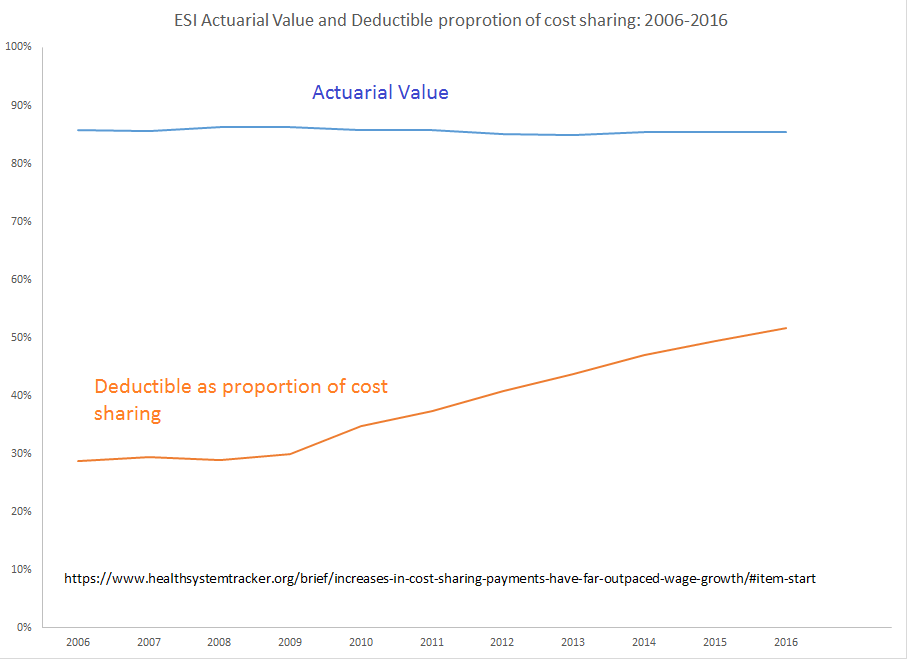 The blue line is the actuarial value.  It has hovered at about 85% over the decade of data.  Insurers pay roughly 85% of the incurred claims.  15% of the claims are paid by individuals through cost sharing.  The implied challenge is that medical costs are growing significantly faster than wages so total spending (both premiums and cost sharing) are going up quickly for people.

Under a deductible heavy scheme, I am kicking in $150 to the cost sharing pool.  My friend is maxing out her deductible in the first month of treatment.  If urgent care has a $50 co-pay and generic drugs are no cost-sharing, I kick in $50 instead of the $150.  That other $100 has to be made up somewhere and that means it will be made up from people with frequent interactions with the healthcare system which means it will increase cost sharing for very sick individuals.

I wonder if part of the political anger and angst on healthcare is the transition from a cost sharing regime that is heavy on co-pays and light on deductibles to the opposite.  The original baseline is pretty good for the bottom 50% to 60% of the healthcare spending distribution.  Their out of pocket costs were fairly low the few times that they touched the system in a year.  A $20 or $40 charge was what they saw.  Now, under a deductible heavy, co-pay light system, they are seeing their cost sharing increase significantly so they don’t see the value of their health insurance when they pay $144 for the urgent care visit.  Holding actuarial value constant, it is a change in regimes that is good for very expensive individuals but those are the folks who are not high in number nor particularly price sensitive as their treatment choices are pay or die.