Back in March, Vladimir Putin unveiled a number of new nuclear weapons. But they’re not operational, and, in my opinion, are unlikely ever to be.

One was the Poiseidon (Status-6) underwater drone, supposedly designed to hit the east coast of the United States with a radioactive tsunami. Oh, and did I say that it’s undetectable?

Another was a cruise missile powered by a nuclear reactor.

Except for the first few seconds, the videos are animations. This does not suggest a high degree of development.

CNBC reported this week that the Russian military is searching for a missile that crashed on a test flight. There seem to have been tests of something that could be the nuclear cruise missile in Novaya Zemlya, the far-north island chain used by the Soviets for testing nuclear weapons. Jeffrey Lewis’s group at the Middlebury Institute found possible evidence of a test in May and feel that they know the location now. News reports source intelligence community reports that there have been twelve test flights, of which one flight lasted for two minutes and 22 miles. That seems to be the test vehicle that the Russians are looking for.

It is hard to believe that the Russians are testing a full-up nuclear cruise missile. It is easier to believe the Vladimir Putin is trolling the United States, or, more seriously, trying to provide an incentive for the United States to return to talks on arms control, particularly the renewal of the New START Treaty, which expires in 2021. Treaties take some time to negotiate, and the two countries have issues they want dealt with.

Putin may well be attempting retribution for Ronald Reagan’s trolling of the 1980s. Reagan was elected president in 1980. Leonid Brezhnev was General Secretary of the Communist Party through 1984, followed by Yuriy Andropov for 18 months and then Konstantin Chernenko for a year, and Mikhail Gorbachev in 1985. The Soviet economy was weak.

Reagan was convinced of the idea of a missile shield for the United States, largely by Edward Teller of the Livermore National Laboratory. It would protect America from missiles via a network of satellites with new and amazing capabilities – x-ray lasers, brilliant pebbles, rods from God, and more! They never passed the animation stage.

Missile defense (also dubbed Star Wars for a recent movie) scared the Russians, as did the intermediate-range Pershing II missiles that the United States installed in Europe. A commonplace belief, which is not accurate but may be shared by Putin, is that the Soviet Union damaged itself by trying to meet the American threats, many of which were imaginary.

Given our general confusion these days and our continuing inability to produce essential nuclear weapons components, it would be a good time to introduce some new weapons as fictional as that Star Wars missile shield. LOL, stealth radioactive tsunami! Nuclear cruise missiles flying around the globe, mofos!

There is a lot we don’t know about this missile. I am particularly interested in the reactor. Reactors are heavy, and things that fly must be light. A reactor needs a critical mass of fissile material, in this case most likely highly-enriched uranium-235, as was used in the Rover space propulsion reactors. The size of that critical mass depends on the design of the reactor. Materials like reflectors and moderators make a difference in critical mass, but they also add weight.

The Russian nuclear cruise missile has been compared to the American Project Pluto of the late 1950s and early 1960s. Project Pluto was intended to develop a nuclear-powered ramjet cruise missile. Its reactor was called Tory, and it may have been a predecessor to the Rover reactors. (See slide 9 in this NASA presentation.) Little seems to be available on it online. At that time, much work on reactors was still classified. Also, from having been a technical writer in the Los Alamos civilian reactor division, I know that far too much was never written up.

The Rover reactors were intended to provide propulsion for space flight outside the atmosphere. Their structural elements were graphite, and the propulsion gas was hydrogen. The nuclear reactions were controlled by control rods. The operating temperatures were very high, and development required solving many materials problems. Overall, the reactors were perhaps six feet in diameter and somewhat taller than a human. (Graphic source – LANL)

The Tory reactors were of a similar size – less than ten feet in length and diameter. For tests, however, they required much more equipment to simulate a ramjet engine. Their fuel was enriched (probably 90% or higher) uranium and beryllium, “cast into cigarette-sized hollow rods of porcelain.” The second test reactor used over 460,000 fuel elements, presumably counting each cigarette-sized rod as a fuel element. For the full-power test, air had to be preheated to 1350 F by oil-based heaters. I can’t find a weight for the Tory or Rover reactors, but my guess is around a ton for the core. Here is a photo of the test setup. Note that it is on a railroad car. 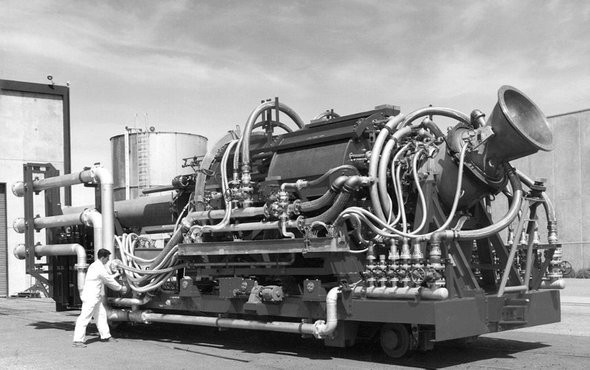 The Project Pluto cruise missile would be launched with chemical rockets until its velocity was sufficient to provide the air velocity the nuclear ramjet required.

The core diameter of the Russian missile reactor is said to be less than half a meter. The dimensions of the Rover reactors are of the entire operating system; the cores were approximately a meter in diameter. A Tomahawk cruise missile is almost 21 feet long, 21 inches in diameter, and weighs a little over a ton and a half – 3,330 pounds. This is significantly smaller than a nuclear cruise missile would have to be, even with that very slim reactor core.

It’s likely that whatever the Russians were test flying was less than a full-up nuclear cruise missile. Ground tests of the reactor would have come first, and they likely would have emitted radionuclides that would have been detected. Testing the weighted airframe with chemical propulsion would be prudent. So would static tests of the changeover from chemical to nuclear propulsion. The Pluto and Rover reactors operated close to the limits of their materials, and a smaller engine would have to operate even hotter to provide equivalent thrust. All that could best be tested in static setups. Those would be harder to detect than flight tests.

Why do the Russians want to recover the crashed test vehicle, and why now? They have shown little concern for environmental issues around Novaya Zemlya in the past. Did the test missile include a reactor? Recovering and disassembling the missile could give information about what may have gone right and wrong in the test flight.

The Russians conducted an environmental survey in the area for radiation in June. The Twitter thread linked there also documents ships in the area. A bit more speculation about the search can be found here.

Is this an elaborate troll? My guess is that Putin has some wild-eyed Star Wars type folk of his own working on Russian weapons, and they’ve convinced him it’s worth a try. If it works, Russia has more leverage. If not, well, animation has gotten American attention so far. One way or another, it probably would be a good idea to move toward talks on renewing the New START Treaty.

Update (August 25, 2018): Norway is concerned about the tests, because if what is being tested is anything like the Rover or Tory reactors, it’s likely to spew radionuclides as it flies, and who knows what might have happened if it was immersed in water. Russia should come clean about what it’s doing, although that is probably highly classified.

This Russian publication speculates on what the reactor might be. For the temperatures required for a ramjet, none of the options involving water moderation would be useful. I’ve only read it via machine translation, so I won’t try to deal with details.