Have a wonderful day – prepare yourself, for today is truly amazeballs! Sometime I’ll post about the grand meteor, eclipse, and space station experiences I had while living in Colorado. But enough about me, it’s Wednesday…

Lots of submissions are coming in, hurrah, but do keep submitting.

Troubleshooting  We have an improved setup and plans for further development. I hope the new setup works as well for you as it has in testing, but should you have issues, please email [email protected] This new submission tool is one of many more we’ve got planned, and your feedback helps us craft them to your needs.

The starman has been out and about, seeking out the darkest places in Southern California. The Perseids(meteor shower) occurred in early August and peaked on August 13th. They’re caused by a cloud of dust left by comet Swift-Tuttle that the Earth passes though late July and early August each year. So what better opportunity to capture the Milky Way and a meteor in the same shot. I shot at some familiar places(Lockwood Valley and Arroyo Hondo) and a new and very dark place(Amboy Crater).

While I was shooting the Milky Way to the south, I set up my NX500(which is currently vacationing with my step-daughter in Australia) to capture the sky to the north with a series of 30 second exposures. Thirty seconds will produce tiny star trails and a series of these tiny stars with trails stacked together in Photoshop will produce long star trails(the pain is removing airplanes from the individual shots they show up in). 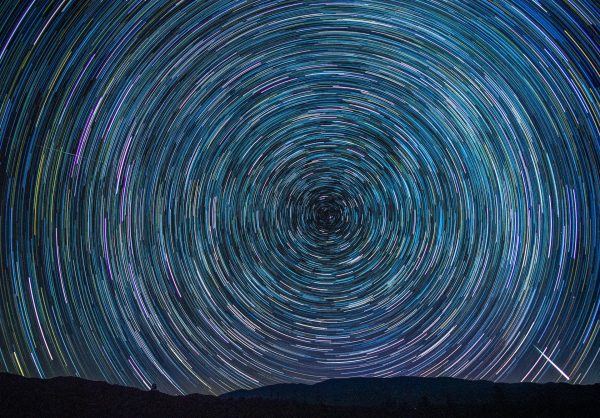 I really enjoy this location in the southern edge of Lockwood Valley, it’s got a simple but attractive foreground with the trees and mountains and it still affords a nice view of the Milky Way. I got up there while the moon was still out and that produced enough light for some nice foreground shots. This shot is actually a panorama of the Milky Way since I was using the 16mm lens on my NX1, shooting the bottom portion of the galactic center first and the moved the camera up to shoot the upper portion. These photos were not taken with the skytracker nor were they stacked(combining multiple exposures of the same scene to reduce noise and increase clarity). 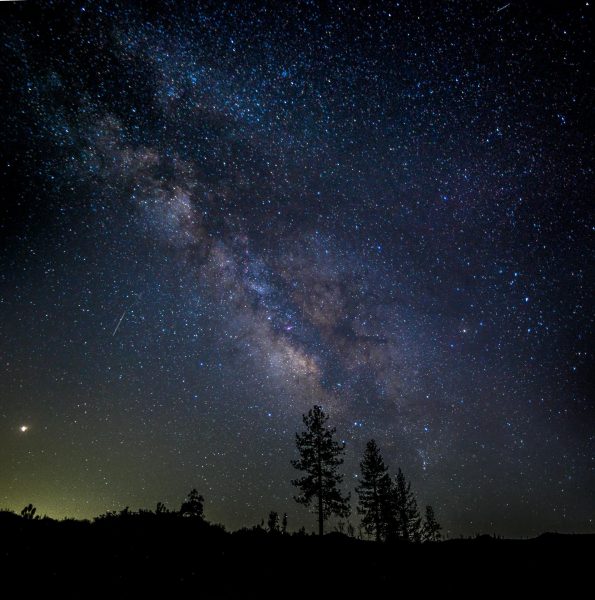 The guy who organizes the Glendale Photo Group meetups asked if I’d take him to where I’d been shooting up near Santa Barbara and I agreed to meet him up there to shoot. I was shooting with the skytracker, but was having problems when I was shooting in portrait orientation. So instead of using the skytracker I decided to try shooting for stacking. This means that I’d shoot multiple shots at the normal exposure(to avoid star trails) and then stack them together. As the camera was shooting the second shot, I saw a bright meteor shoot right next to the Milky Way. The skytracker can obscure meteors, so it was a good thing that I was having issues with it. 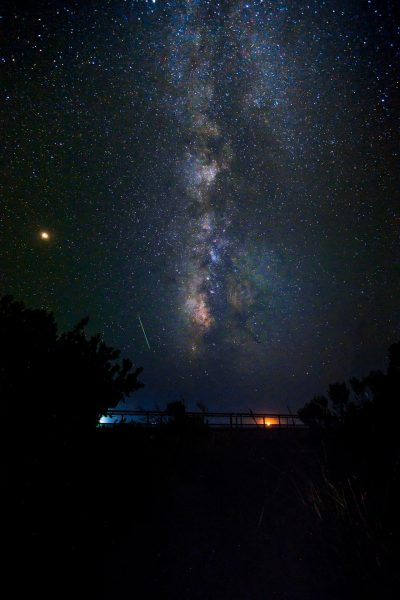 Madame wanted to see the meteor shower too, I don’t think she’d actually ever seen one(just hearing other folk say, hey there’s one). So we packed up the Prius with food, beverages(she had a couple of beers and Diet Coke for me) and the dogs and headed out to the desert. We’d never taken the girls out for a long car ride, and this was about a 3 hour drive, each way. Amboy Crater is about 80 miles southeast of Barstow on Route 66 and is an extinct volcanic crater. It’s really dark out there and I thought the crater would provide a nice foreground. Unfortunately, by the time we arrived the galactic center was already starting to set, but I still managed to get a good shot. The little bit of light pollution from 29 Palms(about 30 miles away) and Palm Springs(about 60 miles away) outlined the crater nicely. 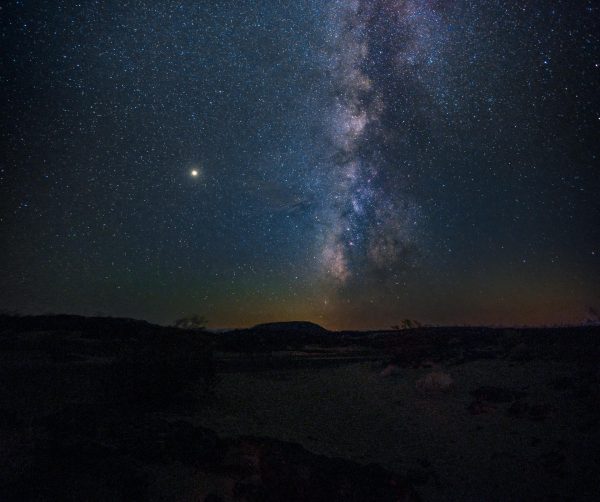 While I was shooting the Milky Way to the south, I set up my NX500 with the fisheye to shoot a series of shots to capture the meteors to the north. In this shot you can see at least two meteors(there might be a third, but I’m not sure if it’s a meteor or a distant plane). You can see the tiny town of Amboy* on the right and just left of center you may notice the light pollution from Las Vegas. Since I did shoot a series of shot, I will at some point produce a star trail as well. 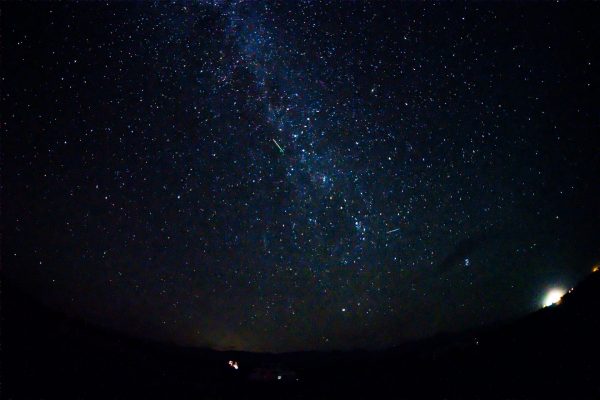