This May I had the chance to attend the first World Congress on Migration, Ethnicity, Race and Health in Edinburgh. We decided to spend a week in the Highlands since it was our first trip to Scotland, and likely timed to avoid both midges and many of our fellow tourists. We were fortunate indeed–great cool weather, perfect for walking, and barely any rain.

To see the Glenfinnan Viaduct, a small hike from the valley floor is required–but what a view. The trail doesn’t get you quite as close to the trestle as Mr. Weasley’s Flying Ford Anglia does in the second Harry Potter movie, but it’s still pretty spectacular. This bridge is used for an overpriced HP Jacobite train and a regular old West Highland line train; either provide the same route. 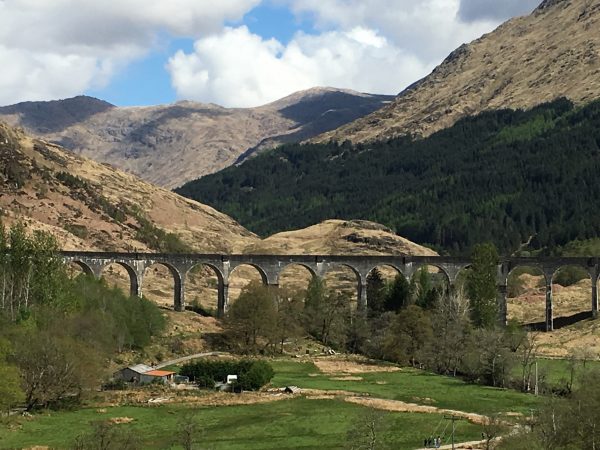 Now that we’ve viewed the famous train trestle, turn around for a quick peak since we’re up quite high, and …oh my word, what a view. We’re looking down at Loch Shiel, which stretches out before us for 17 miles or so. That tower at the bottom is the Glenfinnan monument to those who died in the Jacobite uprising; this is the spot where Bonnie Prince Charlie waited in 1745 to see who would join the uprising. Not a bad place to camp out. 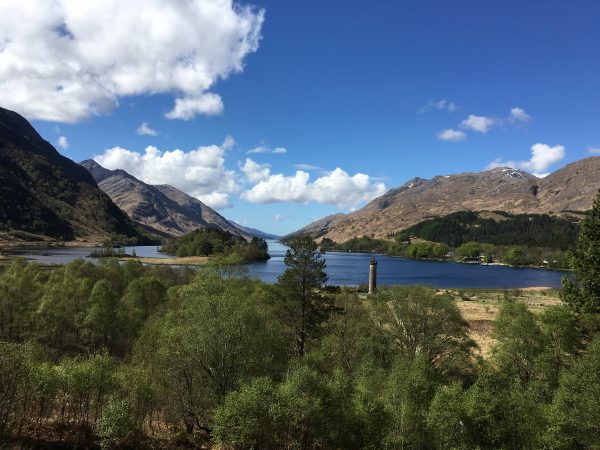 Previously, another Jackal who went through these parts and Edinburgh shared a photo of the Commando Memorial sculpture itself, so I thought I’d take us behind and below the highway to a trail that runs between the Memorial parking lot and Spean Bridge, about 2 miles away. This short hike is long on views, and goes through the training grounds the British Commandos used upon arrival in the Highlands. 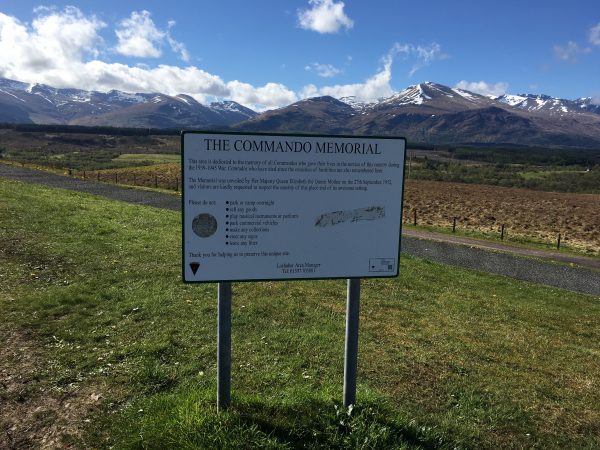 Along the trail between the Commando Memorial and Spean Bridge, people and dogs are welcome, but sheep are the primary inhabitants of the highlands. Ungulates abound. We were there during lambing season, and there were adorable babies everywhere, snagging their snowy white wool on yellow flowering gorse. This group’s babies are keeping their distance behind the mamas, alas, but the moms are pretty cute. 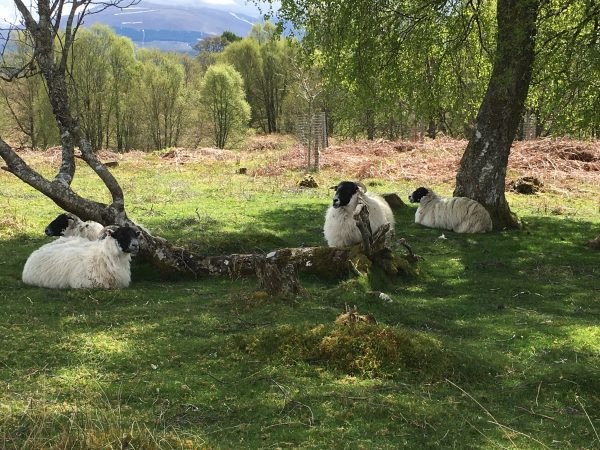 More fabulous scenery along the short hike from the Commando Memorial to Spean Bridge. Here, the edge of the Grampian Mountains is visible on a perfect Spring day. Looks like the beaches at Arasaig will have to wait for another submission! 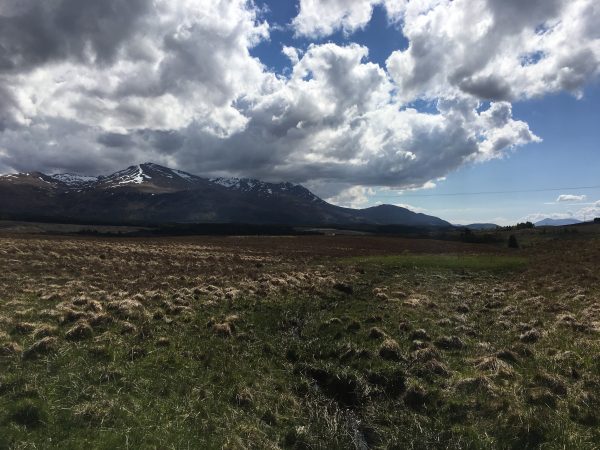 I’m not sure why it was surprising to me to find incredible beaches in the Highlands, because they are part of an island nation. Somehow all of the kilts, hairy coos and bagpipes didn’t make room in my imagination for the coastline and ocean critters. In case you’re in the same boat–so to speak–let me introduce you to some amazing Scottish beaches! Next time I go, I plan to include time on some islands to get more of this into the trip.

This one is a bit hard to find, but a fairly short drive from Arisaig IF you don’t miss the turnoff (we did, twice, and messed up a tire turning around in the process). Still worth it! White sands, and a view of Lewis & Harris way out there. While there weren’t many seabirds that day, and we didn’t catch any dolphins on the horizon, the beach was lovely and great for shells. The water was a bit cool for swimming, but we did see a few intrepid boogie boarders out in the surf. 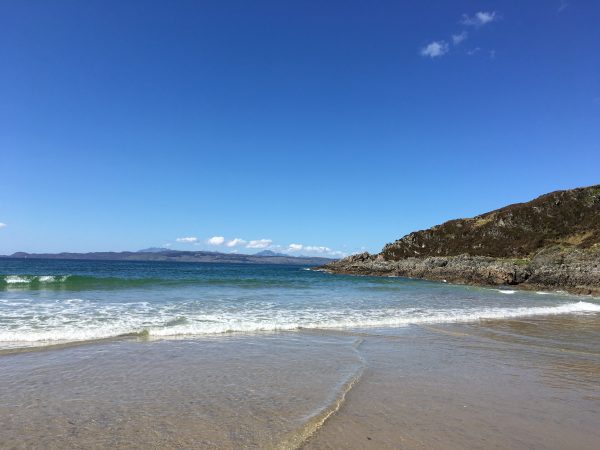 On the northwestern edge of Skye lies Dunvegan castle, home of Clan McLeod, nicely situated on…wait for it….Loch Dunvegan. This Loch is really a bay, so I’m not quite clear about the nomenclature–but one of many cool things a castle visitor can do is to get on a guided boat tour into the bay to visit a colony of seals. So many colors and personalities on display! Some seals headed into the bay to play and show off, others ignored us completely, and one or two pointedly turned their backs on the boat. Lots of great seabirds to gawk at as well on this short excursion. 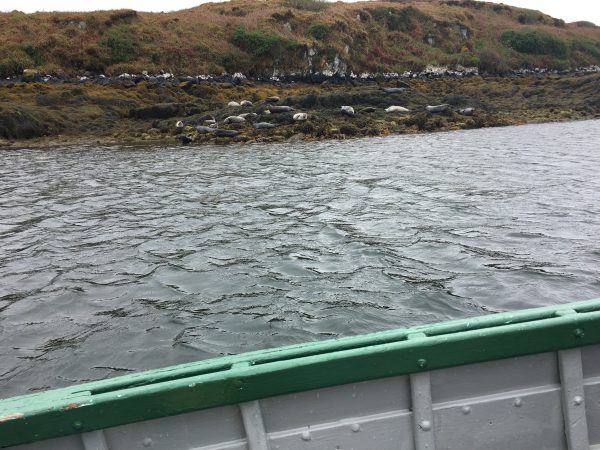 If you have a car, you can drive to this lovely spot in about 1.75 hours from the Glenfinnan Viaduct. I’m actually walking in the shallow water to take this photo, having left the lovely little tidepools on the white sand beach itself behind me. Beaches in Scotland in mid-May seem to be nearly deserted; we had them nearly to ourselves. This one is located just outside the community of Arisaig, on the western coast. Arisaig was the base of training for special operatives heading to occupied Europe in WWII. While there is a recent monument there to Czech and Slovak soldiers, we ran across surprisingly little else to commemorate its important history.

Note to Alain: I’ve spelled the place correctly here but not in the intro, drat it all. Hoping you are willing to serve as the edit button! ;). 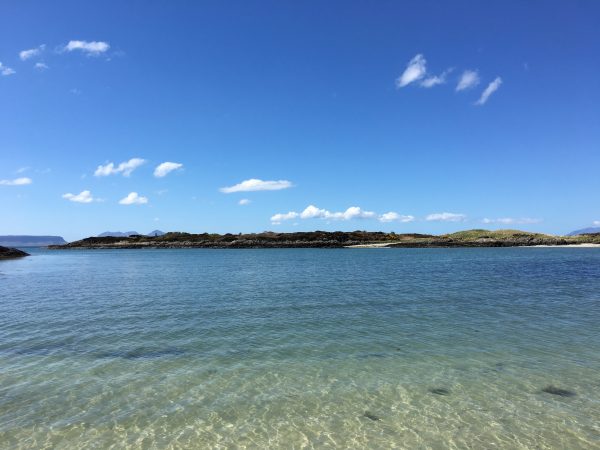 By far the most adventurous beach quest was getting to Talisker Bay Beach, up above the famous distillery, along a single-track road that is in decidedly poor condition. Passing places were few, one or two hairpin turns had to be negotiated, and maximum speed at times was 5 mph to avoid having the rental car swallowed by potholes. At times the place seemed mythical, and that we would never arrive. Finally–after a reassuring short conversation with folks in a car coming back from the beach– we found the place where other cars had parked. Using the UK’s right-of-way laws, we proceeded for another mile on foot through what has to be the world’s loveliest sheep pasture towards the bay. There’s even a waterfall. 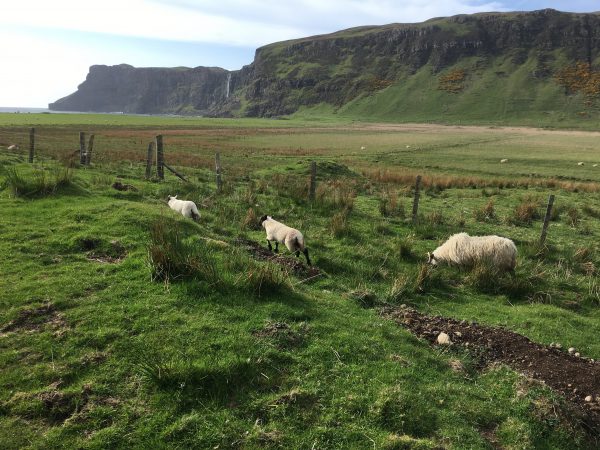 Talisker Bay Beach on the west coast of Skye is a beautiful big horseshoe shape, surrounded by dramatic cliffs. After the single track road and the long-ish walk, there’s another scramble down a bunch of weathered but very uneven softball-to-boulder sized rocks, to finally arrive at the black sand beach. But it’s worth it, even entrancing a young person often fascinated more by phones and makeup than nature. When we arrived, there was a score of professional-looking photographers with tripods and fancy gear bags getting ready to capture the magic moment when the sun hit the horizon line off the west coast. We played in the sand, but mostly just walked along and took it all in, leaving before sunset so we didn’t have to drive in the dark. We brought with us a small baggie of black and silver sand that caused a stir in the Newark airport a week or so later when it went through the xray, but that evening we were all happy we’d stayed the course and made it to what felt like the ends of the earth. Which, of course, it was, except for the Outer Hebrides. 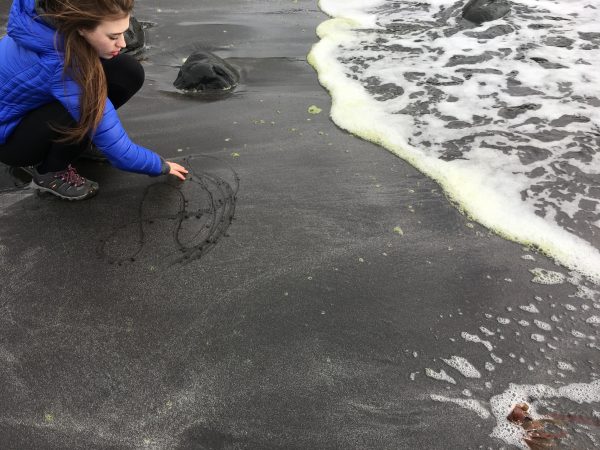 Thank you so much Argiope, do send us more when you can.

Scotland is one of those places in the “I can move there” column, for so many reasons.