You are here: Home / Past Elections / 2020 Elections / Never Let Your Opponent Set The Terms Of Debate

Last night, I told a friend that Elizabeth Warren’s DNA test was a strategic mistake. I haven’t wanted to say much about it, because I didn’t want to add fuel to the fire. But Democrats and others opposing Donald Trump have to get strategically smarter.

Apparently the lie about Warren’s using Native American heritage started in an earlier race. But Trump added the “Pocahontas” part, an obvious racial slur. He also added a challenge that he would pay $1 million dollars to a charity of Warren’s choice if she would take a DNA test.

Probably the way Warren’s people thought about this was: Take the DNA test, demand the $1 million, show Trump to be a piker. 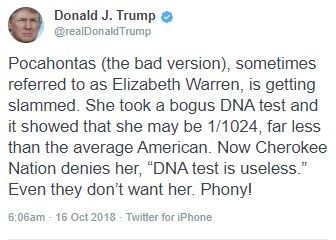 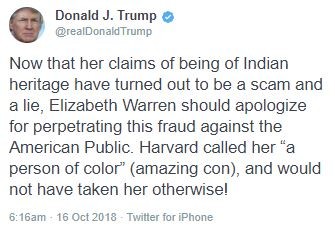 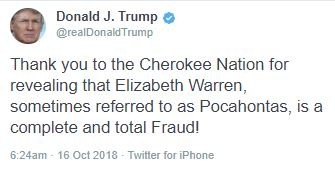 History shows that Trump is a piker. The $1 million challenge gives him an opportunity to continue the smear. And there was no way he would stop the “Pocahontas” thing in response to a DNA test. Negative commentary from Native Americans gave him more ammunition. All that was predictable.

Trump gets some things right, and his idea of hitting back hard is one of them. Warren should have, the first time Trump said “Pocahontas,” hit back hard by calling that for what it was.  RACISM. Say that her heritage, like everyone else’s, has nothing to do with her eligibility for office. Give the story of Pocahontas and show how the wrongs against her are perpetrated by Trump’s bigotry.

I don’t want to make a big thing out of this – we have more important points to make as we move toward the election. But please, please, Democrats get smart about this.