You are here: Home / Civil Rights / Women's Rights / The War On Women / Why They Thought It Would Work

I wrote about this on the twitter machine, which usually is just where I post crap and tell toadie journalists and nazis to go fuck themselves, but I think this is worth repeating. A refresher on what the dipshits Wohl and Burkman tried to do:

The office of the special counsel, Robert S. Mueller III, has asked the F.B.I. to investigate what appears to be an effort to smear him, stemming from suspicious emails offering women money in exchange for fabricating sexual misconduct claims against him.

“When we learned last week of allegations that women were offered money to make false claims about the special counsel, we immediately referred the matter to the F.B.I. for investigation,” Peter Carr, a spokesman for the special counsel’s office, said in a statement on Tuesday.

The plot appeared to be the latest, and one of the more bizarre, in a string of attempts by supporters of President Trump to discredit Mr. Mueller’s investigation as a hoax and a witch hunt. Mr. Mueller is investigating whether any Trump associates conspired with Russia’s 2016 election interference and whether the president tried to obstruct the inquiry. He has secured six guilty pleas and a trial conviction in the 17 months he has overseen the investigation.

That’s the gist of it- they were conspiring to find women and pay them/bribe them to come forward with phony allegations of sexual misconduct. It’s idiotic and offensive, but it is also a very, very serious thing. Just this conspiracy alone is probably (remember, IANAL- I am not a lawyer) a felony for obstruction of justice, as they were doing this to bring down Mueller and obstruct his current investigation. It will, in all likelihood, cascade into a series of other tertiary felonies, as this dipshit brigade will probably lie to the FBI when questioned (felony), attempt to get everyone to tell the same story and coax witnesses (another felony), attempt to destroy evidence and smash hard drives and erase emails (felony), and so forth. Again, IANAL, but it sure feels like this is the road we are going to travel.

The details of our stupidest venture into dirty tricks are also humorous and staggering in their incompetence, as any investigation into Surefire Intelligence, the vehicle for this “scheme” (no disrespect to actual schemes intended), is sure to bring the yuks:

The “intelligence firm” that prepared the allegation, SureFire Intelligence, was linked to Wohl due to DNS registration records saved on CuteStat.com. These records show that someone using the email [email protected] was involved with the domain registration for surefireintelligence.com.

When searching for the various employees who list their employment as SureFire Intelligence, nearly all of them use stolen profile photographs. In particular, many of these photographs use the sepia-toned filter that was likely used to disrupt reverse image search algorithms. 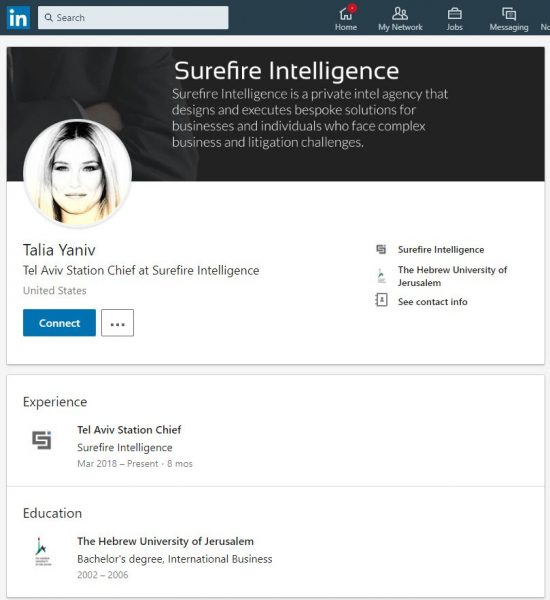 It goes downhill from there.

But to me, the most depressing aspect of this whole thing (now that I have sufficiently buried the lede for this post) is WHY they thought it would work.

They thought that they could easily find women to come forward, accept money, and lie about sexual misconduct on the part of Mueller because THEY DON’T BELIEVE WOMEN WHO HAVE BEEN VICTIMIZED. They think it is all made up. They don’t believe women are sexually harassed, they don’t think they are assaulted and raped, they think everyone coming forward is doing it because they have ulterior motives, whether it be fame, fortune, or in Dr. Ford’s case, they love abortion so much that they just had to stop Kavanaugh.

And the reason it never occurs to them is because to them, women are not people. They are objects- servants when needed, playtoys for sexual release or gratification, impediments in the workplace when it comes to promotion, things to look at, things to help them feel better about themselves, and in this case, tools to achieve a political ends.

And that’s the most depressing thing about this scandal.