Folks, today is the day. Vote like your future depends on it. More importantly, let folks 12-40 who did vote know that, come what may, they were right to be engaged, concerned, and to have voted. Things are not normal and they are to be lauded for having stepped up.

The way I see it: if today doesn’t deliver a brake to the Trump Regime, great horror awaits us all before the fever is broken.

We’ll be here tomorrow, no matter the result, with some wonderful pictures. Hopefully we’ll be celebrating.

But today is an overdue promise – pictures from Africa.

As someone who was born in Africa, it always pleases me to post pictures and stories from there. And “there” encompasses an immense area of multitudinous nations, groups, tribes, cultures, religions, great histories, and pockets of colonialism and their reverberations. I’ve been blessed to have visited a handful of countries from north to south, but mostly in the east. One of my mother’s unmet wishes was to see the great animals of Africa one more time, and I hope to travel there in the next few years in her stead.

I can’t wait to go back there – in my experience, there is a certain African way of relating to your fellow man that I find so comforting, like something I’m missing when I don’t encounter it often enough. It’s a joy and love for your fellow human that this world could use a lot more of, and I’d like to get some immersion therapy! I’ve not yet been to Niger, but we shall see; these pictures make a compelling case and remind me of something I saw so much when I was young: the energy and bustle of the developing world in an arid edge of civilization.

Part of today’s focus – dirty indoor cooking technology – is a problem that plagues too much of the developing world. India and China are working hard to clean up this most-damaging environmental factor, and so many other countries(many in Southeast Asia or Africa) have developed programs to replace traditional no-ventilation in-house combustion technology. This is the kind of simple, low-tech substitution that can change the trajectory of entire villages, peoples and regions!

Once again I’m amazed at the variety and depth of our community.

Almost three decades ago my wife and I went to Niger with the Peace Corps (we got married so we could be sure to be stationed together – although it was only a matter of time at that point). In a way it was continuing a tradition for my family – my uncle had been in the first wave of Peace Corps volunteers in Thailand, and my father had been in the Foreign Service. Having no real identifiable skills that would apply to West Africa I was sent as an “agriculture technician”, which meant they could basically do anything they wanted with me. Which meant I was put to work to promote better cookstoves. 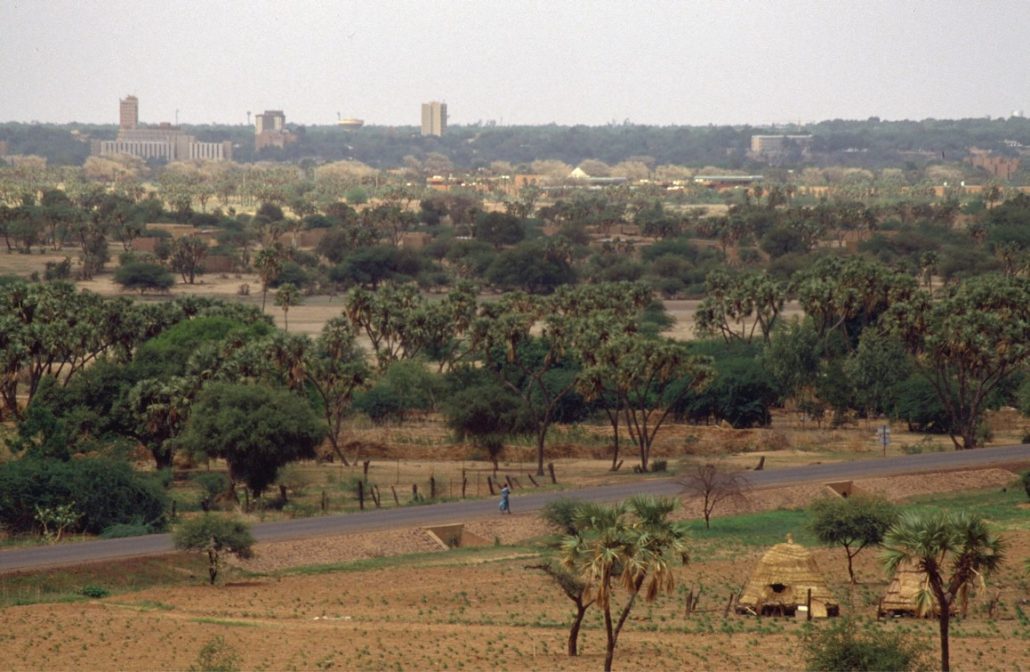 View of the capital, Niamey, viewed from across the Niger River.

At that time, and I am sure today as well, there was a large problem with deforestation and localized air pollution, mainly caused by the primary method of heating and cooking: three rocks around a fire and a large cauldron perched on the rocks. This was also hazardous to small children and meant the women (who really did almost all of the work in the villages) had to keep close watch on their flowing robes lest a loose end catch fire. 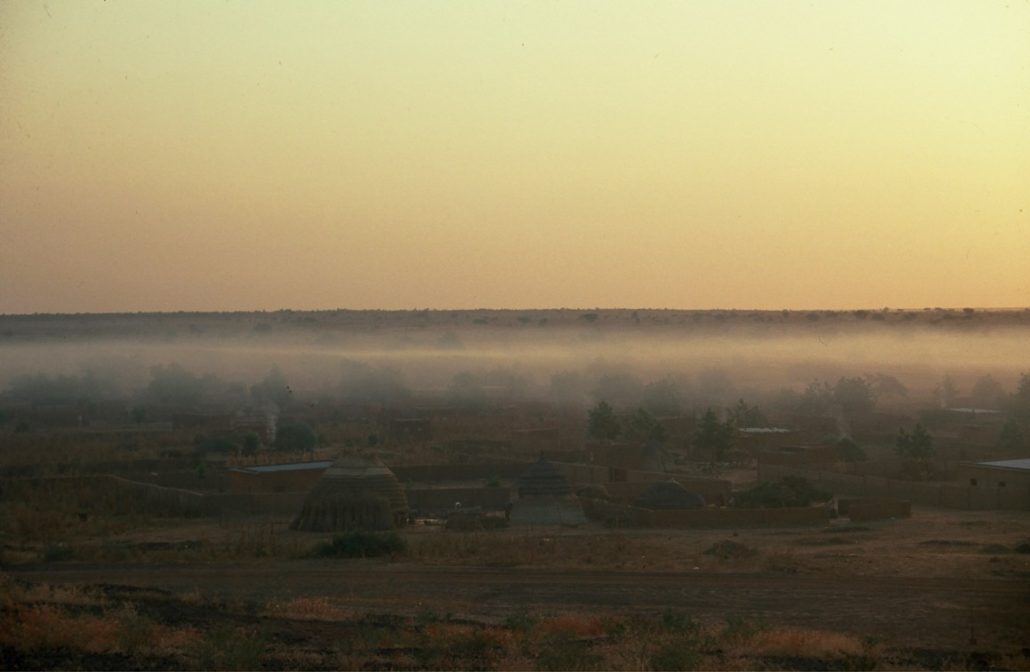 Smoke haze rising over a village at sunrise.

The Government of Niger had embarked on an aggressive campaign to help people transition to the “Mai Souki”, an enclosed stove made of metal or, in my case, a mud-straw mixture much like the houses were built with. 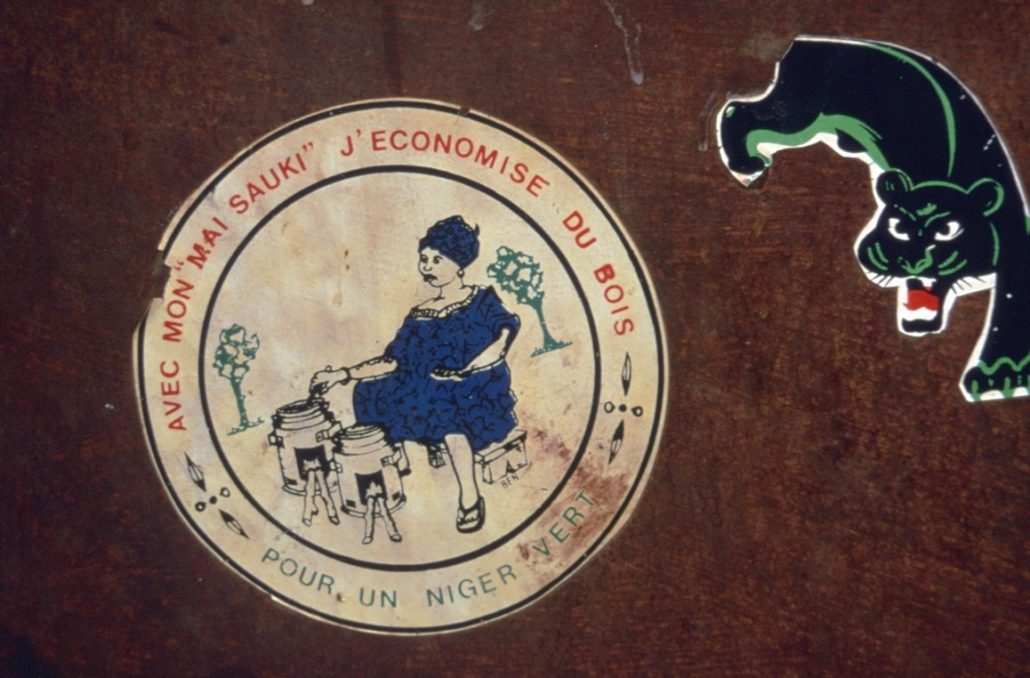 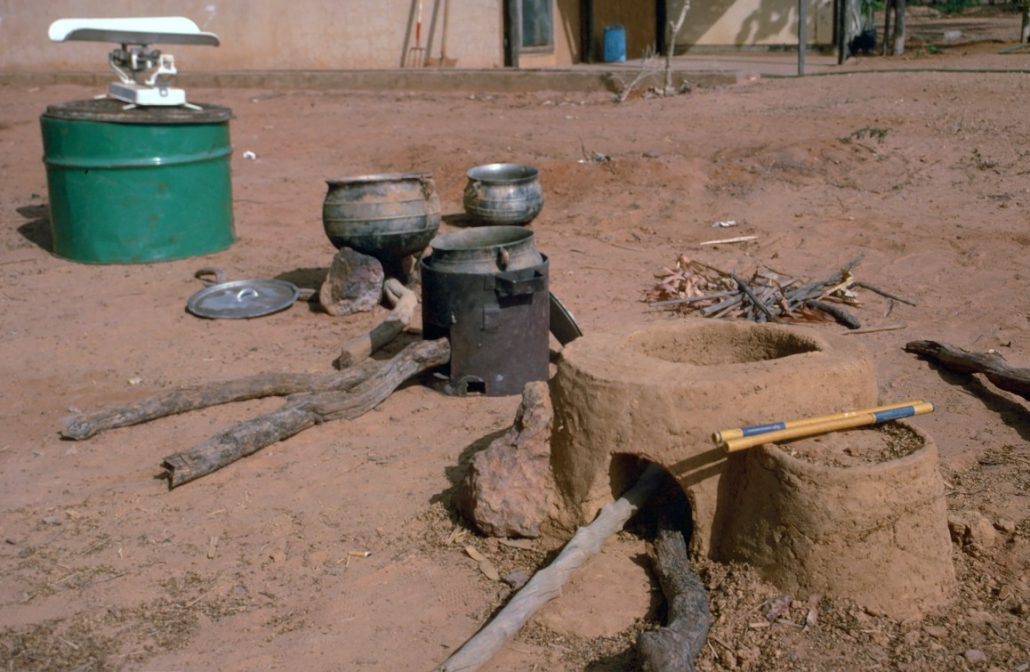 Testing our mud-straw stoves for efficiency

The problem with “development” projects in other countries were (and I am sure are) many – we saw evidence of this everywhere. In this photo a well pump installed by the French not that many years ago had fallen into disuse because of a lack of repair parts: 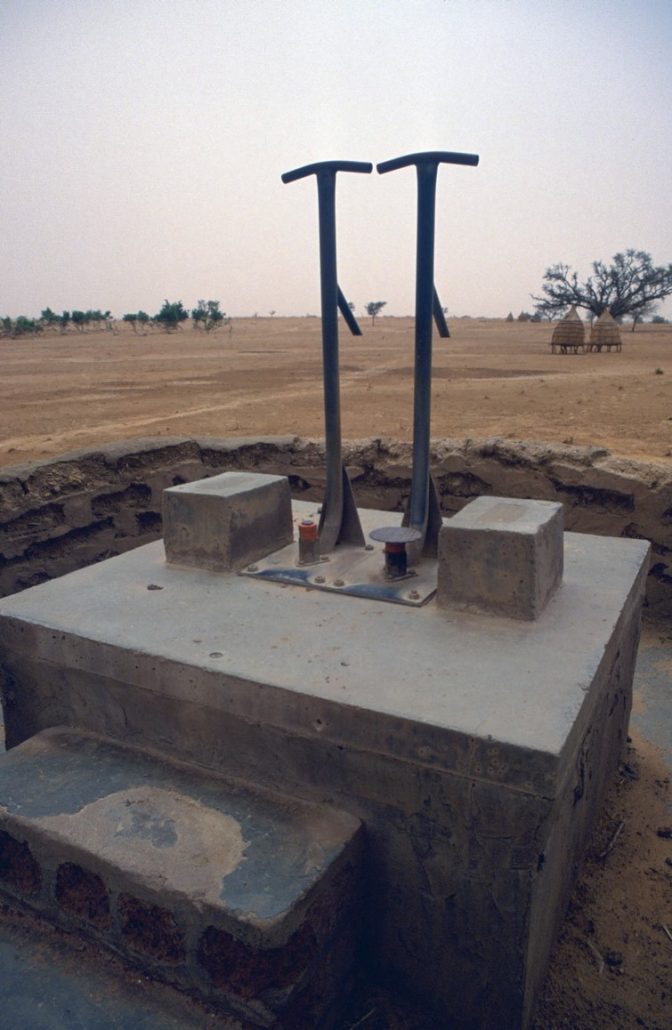 Hopefully this project would use local experts who could make a little money making the stoves and benefit many levels of society – as well as being relatively low-cost and therefore not as susceptible to “boofing” (skimming off money from foreign aid projects). This would sidestep many of the pitfalls that befall most development projects.

While I was in Niger I decided to take as many photos as possible; at that time I was toying with the idea of being a professional photographer (which was cured by working as an assistant to photographers in Chicago years later, but that’s another story). So here are some other shots from that time and place.

Millet is the lifeblood of rural Niger – well, since it is an extremely poor country in the Sahel, is 99% of Niger. It grows fairly well in the dry conditions, stores easily and is actually quite nutritious. So much of village life revolves around planting, harvesting, storing, transporting and preparing millet. To this day I can hear the rhythmic thudding of millet being pounded in the mornings by the women who would then make it into cereal, bread and many other foods. 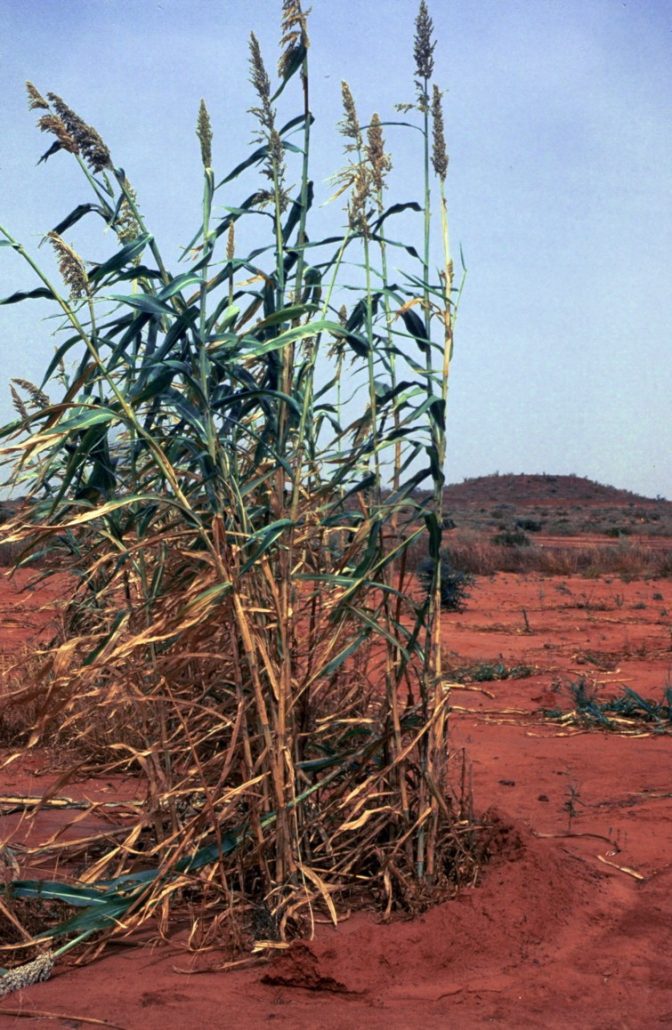 Millet growing in clumps with water-retaining berms around them 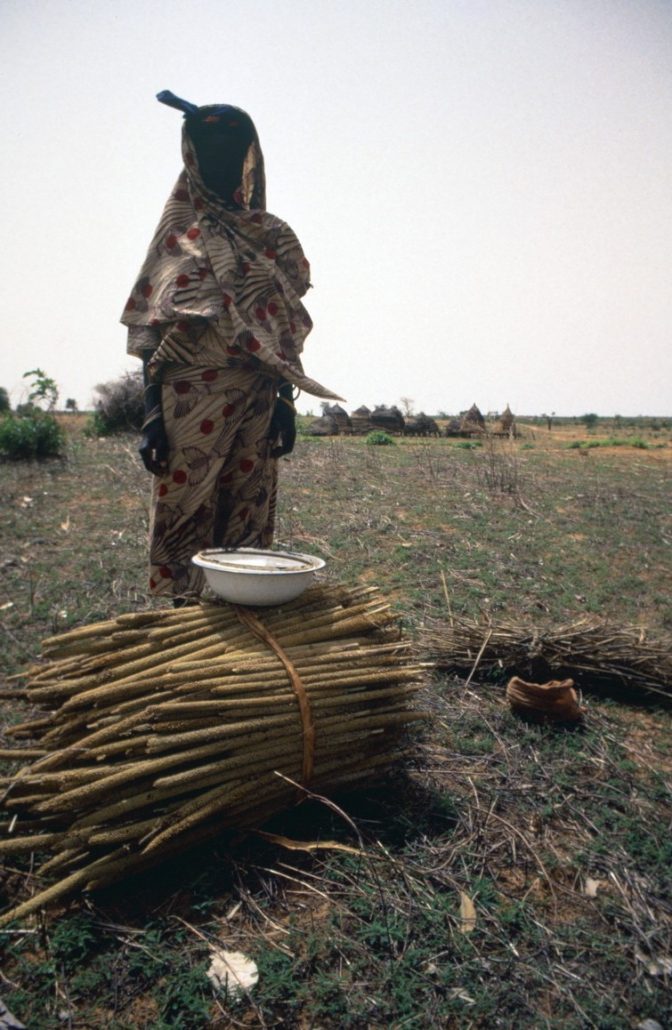 Women do most of the hard work in the countryside, here carrying bundles of millet back to the village 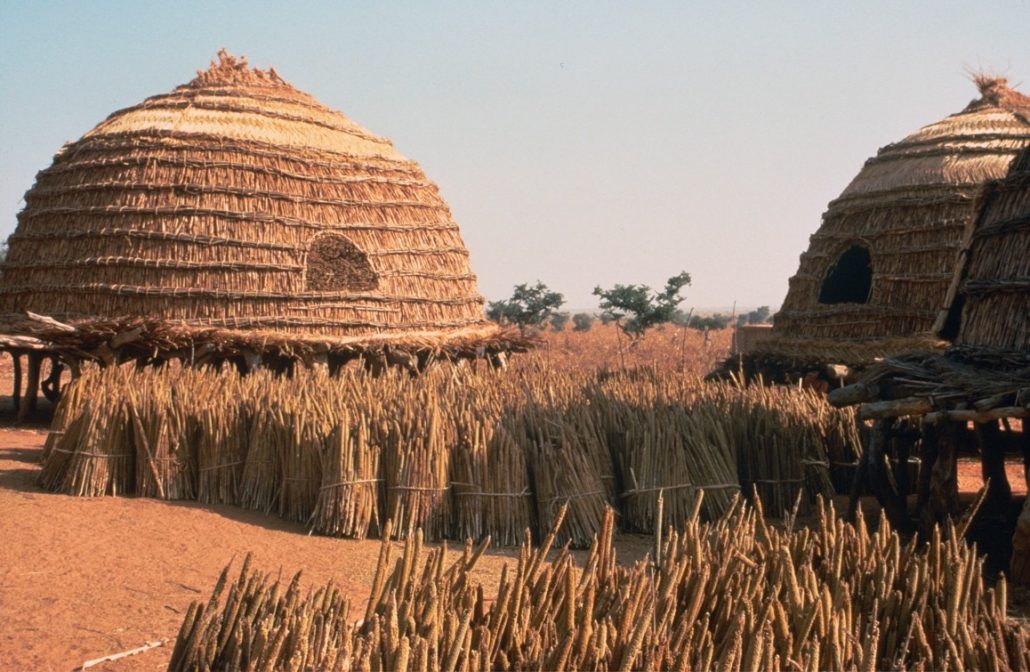 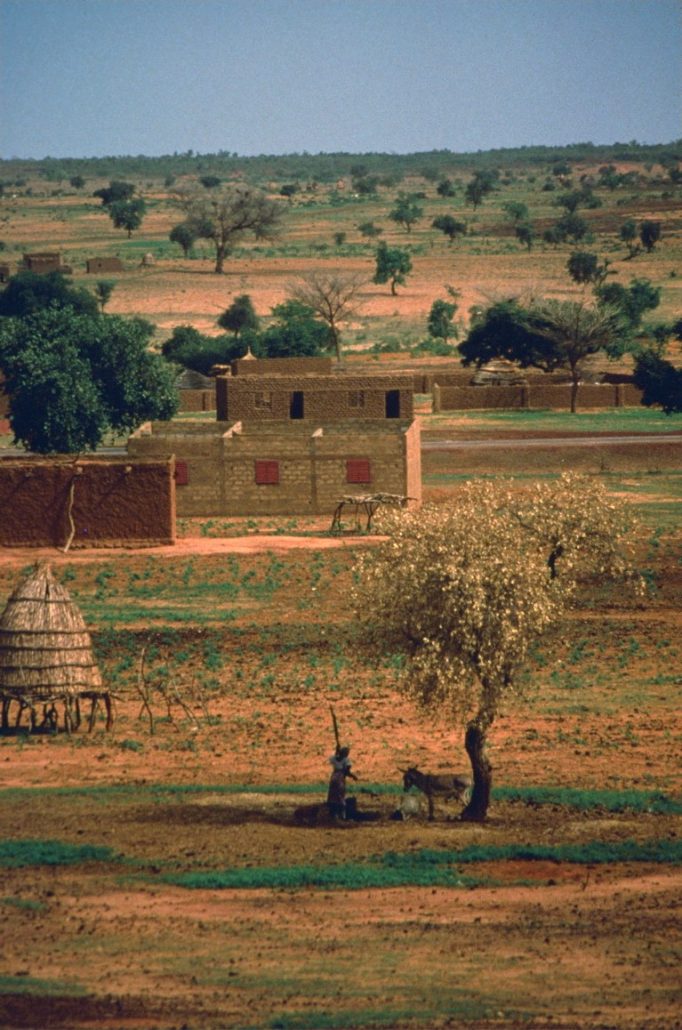 The sound of women pounding millet into flour was everywhere

One thing I did as soon as I was free from the training site (which was about 20 miles outside of Niamey) was to buy a simple bicycle so I could travel more freely about the city. This enabled me to explore not only Niamey but the surrounding countryside. I’m sure I was quite the sight, a pale “Anasara” (foreigner) with a big red mustache pedaling around the city. 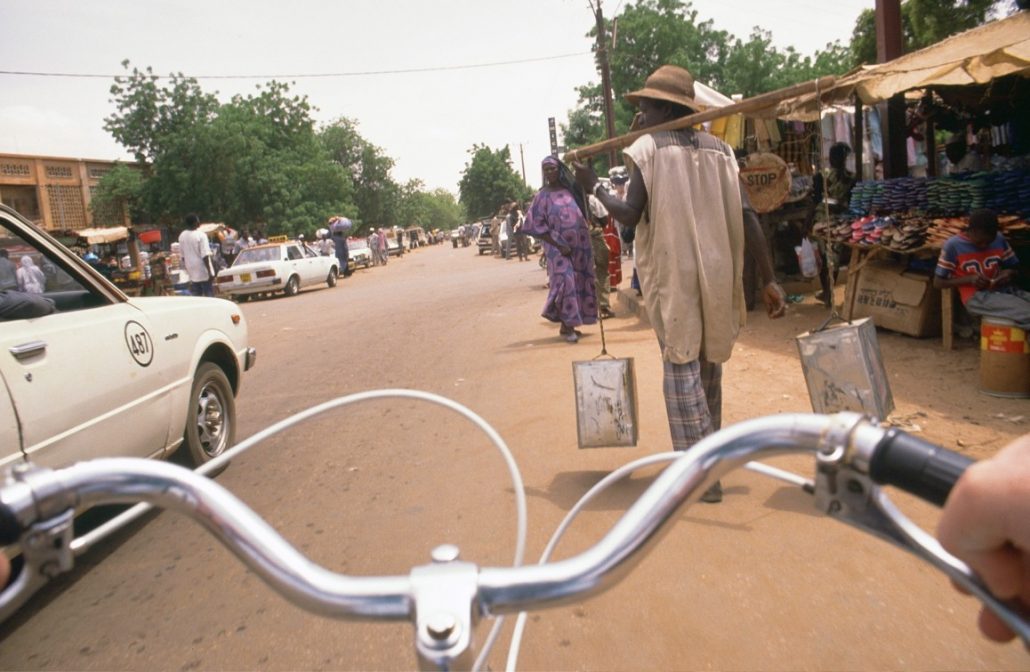 Riding my bike around the markets of Niamey

(this is Alain) Looks like a fun place to adventure! I love exploring areas like a real person, so glad to see this perspective. Not enough people shed their fear and explore which is a shame because it makes you grow in new ways.

Of course in the Grand Marché, alongside everything else, I could find repair parts in the local bike shop: 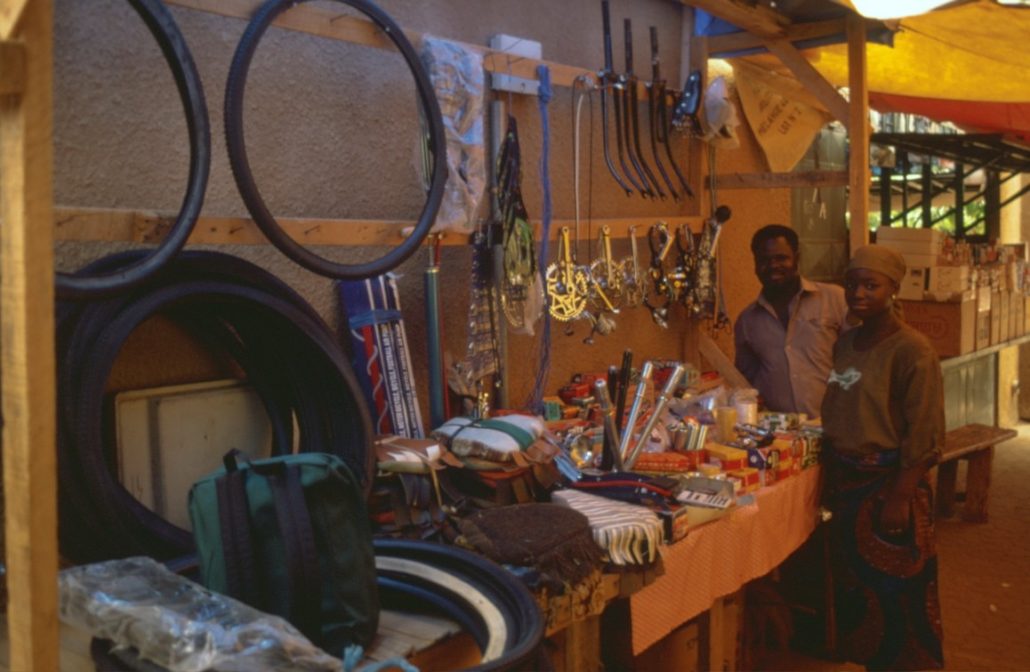 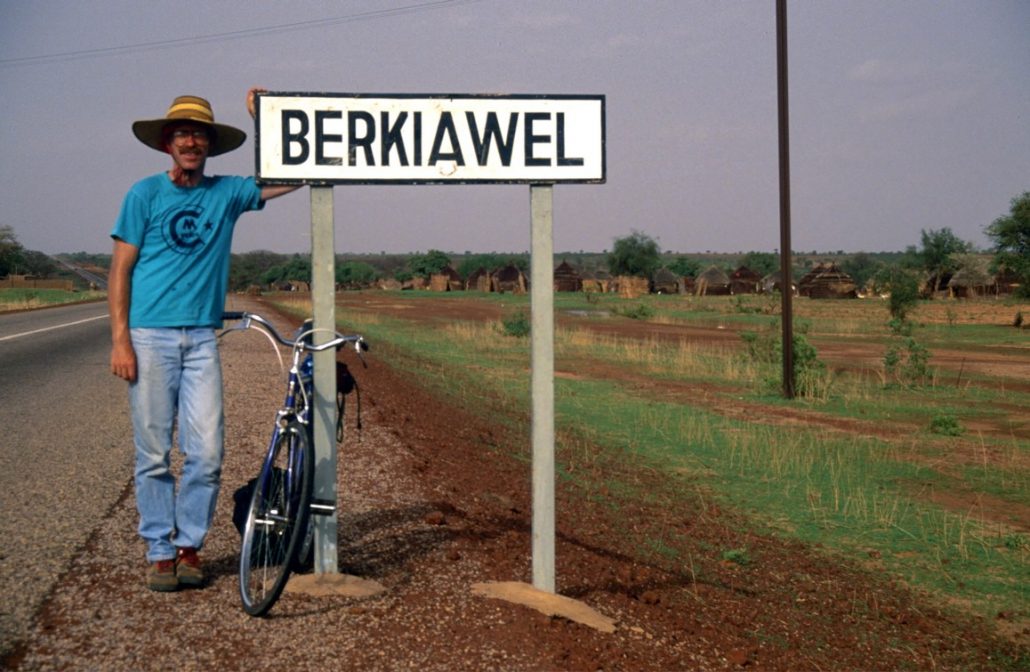 Exploring the areas farther away from the capital

Just because Niger was poor it did not mean that people were not productive. I’ve already told of the women who worked ceaselessly each day preparing food, gathering water and firewood and caring for the children. In the city people also worked hard to provide necessities like basic hardware… 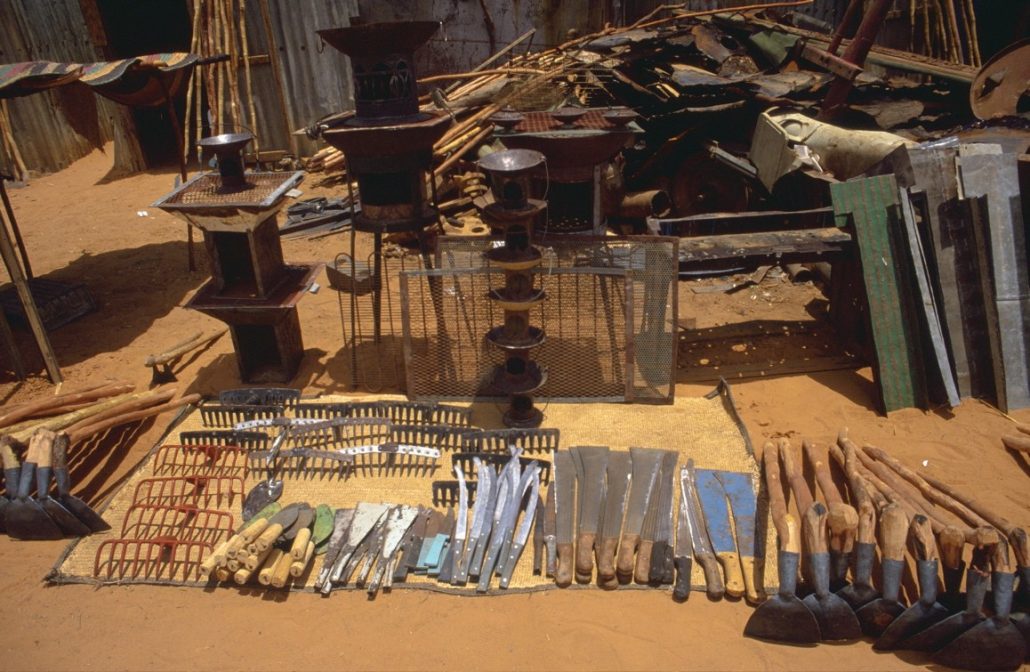 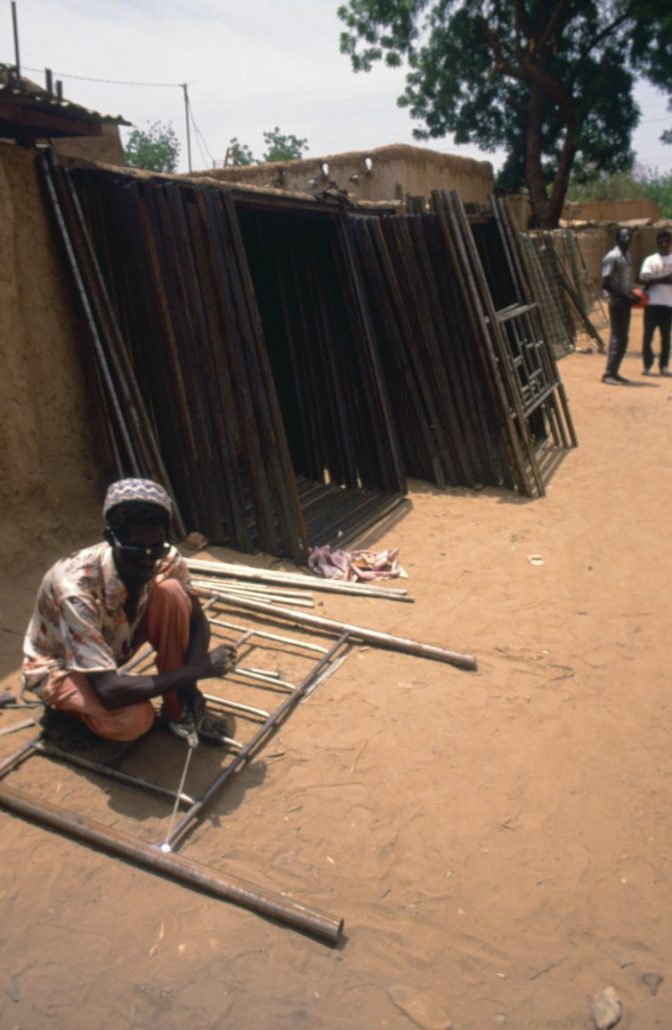 Nearby the training village we attended a large ceremony honoring a new Chef du Canton – sort of a Governor-level position. Integral to the ceremony were griots – storytellers – who greeted the wealthy attendees, presumably with songs praising their family. And dancers who were surrounded by the griots who now beat the rhythms to the dances – and curiously, younger women carrying large metal bowls. We wondered what these were for until the end of the dance, when these ladies came up to the most important (or wealthiest) in the audience who produced wads of bills with a grand flourish and tried to outdo each other in how much money they threw into the bowls (and how flashy they could look while doing it). 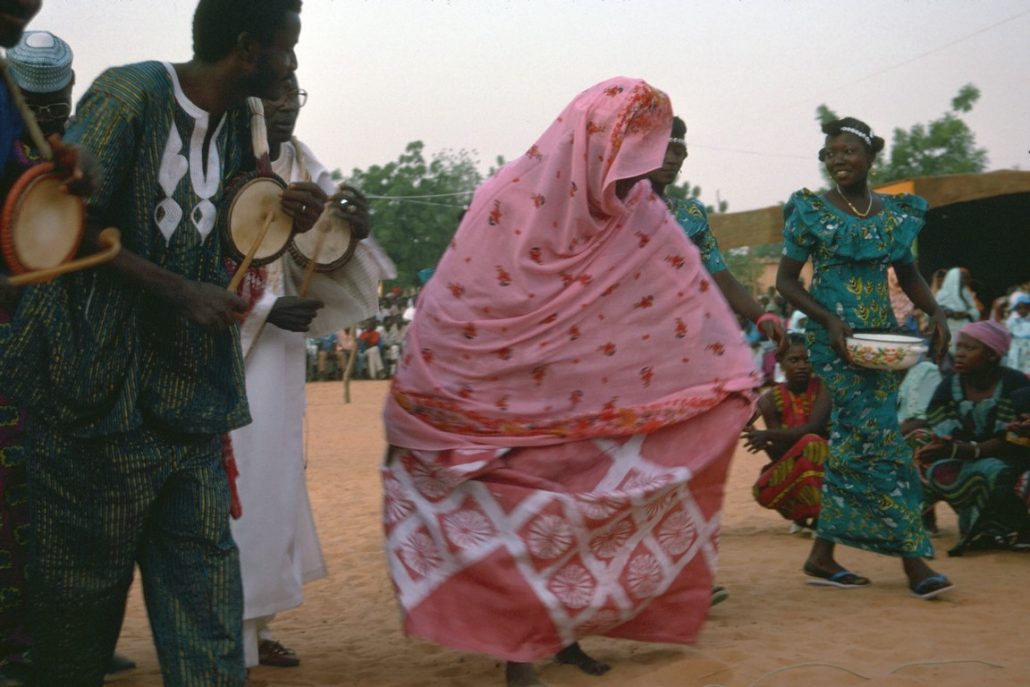 The countryside around Niamey was beautiful in its own way. The Niger River runs right by the city and was plied continuously by fishermen and provided wonderful views from restaurants on the plateaus alongside it. 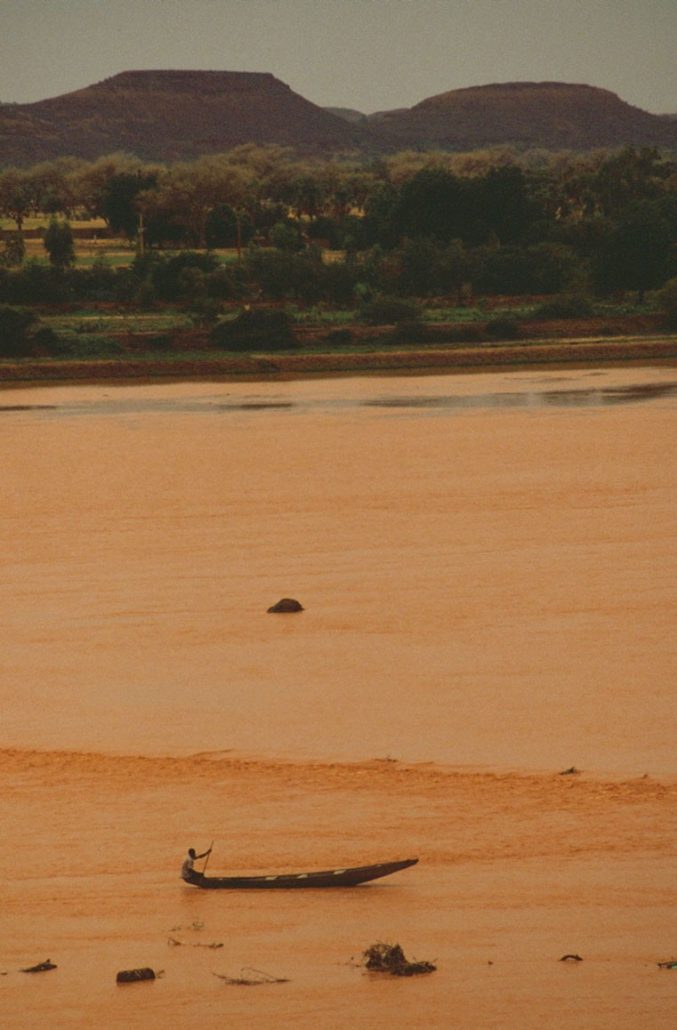 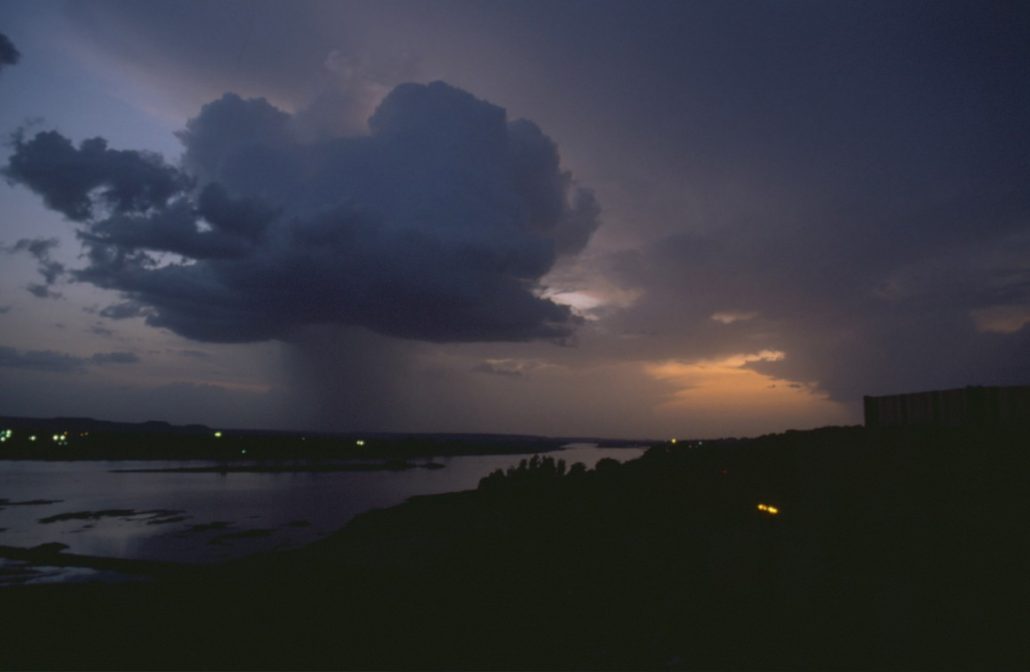 What led me to post this story and photos was a video recently in BJ of a dust storm. The reminded me of the time we were visiting a larger village to the north, traveling in one of the ubiquitous minibuses that move people and goods all around West Africa. On this occasion, at the change of season between months of dry weather and the short rainy season, our bus broke down with a flat tire. As we waited for the repair to be made we all watched with growing interest the front wave of the first storm of the season. Imagine months of sand and dust building up on the land, along with dried dung and who knows what else, all driven into a wall of dust by the advancing storm. Minutes after these photos were taken the world had turned red as we hastily scrambled back onto the bus, with no little amazement and head-shaking at the foolish white boy who waited until the very last moment to get one final photo. 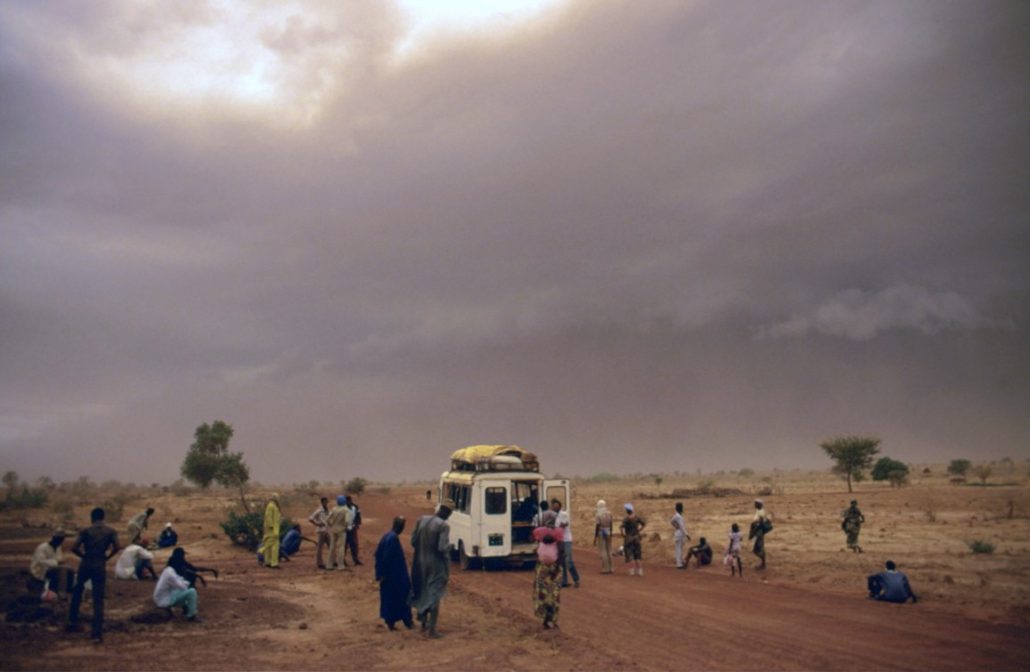 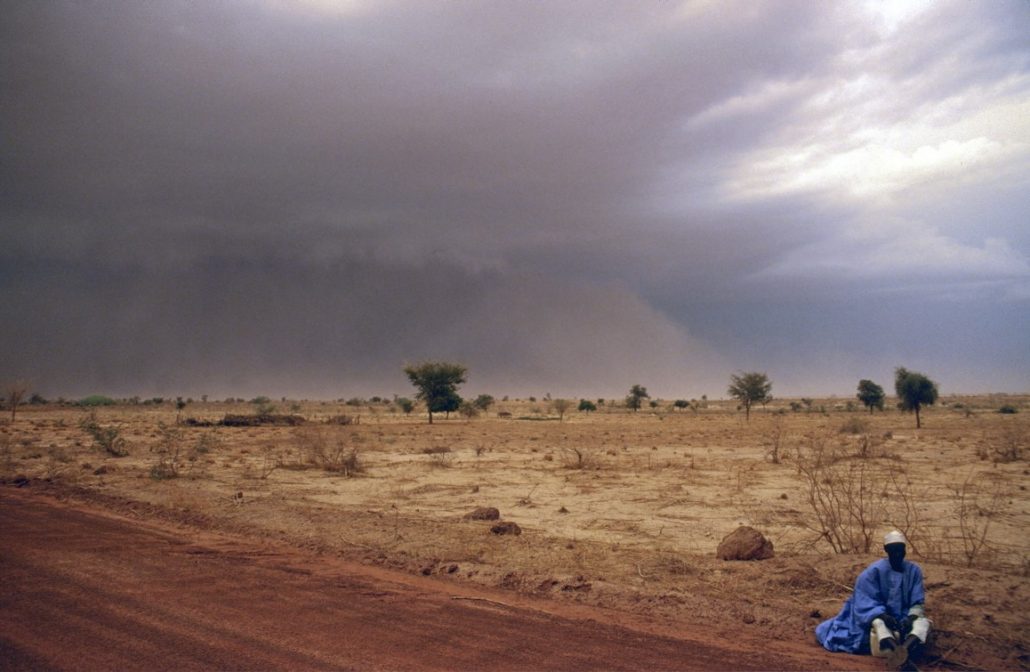 Perhaps the most surreal of sights was when the annual Paris-Dakar race roared past the village. First came the motorcycles, with their terminator-like riders, then the 4WD cars and trucks, all passing by bemused locals who basically only paused while going about their daily business. 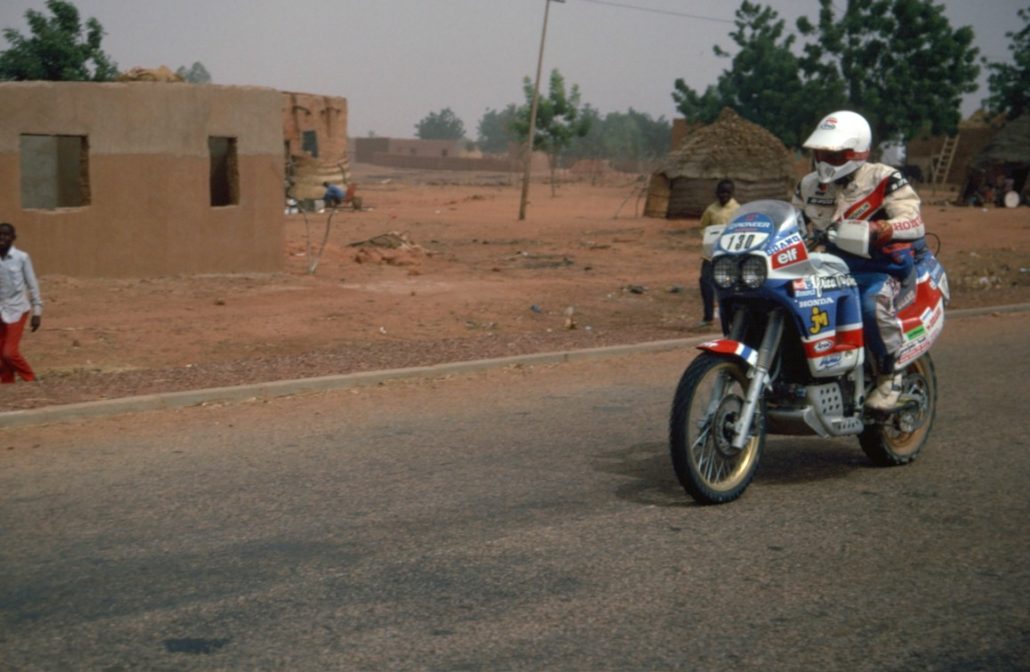 There are many more photos and stories, but this will have to do for now. My time in Dakar, Senegal with trips to Bamako, Ouagadougou and other West Africa locations might be fodder for another post at some time but for now, happy trails.

Thank you so much BretH, do send us more when you can.

Let me thank you for this most sublime submission. I do need to get back to Africa soon, and I hope to see more of your pictures and hear more stories. If I could swing a tour of West, Central, Southern, East, then North Africa, I’d truly be in heaven, but I couldn’t leave my beloved kitties for that long, even if that was 5 separate trips! Truly, one could easily spend a lifetime traveling around Africa and just begin slaking your thirst.