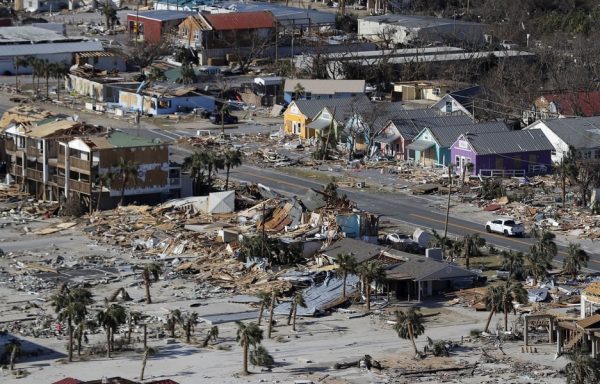 Friday afternoon the government released its Fourth National Climate Assessment, mandated by Congress. Friday afternoon of the four-day weekend, of course, is a good time to bury it. But we’ve become accustomed to these tactics, and the report did not go unnoticed.

Thirteen government agencies contributed. The report looks solid, an indication that Donald Trump and his climate deniers couldn’t mess with the agencies’ mandates. This is a pattern that has shown up before in sanctions against Russia. Trump tweets one thing, his political appointees toe his line, and the agencies do their job. It’s encouraging that parts of the government can do their jobs.

Unfortunately, the report is written in relatively difficult language, so it’s slow going. Here are the summary findings.

Communities. Climate change creates new risks and exacerbates existing vulnerabilities in communities across the United States, presenting growing challenges to human health and safety, quality of life, and the rate of economic growth.

Economy. Without substantial and sustained global mitigation and regional adaptation efforts, climate change is expected to cause growing losses to American infrastructure and property and impede the rate of economic growth over this century.

Interconnected Impacts. Climate change affects the natural, built, and social systems we rely on individually and through their connections to one another. These interconnected systems are increasingly vulnerable to cascading impacts that are often difficult to predict, threatening essential services within and beyond the Nation’s borders.

Actions to Reduce Risks. Communities, governments, and businesses are working to reduce risks from and costs associated with climate change by taking action to lower greenhouse gas emissions and implement adaptation strategies. While mitigation and adaptation efforts have expanded substantially in the last four years, they do not yet approach the scale considered necessary to avoid substantial damages to the economy, environment, and human health over the coming decades.

Water. The quality and quantity of water available for use by people and ecosystems across the country are being affected by climate change, increasing risks and costs to agriculture, energy production, industry, recreation, and the environment.

Health. Impacts from climate change on extreme weather and climate-related events, air quality, and the transmission of disease through insects and pests, food, and water increasingly threaten the health and well-being of the American people, particularly populations that are already vulnerable.

Ecosystems and Ecosystem Services. Ecosystems and the benefits they provide to society are being altered by climate change, and these impacts are projected to continue. Without substantial and sustained reductions in global greenhouse gas emissions, transformative impacts on some ecosystems will occur; some coral reef and sea ice ecosystems are already experiencing such transformational changes.

Infrastructure. Our Nation’s aging and deteriorating infrastructure is further stressed by increases in heavy precipitation events, coastal flooding, heat, wildfires, and other extreme events, as well as changes to average precipitation and temperature. Without adaptation, climate change will continue to degrade infrastructure performance over the rest of the century, with the potential for cascading impacts that threaten our economy, national security, essential services, and health and well-being.

Oceans & Coasts. Coastal communities and the ecosystems that support them are increasingly threatened by the impacts of climate change. Without significant reductions in global greenhouse gas emissions and regional adaptation measures, many coastal regions will be transformed by the latter part of this century, with impacts affecting other regions and sectors. Even in a future with lower greenhouse gas emissions, many communities are expected to suffer financial impacts as chronic high-tide flooding leads to higher costs and lower property values.

Tourism and Recreation. Outdoor recreation, tourist economies, and quality of life are reliant on benefits provided by our natural environment that will be degraded by the impacts of climate change in many ways.

There’s not much surprising, although changes seem to be taking place more rapidly than anyone expected.

The New York Times, Washington Post, and AP all have pretty good summaries.