Happy New Year to all!

We’re starting things out right, with more from Le Comte’s travels in Africa. Today, just a peek, but we’ll pick up steam on Thursday with a big dump.

Have a great day, everyone!

This segment was a continuation of our adventure in the Kalahari, completely off-grid and without AC. As I described in the previous entry, things are super dry here, with daytime temps at 115 degrees. Nights are delicious, high 50s, low 60s. Our accommodation was a luxury raised tent, with shower and toilet; gas lamps were used until recently, but those have given way to a low power lighting system that utilizes solar collectors.

There was an omnipresent wind while we were there, sometimes quite strong.

The Kalahari/Okavango Delta route is the second largest animal migration, after the Serengeti. It had been decimated by cattle fences during the first half of the 20th century, but the government of Botswana made it a policy point to remove the fences; biologists have surmised that for the zebras and wildebeests, there was genetic memory of the migration route.

This is how it looks at the water holes.

Game drives in Botswana started at about 6:20 am. We rode 6 pax per vehicle; unlike those we’d ridden earlier, the trucks in the Kalahari had a top rack for people who wanted to climb up to get scorched and nauseous.

The Countess and I passed on that experience and opted to stay below.

The tour we were on was great in that it didn’t cram guests three across – we had plenty of room to stretch our legs and to be comfortable. 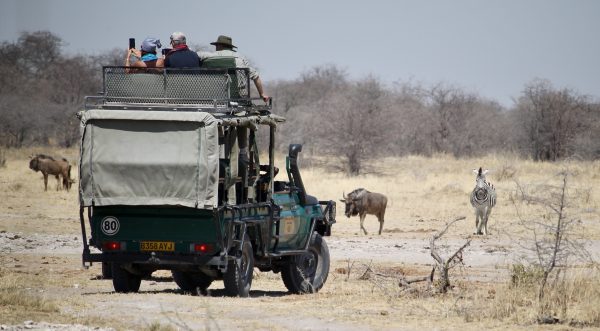 This is the Makgadakgadi Salt Pans. During the rainy season, this low area fills and becomes an oasis of life – krill and birds abound.

During the dry season, it is inhospitable to life, with zero humidity and an arid nature that cuts right through you. To get caught out in this space without resources is to die. Our tour included a significant amount of time on quad cycles to dinner and camp. 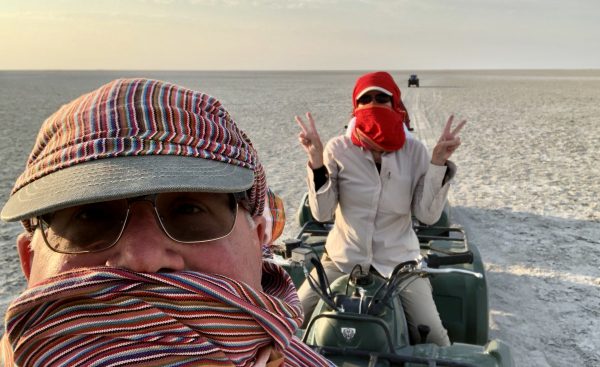 It was a dusty afternoon 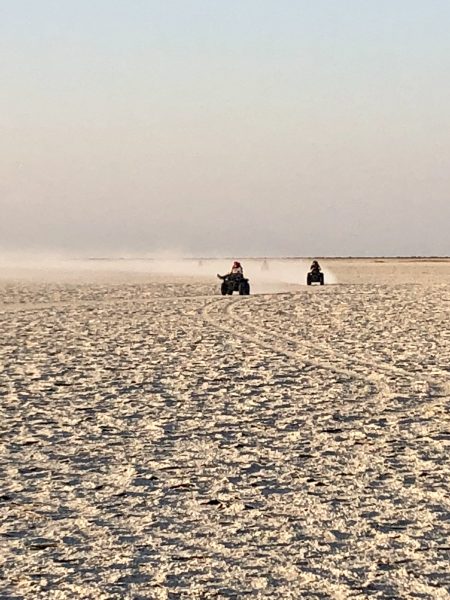 So this is where we slept – it was fantastic. About 2 in the morning, the wind was beating that green cover into my face and woke me up. As I opened my eyes, it was clear that the moon had finally set as the band of the Milky Way was brilliant across the sky.

I had the awkward task of collecting our clothes the next morning, as they’d blown away – thankfully, there was some distance between us and other people’s beds. 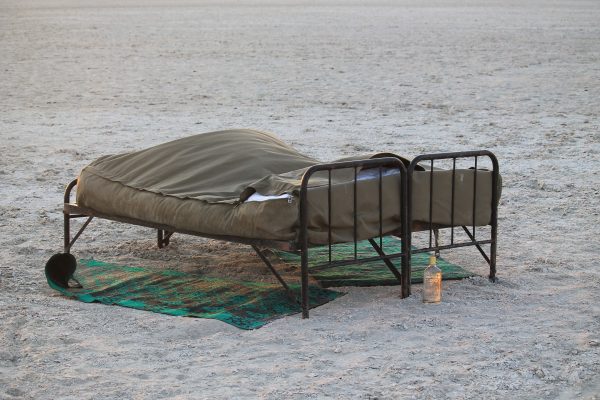