Several Floriduh! Men decided to get into the spirits of the holidays!

Four men were caught red-handed trying to get away with $500,000 worth of Patron Tequila at a Tampa-area truck stop.https://t.co/SOkEUzfyBA

Fox 13 Tampa Bay blends up the story for us:

THONOTOSASSA, Fla. (FOX 13) – Half a million dollars’ worth of tequila was stolen from a truck driver in Hillsborough County, and four men are charged with the crime.

Sheriff’s deputies said a truck driver was heading from Miami to Tampa when his trailer went missing after he went into the Tampa Truck Stop for dinner off U.S. Highway 301 around 11 p.m. Sunday.

“We do know it was organized, and this had been planned because the box truck was there to meet them,” said Danny Alvarez, a spokesperson for Hillsborough County Sheriff’s Office.

Deputies arrested Vidal Estrada, Lemuel Escobar, Humberto Ramirez and Alberto Obaya for burglary and other crimes related to the liquor theft. They are accused of detaching and stealing a trailer with 966 cases of Patron tequila inside – worth $507,105 in retail value.

According to the Hillsborough County Sheriff’s Office, the truck driver went into the truck stop for dinner around 11. The owner of the convenience store told FOX 13 they close their restaurant at 5 p.m. So it’s unclear how long the driver was inside before he noticed his trailer was missing.

Deputies said the driver called to report it missing around midnight.

The thieves somehow managed to get roughly 11 miles away to Ike Smith Road and McIntosh Road in Thonotosassa.

“Around 12:30 a.m., we had located the trailer being off loaded into a box truck by four individuals,” Alvarez said.

By the time of their arrests, the suspects had moved 20 cases. Deputies said it was lucky the thieves stayed close by.

“Since it was right there near the highway, that truck could have easily gotten on the highway and headed north, south, east, or west and would have been out of our county in no amount of time,” said Alvarez.

As for the liquor, deputies recovered it all and are figuring out where the tequila was supposed to end up.

Deputies said the truck driver hauling the tequila is working with them to answer any other questions about the crime.

No word on whether they were also in possession of triple sec, limes, and salt.

END_OF_DOCUMENT_TOKEN_TO_BE_REPLACED

Warren making a 2020 run is brave considering the only female candidate who has any chance at the White House is Yes, I'd Vote For a Woman, Just Not That One.

How does Elizabeth Warren avoid a Clinton redux — written off as too unlikable before her campaign gets off the ground? https://t.co/E6zfTkzNYy

I refuse to engage in any conversations about the likeability of women running for President in 2020.

If all women political analysts did that it would make the misogyny more obvious as unlikeable men are left to wax poetic about women’s personalities ignoring their policies.

Got an email from my senior & favorite Senator this morning:

When Elizabeth first decided to run for the Senate in 2012, she ran against a Republican senator who had a 65% approval rating, $10 million in the bank, and a cool pick-up truck…in a state that had never in its history elected a woman senator or governor.

We’re used to being compared to any woman who’s ever lost an election, and we’re used to the anonymous, angsty quotes from “concerned” insiders, and the she-can-never-win garbage churned out by the Republican propaganda machine and recycled by the media.

And you know what? We’re also used to proving them all wrong. Because here’s the truth: we outraised, outworked, and beat – by eight points – that Republican senator nobody said we could defeat…

If you get frustrated when commentators spend more time covering Elizabeth or any woman’s “likability” than her plans for huge, systemic change to make this country work for all of us, do something productive about it:

Chip in $5 right now to becoming a founding member of our Elizabeth Warren ? Fund. (We’re calling it the “You Know it When You See It” Fund because, well, you know why.)…

I’ve tweeted regularly abt this misnomer that Hillary got bad press bc she was “bad candidate” and how folks, including Dems, were being wildly naive if they thought institutional sexism isn’t part of our political culture

hating the Clintons has long been a DC media profit center. trying to drag Hillary into the 2020 race here is latest giveaway

I’m still waiting for the weekly analysis on why Republicans have been able to win the popular vote for President only ONCE in the last 30 years. What does that say about the useless metrics used to make inferences about “likability”? https://t.co/7D3pfdXAtS

IMO the desire by Rs to turn Warren into Hillary suggests the GOP has not yet figured out how to beat a Democrat who is not the 2016 iteration of Hillary. https://t.co/QfYcV6aIEX

END_OF_DOCUMENT_TOKEN_TO_BE_REPLACED

Sister Devon and I had another nice day- Devon spent a good deal of time at the beach, and I spent a good bit of time floating in the pool- I call it doing manatee impressions. Spent some time splashing around with some of the local kids, who are on Christmas vacation, and I impressed them by knowing some Fortnite dances by name. We all pissed off the old grumpy guy who was sunbathing on the chair and expected to remain totally dry at the pool. Fuck him.

Afterwards, Devon and I went to dinner and people watched (I had ceviche and a chile relleno, she had something vegetarian and a tequila). We passed the time playing a game I made up called “escort or daughter,” which is honestly much harder than one would think. More on this in a minute.

We then went to a shoe store of hand made shoes from Spain (true story, I gasped and said “SHOES!” and made a beeline for the place), where I picked up a fancy pair of shoes for BFF Tammy: 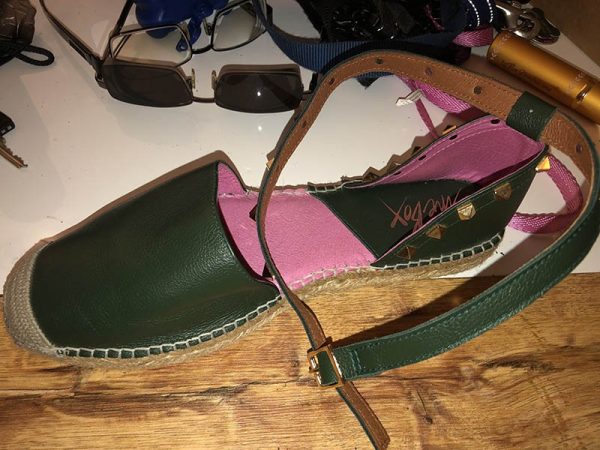 Devon tried on a bunch of pairs but could not make up her mind, and the salesman (Juan Cortez is his name) turned to me and said “You should just buy a pair for your daughter.”

And just like that, the game of “escort or daughter” was ruined for me.

We’re home now, and I am nursing my bruised psyche and watching more Boston Legal.

END_OF_DOCUMENT_TOKEN_TO_BE_REPLACED

Happy 2019 — the year BLADE RUNNER, AKIRA and THE RUNNING MAN are all set in. Three wonderfully positive portrayals of the future!!! pic.twitter.com/57HALAw59O

5) Play in a band pic.twitter.com/uzpKxYiKjB

END_OF_DOCUMENT_TOKEN_TO_BE_REPLACED

That said, as Trump decompensates, a few other brave Republican voices will be raised in a holy chorus which will lead to precisely nothing. Each of them will get the same treatment from the press – dutiful stenography, mild veneration, and the hope that Trump will take it up and tweet about it so they can report on the tinkle match.

Perhaps one or two members of the press could also be bothered to ask the obvious followup: “What are you going to do about it?” If the answer is nothing, just include that in the story (at least) or the headline (at best). “Romney Complains about Trump; Proposes No Solution” or “Sasse’s Trump Sass Not Reflected in any Votes”. It doesn’t seem that hard, though in practice it’s clearly impossible.

END_OF_DOCUMENT_TOKEN_TO_BE_REPLACED

My take on New Year’s resolutions was formed watching Ordinary People when I was but a wee lad. In that movie, around New Year’s, Dinah Manhoff’s character shares the resolution “Let’s agree to have a really good year” with one of her friends, and the next we hear about her, we learn she committed suicide. To me, that’s about what a resolution is worth.

If you think that’s a dark tale, I have an even darker one for you: I just returned from a trip to the Dakota heartland, where the real (read: old and white) Americans live. Since the politics of 2019 and most of 2020 will be dictated by them, and since anecdotes are the only way to really know what our mysterious overlords are thinking, here’s one:

The real American town where I grew up is 100 miles from anything else big. (By “big”, I mean over 5,000 in population, with shopping and healthcare services). For the past 75 years, my home town has had a nursing home. For the past 50 or so years, an even smaller town about 20 miles away has also had a nursing home. Together, they housed around 200 patients in facilities close to where those patients had lived for most of their lives. Nobody wants to go the nursing home, but they were both clean, well-run, and nearby.

Well, no more. One of these homes has closed, and the second is closing in the next month or two. The reasons are varied: Some shitty corporation from Jersey bought one of the homes and ran it into the ground; Medicaid reimbursement (applicable to 2/3 of patients in South Dakota) falls an average of $34/day short in paying the expenses of a patient at these small town facilities, and so on. The net of all this is that patients are being moved to homes at least 100 miles away, and in some cases much farther. Decent jobs (by area standards) at those homes are also leaving town.

The South Dakota state legislature is too busy making abortion punishable by drawing and quartering to do anything about this. The Federal delegation, all Republicans, aren’t going to do a god damned thing but shake their heads and sympathize. Everyone’s hands are tied because Tax Cut Jesus won’t let the evil government spend any more money on poors, even if they are old white poors who weren’t poor when they went into the nursing home, but all their money was spent as they lay in a moaning, incontinent fetal ball in the Alzheimer’s wing. Even though these poors might deserve something, the other poors could be brown and undeserving! And, as Tax Cut Jesus clearly said in John Thune’s copy of the bible, “Better that 100 deserving white poors be hauled hundreds of miles from their relatives to die alone, than one undeserving brown poor get a couple of bucks of government money.”

What’s interesting to me is that most of the people I spoke with – and these are old people, mind you, who might end up in the home very soon – had little hope. For a long list of complicated reasons, the home 20 miles away could possibly re-open since it was started by the community years ago. They recently had a successful $500K fundraiser to buy back the equipment in the home from the last management company, which is only step one of hundreds needed to start it up again. And even if they do start it up, the fundamental issue of Medicaid reimbursement not covering the home’s nut remains. You can’t expect to have a bake sale every couple of weeks to pay the hundreds of thousands of dollars needed to house the old in this county. That’s the government’s job, but out in Trumpland, any government intervention is by definition evil, so it ain’t gonna happen.

This is what it means to live in a true red state. As long as sluts can’t get abortions and taxes never go up, every other human misery is acceptable.

END_OF_DOCUMENT_TOKEN_TO_BE_REPLACED 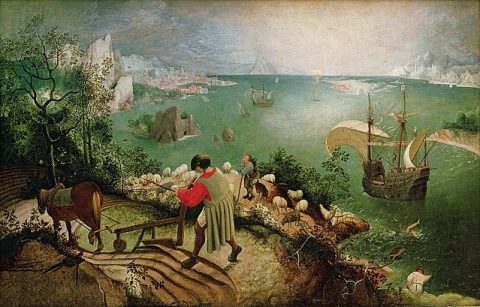 The future comes to an MIT gym:

Image: Pieter Brueghel the elder, The Fall of Icarus, c. 1558