Exchange between Rep. @IlhanMN and Elliott Abrams: "I fail to understand why members of this committee of the American people should find any testimony that you give today to be truthful." pic.twitter.com/n8aMbH1g3G

She is herself a refugee from wars like those in Central America during the 1980s. Abrams was one of the people responsible for supporting the people who made those wars. The instability that drives people from their homes to the United States today can be traced back to those wars. Now Donald Trump wants Abrams to help with Venezuela. Omar’s questions and comments are appropriate as Trump threatens military intervention in Venezuela.

I follow a number of members of The Blob on Twitter. They have interesting things to say, although they can be clannish and tend to ignore the hoi polloi. A few of them follow and interact with me. Yes, there is a Blob.

The Blob people I follow seem basically decent. I got some surprises last night.

Agree. Elliott Abrams is a devoted public servant who has contributed much of his professional life to our country. It’s time to build bridges in America and not tear people down. https://t.co/ncI9Bo31jn

Disgraceful ad hominem attacks by @IlhanMN on my @CFR_org colleague Elliott Abrams. She doesn't seem to realize he is a leading advocate of human rights and democracy–not a promoter of genocide! More evidence of the loony left I caution Democrats about: https://t.co/dyVdVOS7PY https://t.co/yjeLJksYCj 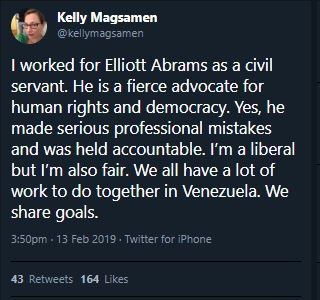 Look, I can’t defend Elliott Abrams — mainly because I only know him from Middle East policy, where I’ve had sharp but largely polite disagreements. But you know who I can defend? @kellymagsamen. She’s one of the finest people I know — and better than anyone currently @-ing her.

In turn, the Blobbies got some surprises of their own, many in the worst traditions of Twitter. Certainly some of the worst ratios I’ve ever seen, as well as a great deal of thoughtful pushback, including from me. Here’s an extended version of what I said.

Elliott Abrams was part of the group that encouraged violence and genocide in Central America. He lied to Congress about Iran-Contra, which he also was involved in. Nobody with that record should ever be in government again.

The foreign policy community is small, and everyone knows everyone else. Some of the apologia for Abrams was that he was a great mentor and colleague. What the public saw was the genocide and the dishonesty.

The lack of self-reflection in the Blob tweets – the inability to recognize how those outside their charmed circle might look at Abrams – is why the country keeps making foreign policy mistakes.

Evaluation of mistakes is essential for good governance. So is accountability for those who make those mistakes. And I am being kind to use the word “mistakes.” It’s been mentioned many times that mistakes never disqualify anyone for further government service. They should, and Abrams is a particularly egregious example. The people around Donald Trump include some who were on the wrong sides of Watergate, Iran-Contra, and George Bush’s Iraq War.

The United States has a long list of mistakes for which people have been unaccountable. Interventions in Iran and South and Central America. The second Iraq war and the torture that took place. Domestically, we have the financial crash of 2009 and the corrupt election of 2016.

At one time, when the governing elites were few and communications slower, it was possible to keep those things swept under the rug. But they’re all coming out now. We have to deal with them. The Blob’s attempt to convince us that Elliott Abrams is a member in good standing of their company and deserves another job with high responsibility tars them all.