You are here: Home / Open Threads / On the Road and In Your Backyard

In my March 6th submission to On The Road(In Search of…Crystal Lake), I noted the following:

“One of the members of the local photo group that I’m a member of posted a picture of a bald eagle flying and said it was in the San Gabriels. I know they have bald eagles in Catalina(and I think the San Bernardino’s) but I’d never heard of there being any in the San Gabriels. The leader of our group asked me if I was interested in going up and photographing the birds, I jumped at the offer. It turns out that their nest is right by highway 39 north of Azusa in the San Gabriel Valley.

A little background on highway 39…there was quite a bit demand in the post war years for a highway to link the San Gabriel Valley with Angeles Crest Highway(the traverses the San Gabriels from La Canada Flintridge in the west to Wrightwood in the east. There were ski areas up there(Mt. Waterman, Kratka Ridge and near Wrightwood) and it would also be useful for residents that might need to evacuate in case of fire(we don’t rake enough, I guess). So the state built this highway that goes up the San Gabriel Canyon past two reservoirs, on up past the Crystal Lake area and on to Angeles Crest. This highway was completed in 1961. In 1978, there was a rock slide that took out a portion of the road just prior to it’s intersection with Angeles Crest and it’s never been repaired, so the road now ends at Crystal Lake. Crystal Lake is the only year round natural lake in the San Gabriels, it’s feed by springs at the bottom of the lake and is surrounded by tall mountain peaks in a horseshoe placement to it’s east, west and north.

So a few days after heading up with our group leader(we just got pics of one of the eagles sitting in the nest), I decided that I’d head up again and go all the way to Crystal Lake. It’s been a very wet year here in Southern California(we’ve had over 17″ of rain since the beginning of the year), I figured that the lake would be full of fresh water and would be a nice subject for some IR shots with the snow capped mountains in the background. As I got closer to the turnoff for Crystal Lake, I noticed a bit of snow on the side of the road. After I turned off the highway to the main road that goes to the campground and cafe up there, I noticed more snow on the side of the road. Once I arrived at the access road to the lake, it was blocked by a locked gate and the road was covered in snow. So the lake visit wasn’t going to happen(I wasn’t dressed for walking though snow), so I ended up stopping by the cafe/store and took a few pictures.”

So a month later(to the day), I made the trek back to Crystal Lake. I did not stop by the nesting Bald Eagles and proceeded directly to the recreation area by the lake. After negotiating the twisty road and sacrificing a poor squirrel I arrived at the parking lot behind the visitor station. The area had ceased to be a winter wonderland but there was still a bit of snow on the mountains. I proceeded across the road though the camp sites to find Crystal Lake.

I knew the road to the lake was to the west of the store/cafe but I didn’t download a map before I left and didn’t have cellphone reception, I was a bit lost. There really wasn’t a trail, I just continued in a westerly(I could see where the mountains were as a guide), but the terrain was rather rough in places. I passed this dead(probably bark beetles) in this rock slide. The tree is quite dead and you can see the color in it, while the surrounding healthy trees reflect infrared. 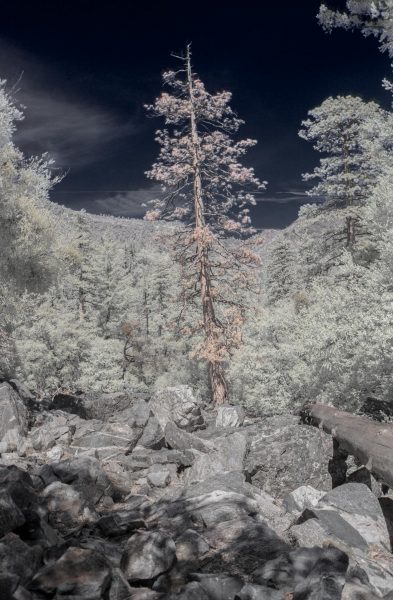 While I was still wandering though the forest, I found this prickly little fucker(it’s the term used by hikers in the San Gabriels) in a remaining patch of snow. Soon after taking this picture I ran across some parallel lines of rocks which turned out to be the trail to the lake. If I’d walked a bit further down the main road rather than walking though the campground I would have seen the sign for the Lake Trail. 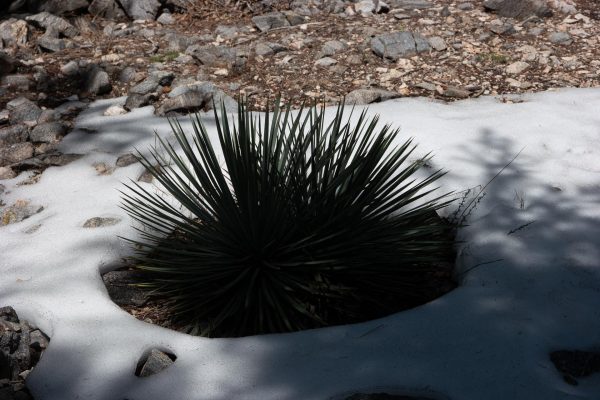 After hiking the lake trail for about a mile, I ended up in the parking lot for the lake. There is a stone stairway down to the lake itself. After all the rain we’ve had, I had hoped that the lake would be full, but there was still quite a bit exposed banks. After returning home, it seems that the last time it was completely full was 2011 after a wet season and a subsequent El Nino year. So I hiked around the lake for a good spot to take some pictures. This is from the southwest side of the lake. 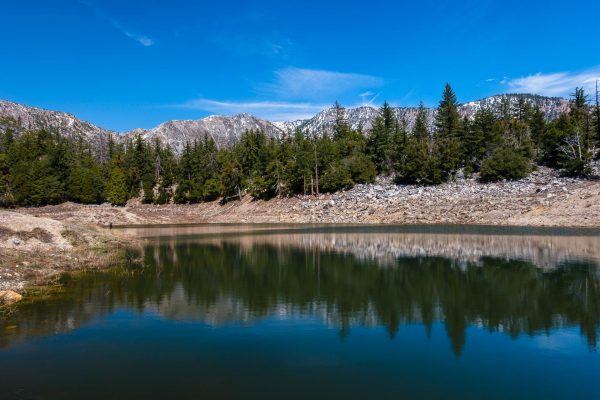 I couldn’t get all the way up to the lake and not shoot some IR could I? Nope, so here’s an IR shot of the lake with the mountains in the background with a visual overlay. 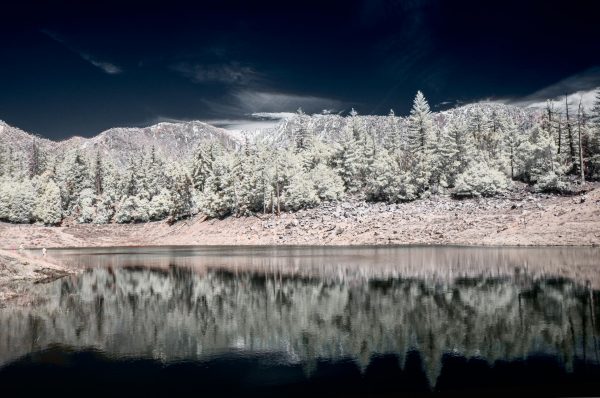 I didn’t take my tripod or panorama head, so I shot this panorama handheld, I think it still worked.