Brilliant. Hits the nail on the head.

"I had nothing to do with Russia helping me get elected."

Are you allowed to impeach a president for gross incompetence?

Russia robbed the bank after I asked them to and gave me the money, but I didn't have anything to do with it! What, was I supposed to give it back or something?

The president hasn't just refused to condemn a foreign power that attacked our democracy. He's also failed to protect the country's voting systems against future attacks. He betrays his oath every day.

"I am completely and utterly perplexed by those who argue that perjury and
obstruction of justice are not high crimes and misdemeanors." — Mitch McConnell, 2/12/99.

If you're white and you're worried that law enforcement is out to get you, it's probably because you broke the law. Just sayin'. https://t.co/15hZCg9hU3 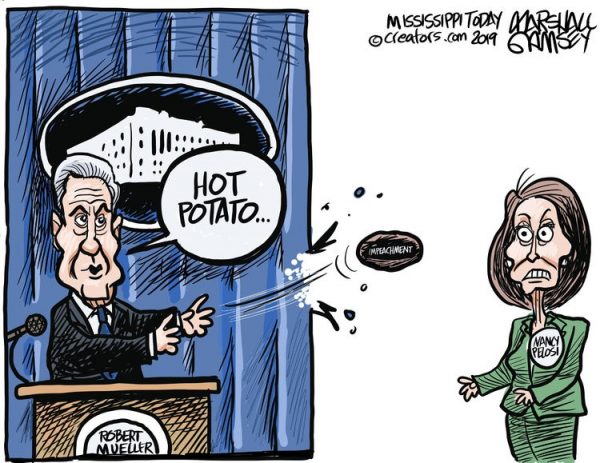 For everyone saying “Congress needs to do its job,” yes, you’re correct. And I don’t say this as a reason to not move forward w impeachment. But roughly half the Congress is determined to keep the other half from doing that job.

Those attacking Nancy Pelosi, please remember, this is the leader who, faced with the likely loss of the first Speakership of a woman in history, still pushed through the most important health care reform since the 60s KNOWING it was a career-ending vote for some in her caucus.

I honestly don't know what Nancy Pelosi is planning, or if she has a plan at all, but people keep asking me to have faith that Jeet Heer and Chris Hayes know more about political maneuvering than she does, and that just ain't happening.

I think it’s possible to believe:

B. Trump craves being the center of attention, & an impeachment investigation & hearing would animate him, highlight his strengths, & probably elicit his most florid demagoguery

Neither is reason to or not to impeach

On the Road and In Your Backyard
Next Post: Hypocritic Oaf »