Ok, it looks like my concern about the new site launching very soon is a bit off, sounds like it will be a week or more, not days. I’ve got a bunch of submissions, mostly multiple sets from a few folks. Please do continue to submit pictures, but don’t feel like it must be now.

Have a wonderful day, enjoy the pictures!

As it’s the  beginning of the month – “rabbit, rabbit” for good luck.

I’m excited to see today’s pictures from Iran. I recently found a few of my mother’s pictures from a trip she took there in 1969. It impressed her greatly, and she loved many things Persian from then on.

With Iran so much in the news these days, I thought sharing some of the many pictures I took there in 2015 would be of interest.

Our two-week trip started in Tehran. We then flew to Kerman, which is in the southeast near the Pakistan-Afghanistan border. We drove from there, tracing the old Silk Road across the desert to Yazd, then heading north to Shiraz and Isfahan. I don’t pretend that two weeks makes me any kind of expert, but I did get to meet and talk with many Iranians, who were without exception, warm and friendly and eager to practice their English with Americans. And I learned a lot about Iranian culture, and the very deep national pride in their more than 2500 years of history.

I’ll go back to the beginning of the trip in Tehran in part 2, but I want to start with two tombs that highlight Iranian history and culture.

This is the tomb of Cyrus the Great at Pasargadae. It stands at the end of a road lined with stalls selling postcards and souvenirs, but apart from a few other small ruins nearby — some broken columns, an ancient fortress — there’s nothing else for miles in any direction except fields of wheat, rolling hills and a few nomadic sheepherders.

The city of Pasargadae was still unfinished when Cyrus died in battle in 529 B.C. His son Cambyses moved the capitol to Susa, and Cambyses’s successor Darius created Persepolis. So it’s been effectively abandoned for millennia, but Cyrus’s tomb somehow remained intact. Even Alexander, who looted and burned Persepolis, left this tomb alone out of respect for Cyrus. 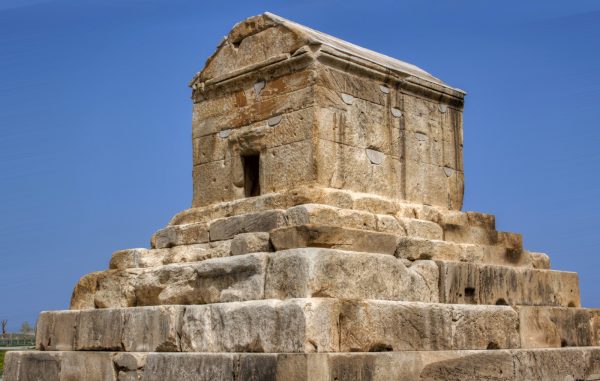 This is the tomb of the Sufi poet Hafez in Shiraz. Iranians say that every home has two books — the Koran, and the poems of Hafez. Our tour leader could recite dozens of poems by heart, and before visiting the tomb, we sat under the trees in the surrounding gardens and ate Shirazi faloodeh — a dessert of frozen noodles doused in rose water and lime juice — and listened to her recite poems in Farsi. 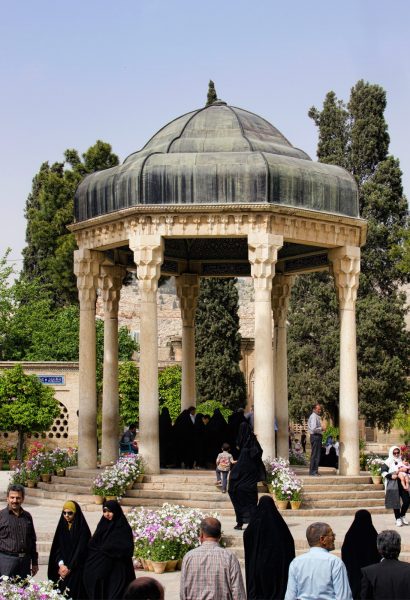 Like all the Sufi poets, Hafez’s poems are full of the ecstasy of love, nature, and wine, so it’s a little surprising to see how revered he is in a country where alcohol is banned. But what was more shocking to an American was the size of the crowds visiting his tomb — busload after busload of people arriving while we were there. It felt like Disneyland on a weekend, and all of these people were coming to visit a tomb! Of a poet! Who died in the 14th century! It’s impossible to imagine Americans having this kind of devotion to a poet, or any artist. 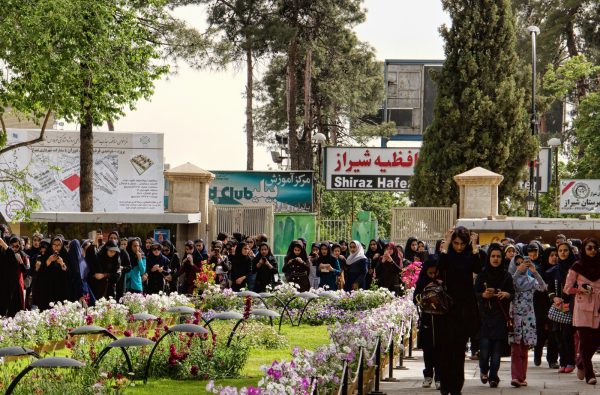 On the other hand, these girls — who got as far away from their families as possible and focused on looking unimpressed and checking their phones — seemed all too familiar. 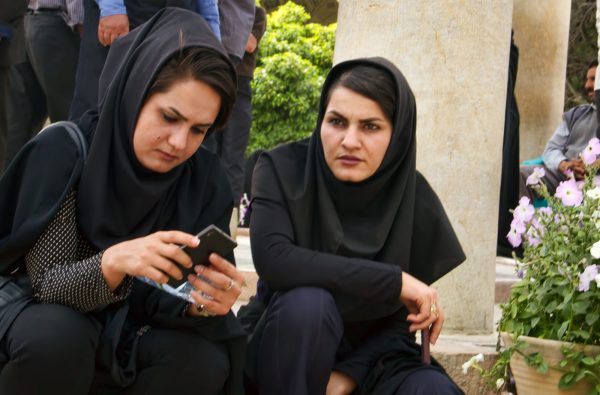 Even the souvenirs for sale are poetry-oriented. For a small fee, these parakeets will select a random verse of Hafez just for you. 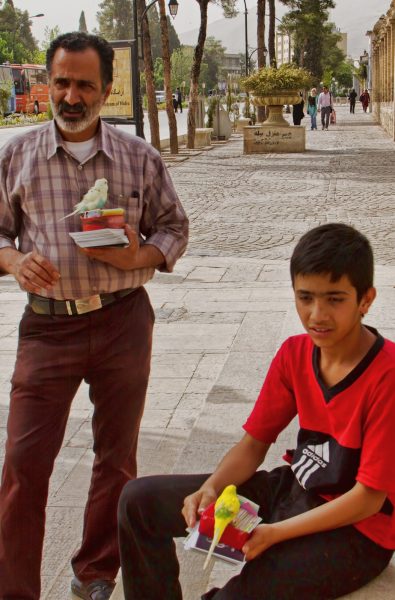 Thank you so much arrieve, do send us more when you can.