So sorry about Monday’s post. I literally fell asleep in bed with my iPad open to the post and woke up Monday morning and pretty much immediately had crazy rain and hungry cats to deal with, so I didn’t give it a second thought until much later in the day.

And then, Monday evening, working on the Tuesday post, all was set and… WTF I KNOW I HIT SCHEDULE but I didn’t sit to watch it save and apparently it didn’t, so I’m pushing what was supposed to have been Monday’s post, then Tuesday’s, to Thursday. Sincere apologies to everyone – this week is just not going well, apparently. Let’s hope my other endeavors are not so-afflicted.

This set of photos is part 1 of a two part set. This submission has shots from a trip to Xyzzx which is on the road to Las Vegas and a return to Joshua Tree.

Anybody from LA who’s driven to Las Vegas has seen the mysterious sign Xyzzx Rd. as you approach Baker, CA. There’s actually a Xyzzx at the southern end of that road. It began as a “heath spa”(it was a sham worthy of a Trump) and was eventually closed down by the Feds. The buildings there are now the Desert Research Center of the Cal State University system(it’s not affiliated with any campus). The Dark Sky Finder web site(https://darksitefinder.com/maps/world.html#4/39.00/-98.00) shows Xyzzx as almost as dark as Amboy Crater and has a small lake, so I wanted to check it out. I also wanted to test out my latest addition to my camera collection, a Samsung Galaxy NX(it’s an Android based camera). Madame and I headed out for what Google Maps said would be a 3 hour trip(2 1/2 hours and change without traffic), the trip ended up taking 4 hours. We arrived just after sunset and as it started to get dark we noticed a haze to the east. That haze was the stars and the band of the Milky Way starting to come into view with the fading sunlight. It was also very windy, so though I’d packed the sky tracker, I didn’t think it’d work with the gusts of wind. I took a couple of test shots with the new(to me) camera and they looked good and then sent one to a fellow photographer since we had cell service(this would come back to haunt me). I took shots next to the lake(fisheye to the east with the new camera and wide angle to the southeast with my NX1).

After I sent my fellow photographer the picture, he wanted to go to Joshua Tree the next day. Madame thought this was madness, but the next afternoon I was driving off to Joshua Tree. As with the trip to Xyzzx, the drive took about 4 hours. We headed into the park and parked at the same place where we’d(my fellow photographer organizes the meetups) shot the Milky Way 2 years ago. I wanted to head there first to get some shots of the sunset. He wanted to shot at Arch Rock, so we took his car there and shot some pics and then shot at another location on the return to our central meeting place and my car.

One of the things I discovered about the Galaxy NX camera is it doesn’t produce RAW and JPG files like my other cameras. So to send the file to my fellow photographer, I had to switch the camera to produce JPG’s. I shot the shot to send him and set it, and then change the camera back to RAW. RAW files capture what the camera’s sensor sees, while JPG’s take that information and alters it with the camera’s white balance, noise reduction and exposure level and then compresses the file. It’s fine for snapshots, but doesn’t work well for shots of the Milky Way. So this shot is not the best, but I decided to include it anyway since it shows a wide view of the area. On the right you see the CSU Desert Research Center(the old spa buildings), moving to the center you can see a small light dome(light on the horizon) the emits from Laughlin, NV(about 85 miles away), and to the left you can see the trail of head lights of I-15 and the bright light dome from Las Vegas(also about 85 miles away).

I noticed that I spelled Zzyzx incorrectly in the Introduction, Zzyzx is the correct spelling. 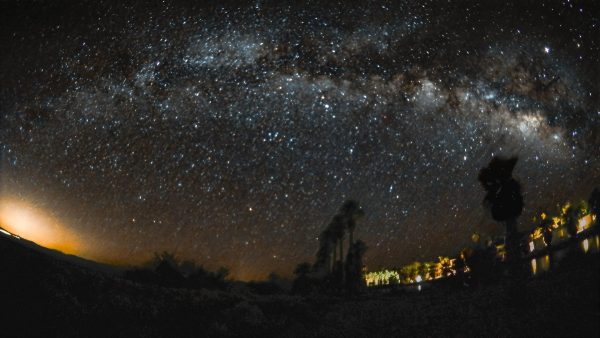 Here you see the galactic center of the Milky Way over the CSU Desert Research Center and Lake Tuendae. Zzyzx is actual on the edge of a dry lake bed(Soda Lake, a different one than the one on the Carizzo Plain) which is actually the terminus of the Mojave River. It’s usually dry, but does fill with water during especially rainy seasons. Lake Tuendae and what were once the therapy pool are fed by the Zzyzx Spring just south of Zzyzx. This was shot with my NX1(40 exposures, 15 seconds, f/2.0, ISO 1600, stacked). 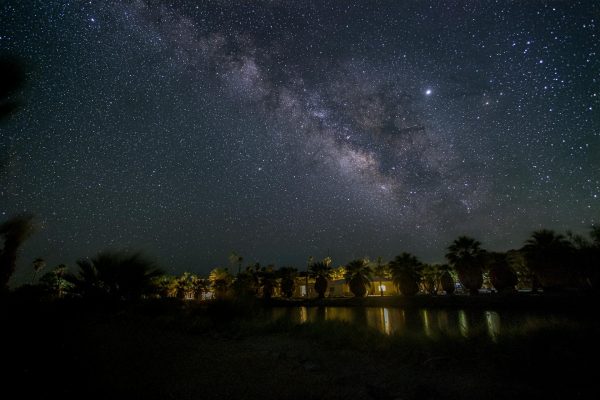 On my first trip to Joshua Tree with the Meetup group 2 years ago, we shot at this location. Before the sun set, several of us headed up the trail and shot pictures of the sunset. I really think this is a great location to shoot the sunset with the two large rocks on either side with a joshua tree forest in the background. I really wanted to re-shoot it since I have better equipment, skills, and tools than I did 2 years ago. 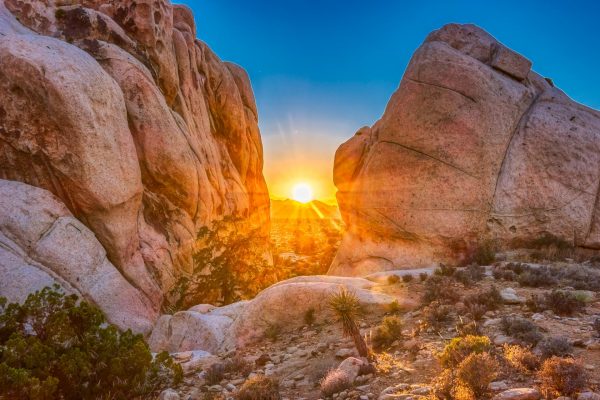 I shot this just after the sun had set and we started heading down to the car. Next it was off to Arch Rock. 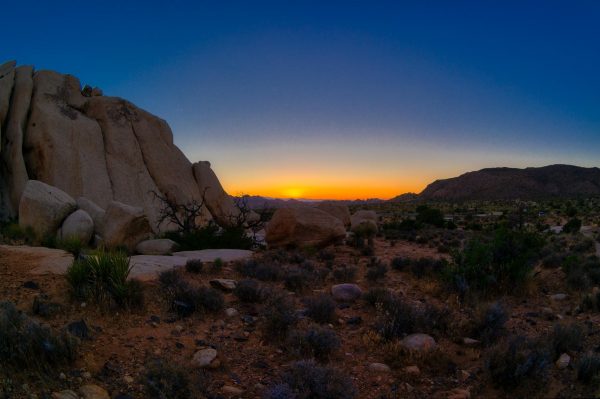 After leaving the Ryan Mountain Trailhead, we took one car to Arch Rock(harder to get separated like we did last month) since parking was limited when we tried to shoot there last month. When we got to the road to the campground/parking the gate was closed. We parked in a wide place on the road and walked in, there was only one other car parked there. Once we arrived at Arch Rock there were a bunch of photographers already up on the ledge by the rock(photographers are like cockroaches, they come out in the dark). We stayed below the ledge and tried to shoot though the arch, but the view wasn’t great and the galactic center wasn’t lined up all that well. I decided to shoot an area just to the north of Arch Rock which I though looked pretty good. This time I remembered to shoot my shots in RAW, with the new(to me) camera. 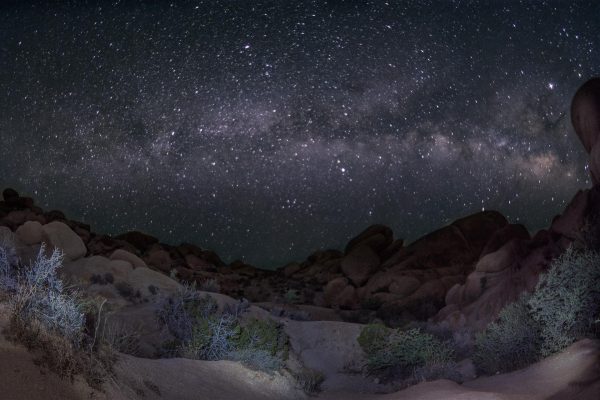