You are here: Home / Science & Technology / Rofer on Nuclear Issues / Speculations On The Nenoksa Explosion

On the morning of Thursday, August 8, something exploded at the Nenoksa Naval Base in Russia, not far from the city of Severodvinsk. This article is a good summary of what we knew by Friday. Since then, the Russian government has said that a radioactive source was involved in the explosion, along with liquid rocket fuel. Reports have gone back and forth on whether radiation detectors in Severodvinsk detected anything. Five more people have been reported dead. Sarov/VNIIEF, one of the Russian nuclear weapons laboratories, has released a statement, which some folks are rushing to translate.

Update: Sarah Bidgood has translated the video. Here’s the start of her thread. No news about what was being done.

For my non-Russian speakers, this video is an official announcement from the leadership of RFNC-VNIIEF regarding the Aug. 8 event at the MOD test site in the Arkhangel’sk oblast’. As we know, 5 people died. 3 have been hospitalized with moderately severe injuries. (1/10) https://t.co/Z71TLFiKyk

Here are some things that we know. Jeffrey Lewis and the OSINT group at MIIS are doing a good job with the small amount of information we have. I mostly agree with them, although I tend to be slightly more conservative in my confidence in the interpretations. They are publishing mainly on Jeffrey’s Twitter feed. Here’s a recent thread.

First, Russia appears to have recently moved SSC-X-9 testing to Nenoksa. In the past year, Russia built a launch area that closely resembles the one removed from Novaya Zemlya with a shelter on rails. (Also, blue shipping containers!) pic.twitter.com/yMCDVFt51t

Third, ROSATOM, the Russian state atomic energy corporation, has now admitted that five of its employees were killed while providing "engineering and technical support of isotopic power sources in a liquid propulsion system."https://t.co/XWJGTwASom

Almost exactly a year ago, when Burevestnik was announced, I wrote up what the United States had done with nuclear rocket and cruise missile engines. I saw the Rover program up close and personal and knew a number of people involved in it. One of the conference rooms I used had an unloaded Rover fuel element to be used as a pointer. Fun.

On Twitter, I’ve been a bit of a naysayer. I’m not disagreeing that Russia is testing what they believe will become their Burevestnik. I’m saying I think they’ll never have an operating system.

I think that what has happened is that someone sold a program to Putin. The visuals are cool, and the idea of a cruise missile that can just keep cruising obviously appealed to him. “Nuclear-powered” sounds good. The promoter of the program may even believe in it.

Programs have been sold this way in the United States. We are still working on the missile defense that Edward Teller bamboozled Ronald Reagan into. I recall a Labor Day weekend in which the proof test for laser isotope separation was to be completed. It wasn’t. People get overenthusiastic about their ideas or just are selling something they think would be fun to work on or to make their status higher.

But there are basic and fundamental engineering considerations that suggest that a nuclear-powered cruise missile with a very small power source, will be very difficult or impossible to build.

All flying machines trade off between power and weight. Nuclear reactors have another couple of tradeoffs, between size and critical mass and between ways to do heat transfer. With the announcement that a radioactive source was involved in Thursday’s explosion, speculation has swung to the many isotopic thermoelectric power sources. But they are not powerful enough for propulsion.

Burevestnik is supposed to be a ramjet, which means that it takes in air, heats it, and rapidly expands it out the back for propulsion. That was how the Tory reactor of Project Pluto worked. The Rover reactor, which was designed to operate outside the atmosphere, used hydrogen as a propellant gas. More details about both in my earlier post.

The reactor heats the propellant gas. That requires a fair bit of area between the heat source (reactor) and the gas. Tory and Rover accomplished this by having fuel elements with holes through them, aligned so that the gas could come in one end and go out the other. The gas went through the reactor.

The reactor could be small and transfer heat to the gas via a heat exchanger, possibly two heat exchangers. Jeffrey Lewis sent me a patent from 1979 (actually 1965, but declassified in 1979) that describes such a system. I doubt that this system was ever built, although there are some tantalizing details that suggest that some parts of building it were looked into. However, not much is said about the heat exchangers, nor the fluid that would be used in them. Since the patent is for a fast reactor, it is tempting to believe that the primary heat exchange fluid would be sodium.

When you are concerned about weight, as a cruise missile designer must be, the places to look in these designs would be the moderator and reflector for the reactor. Highly (above 90%) enriched uranium is the only possible fuel; plutonium is too hard to handle, and lesser enrichments add too much weight. The moderators in the Tory and Rover reactors also served as structural elements.

Some of the smaller reactors now being developed for space applications have been suggested, like the KiloPower reactor. But, like the isotopic thermoelectric sources, these small reactors are for electrical power generation. They must be bigger, and therefore heavier, to provide the power necessary for propulsion.

The Tory and Rover reactors, in their containers with subsidiary equipment, were around ten feet long and 3-4 feet in diameter. The 1979 patent doesn’t give dimensions, but they would likely be similar. That’s small for a reactor, but larger than photos of the Burevestnik suggest. Here’s one for comparison. 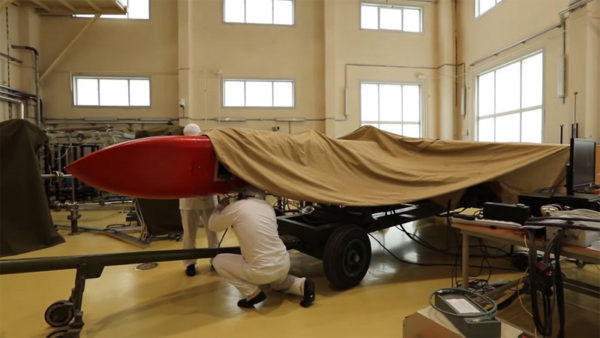 Both liquid propellant and a radioactive source are mentioned in Russian government press releases. It is not clear how these come together for cruise missile propulsion. A nuclear reactor could not get a cruise missile off the ground, and a chemical engine would be needed for starting (more weight), but solid fuel was previously mentioned for Burevestnik. This is where we might go back to the possibility of a sodium coolant.

What if the Russians found a big breakthrough? I’ve been thinking about this for a year or more, and I can’t come up with anything that makes sense. I don’t see a way around the constraints – heat transfer requirements, critical mass – and nobody has suggested one.