You are here: Home / Anderson On Health Insurance / Gold is going the distance, going for speed

Gold plans in the ACA are higher actuarial value plans than non-CSR silver and all bronze plans. The benefit design should be better for people with high costs. The trade-off is that these plans have higher premiums. More protection for higher monthly premiums is a standard trade-off. But this is not always true.

As part of a series of productively procrastinating steps I had taken when I should have been writing a grant this week, I was thinking about risk adjustment under silverloading.  That led me to wonder how many gold plans have a maximum out of pocket limit equal to the maximum allowable limit?  I used Healthcare.gov public use files for 2019 to estimate the percentage of 14 digit Plan IDs at each metal level had a maximum out of pocket limit equal to the 2019 maximum allowed out of pocket costs of $7,900 for a single individual.  In order to get a quick and dirty sense of scope, the unit of analysis is county/plan ID combination for both the denominator and numerator.  If I was publishing this in a peer review space, I would have done some type of weighting scheme. 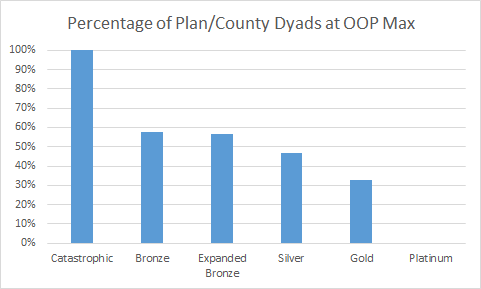 There are a couple of things going on here.  The big thing is a combination of distance  (total claims spend) and speed of reaching the out of pocket max varies by metal tier.

Catastrophic and Bronze plans quickly hit the maximum allowable limit over a short distance of claims.  Catastrophic plans can cap out after only $7,900 in allowed claims or the first half an hour of a moderately complex surgery.

Gold plans aren’t going for speed but they are going the distance, all alone in a time of need.  Let’s take Wyoming Blue plan # 11269WY0070013 to illustrate what is happening.

It has a $1,000 deductible and a $7,900 out of pocket limit.  So for the first thousand dollars, the Gold plan acts the same as a Catastrophic plan.  However after that it kinks.  Most of the cost sharing is a simple 20% coinsurance for the next $34,500 in claims.  At that point, the plan is capped out.  There is some wiggle room in these numbers are there are straight co-pays for some drugs and a copay plus coinsurance design for PCP so the cap-out claim distance is likely to be a little less than $35,500 under the simplest scenario.  In this plan, someone does not hit the out of pocket maximum until they have done two things in the same claim year: had a knee replacement and given birth without any complications at average cost facilities.

Gold premiums are always higher than bronze and catastrophic premiums when we control for insurer and network.  Gold premiums are about the same as silver with local variation due to the quirks of silverloading and induced demand factors.  Gold can be attractive to folks who anticipate medium medical needs over the course of a year.  People who know that they are going to hit the out of pocket maximum without having to look at a benefit design probably should not be in gold, but that is a small percentage of buyers.  Gold has a margin of superiority over plans with the same out of pocket maximum that is a function of how fast people get to a certain level of claims and how far that level of claims is from zero.