You are here: Home / Economics / C.R.E.A.M. / Remember, remember the fifth of November

If you’ve got local elections this fall, don’t forget to vote. And if you’ve got time, get involved. We’ve got a big one coming up here — a county exec raise the Dems have a real chance of winning. If we do it will be the first time in over 30 years. That’s the Trump effect, my friends. This November’s locals are important nationally in a way that most local elections are not. If Republicans take enough of a beating in November, it’s going to be that much tougher for them to keep clapping for Dear Leader.

The most high profile state elections are Virginia. The numbers look great for Democrats right now.

Voters prefer that Democrats control the General Assembly after the election, 53% to 37%, powered by a 17-point advantage among Independents.

Give here to the Balloon Juice Virginia Democratic Legislative Caucus Fund. I upped the goal to 8K. This blog has become a fundraising powerhouse, we’ve raised 535K since August 2016. And I think for the most part we’ve given wisely. Thanks a lot to everyone. 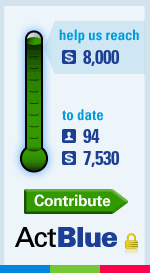