You are here: Home / Anderson On Health Insurance / Georgia is trying to operationalize Cruz Amendment

Georgia has prepared a complex 1332 waiver for their individual market.  It has two parts.

The first part is a reinsurance waiver that varies the pay-out by county and degree of rurality.  The objective is to bring down premiums for unsubsidized buyers.  This part of the waiver would go into effect for January 1, 2021. 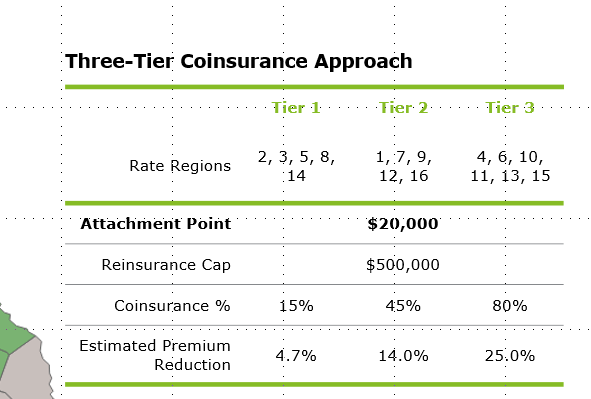 The other part of the waiver is an attempt to operationalize Ted Cruz’s amendment during Repeal and Replace.

Here is how Vox described the Cruz Amendment:

If an insurance company offers at least one plan in the state that is compliant with the (Obamacare) mandates, that company can also sell any additional plan that consumers desire.

What that does is it maintains the existing protections, but it gives consumers additional new options above and beyond of what they can purchase today….

That is true. But outside experts argued that the costs to the federal government could be unsustainable. As the Obamacare markets turned into high-risk pools, premiums would increase, driving the cost of the tax subsidies higher and higher.

“Keeping the ACA tax credits would, in theory, protect subsidized consumers,” Larry Levitt, senior vice president at the Kaiser Family Foundation, told me. “But the cost of those tax credits would quickly skyrocket, because healthy people would flock to non-complaint plans, which could cherry pick them with inexpensive premiums.”

Cruz acknowledged that his plan would depend on taxpayer subsidization of people with high medical costs. But, he argued, it was better for the federal government to pick up the tab than requiring health plans to charge sick people and healthy people the same premiums, increasing costs for the latter.

The second stage of the Georgia 1332 proposal would do a few things.

The critical thing from a legal standpoint is the last point: the state is bringing in a lot of new money so that the seriously ill won’t be worse off if they purchase the benchmark silver plan which will be more than sufficient to meet guardrails.

The concept of operations is that insurers will offer a limited portfolio of full benefit plans and a bunch of much cheaper limited benefit plans.

ACA plans are required to offer 10 Essential Health Benefits (EHB). Milliman has a good graph that shows where the money is spent on EHBs: 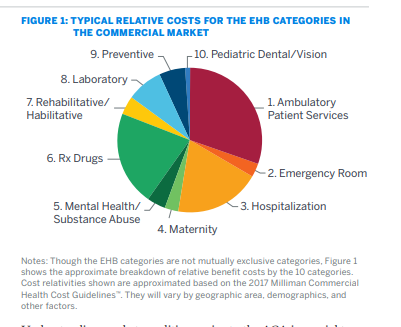 I could easily see most insurers offer limited benefit plans that exclude maternity, pediatric dental/vision, and most of the preventive care benefits whose pay-out period is more than a year.  More complex plans would have those exclusions plus limits on prescription drugs such as not paying for hepatitis-C drugs which is worth several dollars per member per month in premiums.  Anyone who had any reasonable risk of needing the excluded services will go to the full benefit plans.

This is a way to convert the ACA individual market into a fairly well funded high cost/high risk pool.  The low cost/low risk will self-underwrite to the subsidized limited benefit plans while the sick will overwhelmingly select the full benefit plans that have the same subsidy schedule for 100% to 400% FPL.  The sick or high risk to be sick and expensive who earn over 400% FPL will truly be SOL under this scheme.

The legal vulnerability is that the state of Georgia is placing a cap on total 1332 spending of about a quarter billion dollars a year for both extra subsidies and reinsurance.  Subsidy disbursement will be capped.  If there is significant take-up of plans, people will be signing up late and not receiving assistance.  Furthermore, if the morbidity profiles are worse than the state assumes, there will be obligations that are just being abandoned.

I’ve long thought that a variant of this idea makes a lot of sense.  The one major change for a fix it and forget it policy would be to lift the subsidy cap from 400% FPL.  California has done this to a limited degree to 600% FPL but opening up the subsidy schedule so that no one pays more than 10% of their income for a benchmark plan would get rid of the problem of a family of four paying $30,000 or $40,000 for coverage if they are old enough.

On The Road – Mike in Oly – Tucannon River, WA
Next Post: Bullock Out »