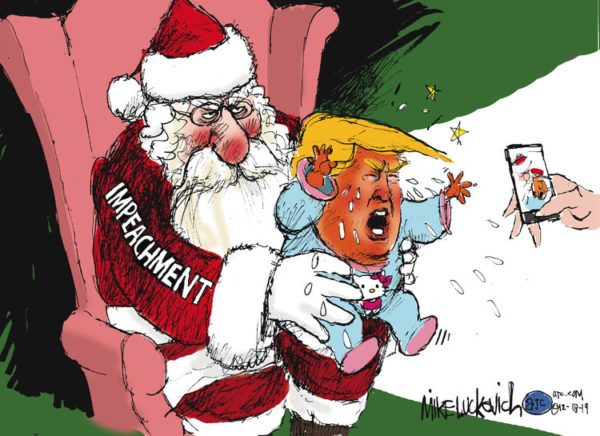 NEWS: @SpeakerPelosi says she will not name impeachment managers until she sees what the process will be in the Senate. “So far we have not seen anything that looks fair to us,” she said. Articles will not be sent to the Senate until she names the managers to present the trial. pic.twitter.com/aT8R3qrHzy

Per a very thorough explainer in the Washington Post, paper of record in the town whose monopoly industry is politics:

… The Constitution only says that the Senate has to hold a trial, with the senators sitting as jurors, House lawmakers serving as prosecutors known as managers, and the chief justice of the United States presiding over it. Senators must take a public vote, and two-thirds of those present must agree on whether to convict the president and thus remove him from office. But the Constitution doesn’t lay out exactly how to hold a trial.

Rules the Senate approved in the 1980s give some guidelines, but the really important stuff — such as whether to call witnesses and what kind of evidence to admit and how long to make it — is up to the senators themselves to decide. The only modern guide we have is the Clinton impeachment trial, which allowed no new evidence and only taped witness testimony of key witnesses. It was largely considered a successful example of bipartisan cooperation, as Republicans worked with Democrats to put together as fair a trial as possible.

A majority of senators need to agree on the rules for Trump’s impeachment trial. Senate Majority Leader Mitch McConnell (R-Ky.) and Senate Minority Leader Charles E. Schumer (D-N.Y.) will probably try to come to a compromise beforehand on what witnesses to call to avoid a big, dramatic battle during the trial. But they have vastly different views on how to do this. Schumer has said he wants people close to the president during the period scrutinized in the impeachment inquiry, such as Trump’s acting chief of staff, Mick Mulvaney, or former national security adviser John Bolton, to testify. The Washington Post has reported McConnell wants no witnesses at all. Republicans are also feeling pressured by Trump, who appears ready to use the Senate trial to attack his political opponents and try to undermine his impeachment…

Minutes after the vote, House Speaker Nancy Pelosi (D-Calif.) told reporters she wouldn’t be naming House managers until she saw the parameters of the Senate trial and was assured it was fair, strongly suggesting that she believes a fair trial includes witnesses.

Assuming they get the articles without delay, senators will come to an agreement on a start date for a trial. We expect that will be in January. Senators will start by taking an oath of impartiality and will work six days a week until they’ve voted on both articles of impeachment. If there are witnesses, senators can ask them questions in writing, which the presiding official, Chief Justice John G. Roberts Jr., will read out loud. The president can choose his own lawyers, and they can cross-examine witnesses. The chief justice can overrule something that happens in the trial that he feels is out of line with the rules, but senators can overrule him with a vote.

If Trump is convicted on even one count, the Constitution says he has to be removed from office. Senators could take yet another vote to prevent him from running for office ever again…

If @SpeakerPelosi is indicating she will hold the articles until McConnell guarantees a trial with witnesses, she's probably looking at this:

Also, even Rooney, who voted AGAINST impeachment says they should testify.

She is doing precisely as some of us suggested: Using what leverage she has to pressure the Senate to adopt fair rules. She did not say she absolutely would send over the articles. If she does not Trump is never acquitted.

BTW, if any of you “Dems will never impeach/Dems do everything wrong” people are reading this, psst…Nancy Pelosi is good at tactics & strategy.

And @Lawrence just made a bigger point: it was Americans who made Nancy Pelosi Speaker. If you think Dems are incompetent , weak, & corrupt, you’re really saying you think the millions of us who canvassed, called, donated, & voted are suckers.

We’re not the suckers.