Jesus H.'s to-do list:
* Sneak into Mary's uterus, all stealthy-like (check)
* Bread/fishes for all the bros (check)
* Get crucified for the sins of man (check – harsh!)
* Think up a purpose for John Delaney (next Monday)
* Help the most devout team win the Super Bowl (ASAP!) https://t.co/RzelkTZKla

Pointing & mocking is the only reasonable conclusion. Ed Kilgore, at NYMag, “Delaney Was First In, and Now Is Finally Out”:

Every presidential election cycle, there are vanity candidates: pols or wealthy business people who have the determination, the resources, the ego to persist in the difficult task of running for president despite abundant signs that it’s not working. Many observers accuse 2020 candidates Michael Bloomberg and Tom Steyer of running that kind of campaign, wasting tens and even hundreds of millions of dollars better spent on promoting the Democratic Party or down-ballot candidates.

But before either of these men got into the fray, there was another wealthy candidate who launched a presidential campaign long before anyone else, made a brief but not necessarily positive mark on the contest, and then hung in through thick and mostly through thin before abruptly leaving the race just three days before the Iowa caucuses: former Maryland congressman John Delaney.

A three-term congressman from a gerrymandered district running from the D.C. suburbs into western Maryland, and before that a successful (and largely self-made) banker, Delaney emulated another Marylander, 2016 candidate Martin O’Malley, in following the “book” by getting into the race early and focusing obsessively on Iowa. Indeed, nobody was going to beat Delaney to the starting post: He announced his candidacy on July 28, 2017. Unlike O’Malley, Delaney was rich enough to self-fund (loaning over $20 million to his campaign), and by declining to run for reelection in 2018, he was able to run full-time. By the end of 2018, he had completed the so-called “full Grassley,” with appearances in all 99 Iowa counties, a feat many presidential candidates never accomplish. By the autumn of 2019, he had spent a total of 80 days in the state, holding 229 events. From the get-go, he identified himself as a member of the moderate, “pragmatic” wing of his party. But his early start didn’t do much for him in terms of early popularity…

From the Cosplay Socialists — d/b/a ‘dirtbag leftists’ — pushing their own vanity candidate:

This was probably the last question John Delaney was asked at the end of his two year plus presidential campaign pic.twitter.com/lddY3cq4h5

At least Delaney wasn’t being propped up by the Russians and the Republicans. Assuming there’s a difference between those two groups any longer.

END_OF_DOCUMENT_TOKEN_TO_BE_REPLACED

Lamar Alexander has spoken in more detail of his decision to vote against calling impeachment witnesses and, presumably, to acquit Donald Trump.

“The Senate reflects the country, and the country is as divided as it has been for a long time. For the Senate to tear up the ballots in this election and say President Trump couldn’t be on it, the country probably wouldn’t accept that. It would just pour gasoline on cultural fires that are burning out there.”

So many assumptions in those three sentences.

A great many people can’t be on the ballots for the election. Not having enough money is one of the prime causes. Being under 35. Having been held back by color or gender so that the opportunity never arose. The country accepts all of those. But here is a man who has, as Alexander admits, badly abused his position as President already. Perhaps, yes, we should not allow him to do that again.

But Alexander makes such a decision sound arbitrary, as Trump supporters do. And he says it in a way that conflates the fallacious idea that impeachment is not firing for cause, but rather nullification of the election.

As to pouring gasoline on cultural fires, Alexander obviously hasn’t checked his name and variants trending on Twitter. It is only one sort of cultural fire that he is concerned with.

Alexander denies that Trump’s shaking down of Volodymyr Zelinsky qualifies as “treason, bribery, or a high crime and misdemeanor” as specified for impeachment in the Constitution. But soliciting something of value for money is indeed bribery in the general meaning of the term, inviting foreign influence into an American election is a crime, and it is hard to see how any of this is not a misuse of Presidential power. Unless you’re Lamar Alexander.

The article mentions Alexander’s admiration for Howard Baker, who conducted himself with dignity and honor through impeachment hearings for Richard Nixon. There is neither honor nor dignity in Alexander’s abasing himself to fit the Trumpian mold.

“Whatever you think of his behavior,” Mr. Alexander said of Mr. Trump, “with the terrific economy, with conservative judges, with fewer regulations, you add in there an inappropriate call with the president of Ukraine, and you decide if your prefer him or Elizabeth Warren.”

END_OF_DOCUMENT_TOKEN_TO_BE_REPLACED

Let’s step back a bit and take stock of what has happened today. First and foremost a battle was won. Specifically that there will be no vote tonight, in fact there will be no vote until Wednesday, on the final disposition of the impeachment of the President. While I’m sure this seems like cold comfort to some, it is a win. When faced with an opponent whose capabilities overwhelm your own, when facing a situation where you are at an asymmetric disadvantage, a key strategy is to play for time. The inability of Senator McConnell to call for a vote to dismiss the impeachment charges against the President this evening creates time. While it doesn’t create time for Senator Schumer to move, it creates time for other events to occur.

Between now and Monday morning when closing arguments begin, let alone Wednesday when the vote to dismiss is currently scheduled to be taken, a lot of events can occur. Ambassador Bolton can continue to leak out and tease what he knows. If he was smart, given that his information’s shelf life is now set to expire on Wednesday, he’d get himself booked on all the Sunday AM news talk shows and get his story out. Because if he doesn’t take advantage of this opportunity, it will close and he will then face whatever consequences the President and his closest advisors have cooked up for him.

Between now and Monday morning when closing arguments begin, let alone Wednesday when the vote to dismiss is currently scheduled to be taken, Joseph Bondy, on behalf of his client Lev Parnas can leak more audio and video and documents that further implicate the President, the Vice President, the Acting Chief of Staff, the Secretary of State, the White House Counsel, the Attorney General, the President’s private attorney Rudy Giuliani, Senator Graham (R-Fainting Couch), Congressman Nunes (R-Mooooooo), his staffer Derek Harvey, and several others. If Bondy was smart, and he is, he’s right now in discussion with the Sunday AM news talk shows to get at least some of this material out. His letter this afternoon to Senator McConnell, which seems to have caused Senator McConnell some dyspepsia, laid down this marker.

Below is the letter Stephanie Schuman @LeafLegal and I sent to Senator McConnell earlier today, (202) 224-2541, summarizing the testimony Lev Parnas would be able to provide, were he called as a witness. #LetLevSpeak #AmericansDemandWitnesses #CallTheWitnesses #LetBoltonTestify pic.twitter.com/WPn7ppz2rG 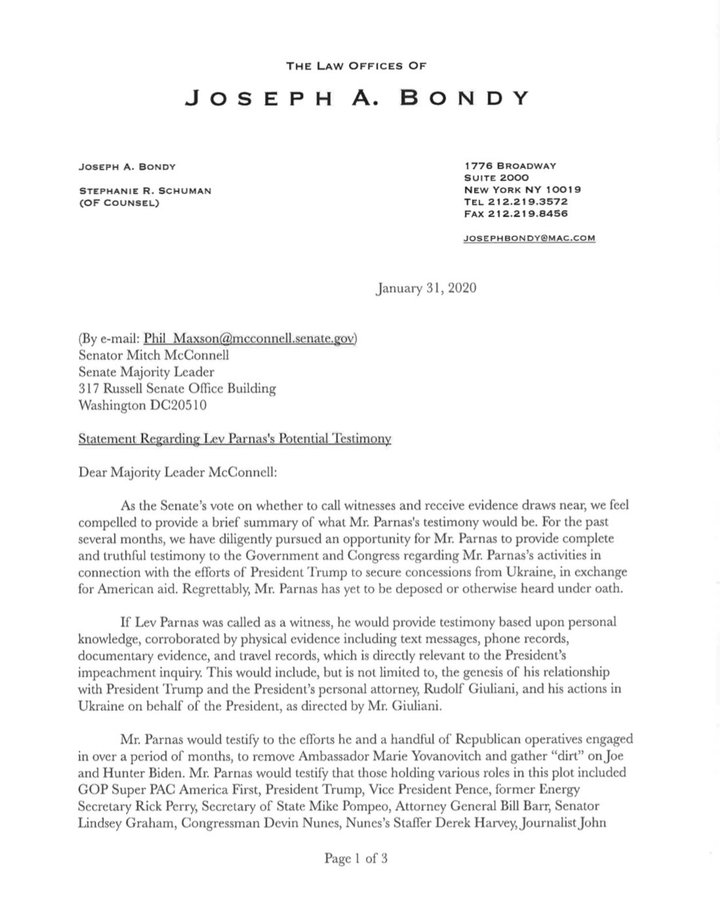 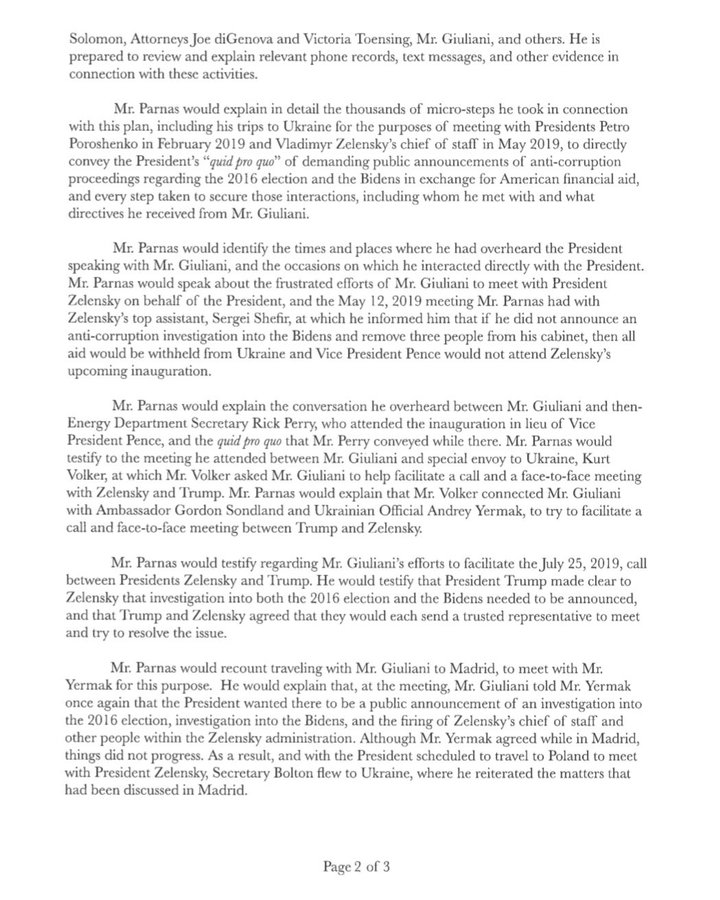 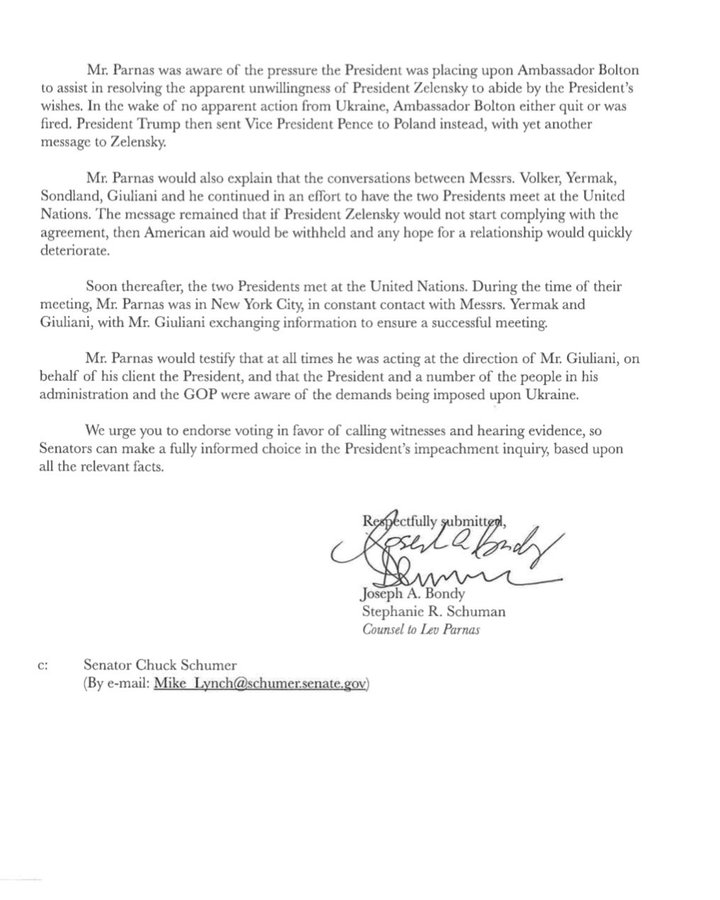 Right now, because Senator McConnell’s plan failed, there is an opening, an opportunity. Senator Schumer and his minority Democratic caucus may not have the votes to ultimately stop Senator McConnell. Speaker Pelosi and her lead impeachment manager Congressman Schiff may not be able to force the GOP majority Senate to do anything. But Congressman Schiff has proven to be an effective strategist in his management of this process. As has Speaker Pelosi. And Senator Schumer has done his part. So take a step back, look at the bigger picture, and recognize that today’s small victory provides opportunities for future ones. Both in the short term of the next five days and the longer term.

END_OF_DOCUMENT_TOKEN_TO_BE_REPLACED

Someone worked their magic on Wikipedia:

Link if you can’t see the photo well here

At about the same time the GOP was flushing their party and the Constitution down the toilet, Great Britain was working to put a strike-through on the part.

BREAKING: The United Kingdom has left the European Union.

Weird, sad day. We must do everything in our power to make them pay in November.

END_OF_DOCUMENT_TOKEN_TO_BE_REPLACED

You guys need a break. It’s far too easy to keep obsessing about what’s going on. Frankly, there’s not much you can do besides educate yourself, get others to know what’s happening and text your Senators via ResistBot to remind them there’s a little thing called rule of law and it doesn’t give a damn about whether there’s a republican or a democrat breaking it. Here’s a nice, soothing open thread for you. Enjoy these pictures of random things I’ve photographed. Show off your talents with some nice calm photos.

Oh, before I go. Obligatory cat pic. Plus a verse. And let us not be weary in well doing: for in due season we shall reap, if we faint not. As we have therefore opportunity, let us do good unto all. As in, this is a long haul thing, don’t wear yourself out. So sayeth the Lord.

END_OF_DOCUMENT_TOKEN_TO_BE_REPLACED

Here’s her full statement on why she won’t vote for witnesses, but the tl;dr is some nonsense about the trial being too politicized, she’s tearful about how John Roberts has been attacked, etc. Don’t waste your beautiful minds trying to make sense of it. Some words had to be formed into sentences, those sentences formed into paragraphs, all in the form of statement, to keep her sinecure intact.

The only thing left is to take this vote and hammer away at all the senators who were part of it. It’s Democrats’ turn to wrap ourselves in the flag, quote the Constitution, and amp up the traitor rhetoric that Republicans love to use at every convenient occasion.

Also, I realize I’m really leaning on this song but I’m not aware of any better expression of the absurdity of the feigned outrage that we’ve been seeing.

END_OF_DOCUMENT_TOKEN_TO_BE_REPLACED

If you have any romantic inclinations whatsoever — and can deal with reading (very well done!) subtitles — it’s definitely worth going to see Weathering with You on a big screen.

The title is… well, I’m sure the production company did their best. According to the Spousal Unit, the original Japanese Tenki no Ko is literally ‘Heaven’s Energy’ (ten) with ‘suffix attached to girls’ names’ (ko). I’d have gone with something like Finding the Rain Maiden, but perhaps you’d need to have seen the film already for that to make sense.

***********
This was one of the trailers at the showing, and I’m looking forward to it, because I have a weakness for fox demons…

Unfortunately, that won’t happen immediately — it was due for release in China this week, but (quite sensibly!) Chinese authorities have shut down all new releases due to the coronavirus outbreak.