You are here: Home / Economics / Free Markets Solve Everything / Justice Done? Or Derided?

A verdict came down yesterday for execs at Insys Therapeutics for their roles in a scheme that–the prosecution argued–poured gasoline on the opioid crisis fire:

I believe we wildly overincarcerate. I don’t thing the US prison system is effective at pretty much anything but serving as a kind of low-rent industrial policy for deindustrialized rural and exurban zones. I don’t generally argue that anyone should be left to rot simply to satisfy my sense of balancing the cosmic scales of justice.

John Kapoor, 76, the former chairman of Insys Therapeutics, was sentenced in Boston’s federal court after a jury found him guilty of racketeering conspiracy last May. The 10-week trial revealed sensational details about the company’s marketing tactics, including testimony that a sales executive once gave a lap dance to a doctor the company was wooing. Kapoor was also ordered to pay a $250,000 fine.

Kapoor was preceded into his conviction by four other Insys employees, along with three more who pled out and testified.  Kapoor earned the most prison time of the bunch, five and a half years, while his underlings face shorter terms, from one to almost three years behind bars. 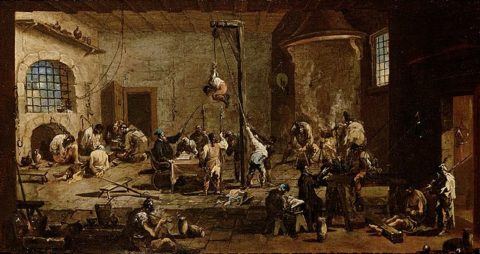 But we inhabit in the America that actually exists, not the one we’re trying to build, and in these United States, prison is exemplary…and lots of folks who didn’t eat in the executive dining room end up serving much more for crimes–even violent ones–that on the face of them would seem much less heinous than this:

Kapoor and others were accused of paying millions of dollars in bribes to doctors across the United States to prescribe the company’s highly addictive oral fentanyl spray, known as Subsys. The bribes were paid in the form of fees for sham speaking engagements that were billed as educational opportunities for other doctors…

During his trial, jurors heard from former employees who testified that Insys made a habit of hiring attractive women as representatives to boost sales of the drug. One former sales representative testified that a regional sales manager once gave a lap dance at a Chicago nightclub to a doctor Insys was pushing to write more prescriptions.

Jurors also were shown a rap video in which Insys employees danced and rapped around a person dressed as a giant bottle of the fentanyl spray. Prosecutors said the video was shown at a national sales meeting in 2015 and was intended to motivate representatives to push Subsys to doctors.

Lots of misery flows from such “hijinks.”

So. What do you think: is a year or five in the slammer appropriate for a drug pushing scheme that was national in scope and almost certain led to the suffering and death of a lot of people whose names we will likely never know?

Hell. I know where I come down.

If nothing else, given that corporations — they’re people, remember! — can’t go to jail in toto, and that I suspect executives are among the groups most likely to be deterred by the credible threat of hard time, this is a missed opportunity to put some muscle behind the notion of the rule of law.