You are here: Home / Open Threads / Here’s a Nice Diversion

Just a reminder that there really is not much you can do to control what is going on around you. There just isn’t. So basically, my advice to everyone is to wash your hands a lot, avoid large crowds, and don’t look at your 401k if you have one. Try to focus on the things you can do- like working to elect local Democrats, being good to the people around you, and focusing on the things that make your life and those around you better. Personally, I spent a couple hours yesterday getting my seedlings started (the first run- I will start a second bunch in 2-3 weeks). The world is not ending, so just keep on keeping on.

Speaking of moving on, I have mentioned that I play World of Warcraft a bunch of times. I am playing Classic, which is basically a reboot of the version that was out in 2004-2006 before expansions, and I am playing with the same core of people I played with back then. About 15 of us stayed in touch through the years, and we got the band back together and merged with a couple of other guilds in similar situations. My parents don’t understand this, of course “You play with 40 people online every Tuesday and Thursday,” to which I respond- “Yes. Think of it as book club or bridge club, but believe it or not, dorkier.” I mean, it’s basically like any online community, much like here- we may not meet in person, but we are a community and we know each other and establish lifelong friendships.

Two of the members of the guild back then were only 14- one a young lady and one a young fellow. We stayed in touch with them, and it was fun watching them become adults. Both are 28 and 29, and the olds in the guild all are very happy with how our children turned out.

Why am I telling you all this? Well, long story short, one of the “kids,” who plays by the name of Lyn, lost her dog two weeks ago to an aggressive cancer. She got Ollie, a border collie/lab mix, right before I got Lily, and she just loved him to bits. He died from an extremely aggressive cancer that went from diagnosis to death. It was horrible. I did feel fortunate that I had gone through a cancer diagnosis with Lily, as I was able to help talk her through some of the tests, what to expect, what she can do, etc., but that is cold comfort when faced with what is just an awful situation.

After Ollie died, I was hopeful she would quickly adopt, but I did not want to push her. I had a feeling, though, that she would be like me and Tunch and it would only be a matter of days before she was out finding her Steve. And I was right!

This weekend she met and picked up a 2-3 year old rescue named Hazel (OMG I JUST LOVE LOVE LOVE THIS NAME) who had been adopted out and returned twice, and I am pleased to report there will not be a third return, as Hazel is a VERY GOOD DOG. And a looker to boot:

Isn’t she just fabulous? I am so happy for her, and I guess it is a good message for us all in these dark times. It may seem like everything is going or has gone to hell, but life will go on, with or without you. You can only control whether you decide to focus on the positive and be part of the good, or dwell on the bad and give up. I would urge you to do the former, and focus on the things that really matter.

BTW- speaking of very good dogs, here is Lily, sleeping on a pile of clothes on the chair behind me, two years from her March 2018 cancer diagnosis: 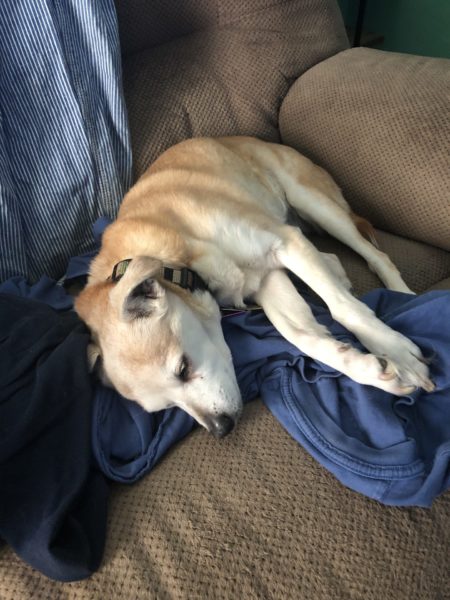 I will never forget how you all, unsolicited, sent me a ton of money to cover her initial hospital visits and gave me the financial ability to get through the initial sticker shock of 18 months of chemo bills and basically saved my dogs life.