I’ve got a bunch of depressing items in the queue to blog here, but this is the time of evening (after dark, before [ETA: most of the] primary results) when we can do a little community.

So let’s go back to one of the blog’s core fixations: eating well by our own hands. I don’t know about all of youse, but the shelter-in-place regimen makes me want to cook, every day, in quantities that soon run into tribble-esque storage problems.  So, kind of at random, I’m going to share some of what I’ve been doing lately, and y’all can fill in the comments with either your zombie apocalypse g0-tos or anything else, for that matter. 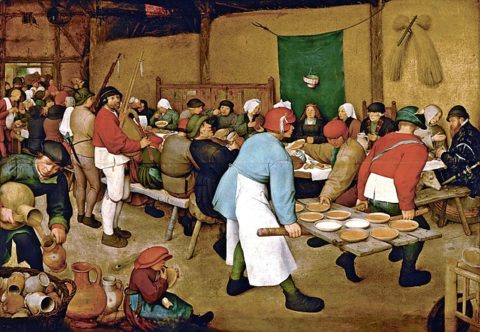 First up: a steak sauce I invented out of the fridge a while back that is just…really nice:

For one big rib steak (i.e., dinner for two): put a healthy glug of olive oil, four or five tablespoons in your smallest saucepan.  Chop up a lot of garlic (two or three big cloves) and poach them in the oil with a pinch of salt–bring ’em to a bare simmer and then keep the heat pegged as low as it can go. While that’s mellowing, chop up three or so papadew peppers (again fine), and peel off a good sized piece of lemon rind. Toss both of those in the pan, raise the heat enough to bring it back up to a bare simmer, and then adjust the temp to keep it there. Chop up a couple of scallions — the white part and an inch or so of the green–again, to a fine mince. Add a generous teaspoon of prepared horseradish, a rounded teaspoon of good mustard, and toss in the scallions. Cook till the scallions wilt and lose their raw bite. Taste, add salt and pepper as needed, and if you want a hint of sweetness, throw in a bit of syrup, and cook for another minute.

Sounds weird, I know, and I’m sorry about the quantities–but that’s as precise as I’ve ever known it.  It’s really a great steak dipping sauce (and bizarrely is not bad as a late night jolt on pasta). 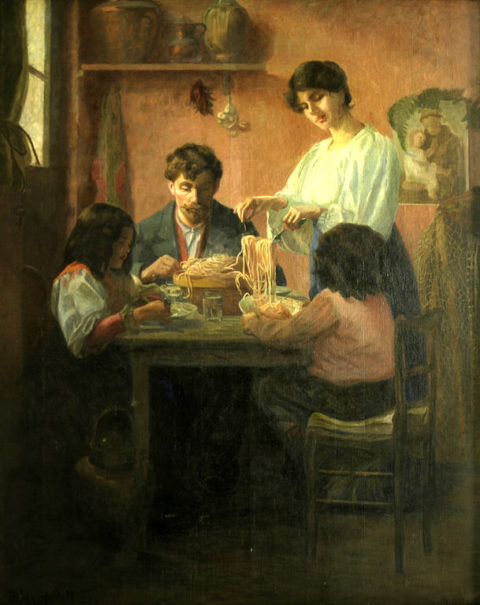 Next up, and speaking of pasta:  I can really recommend this Amanda Hesser recipe for a really lovely pasta sauce. For religious heritage reasons, I don’t cook with pork in my own kitchen (my kashrut is notional, but childhood habits die hard), so I substitute my local Whole Foods lamb kofta–they sell it as either seasoned ground meat or patties–along with the 1 lb bricks of ground veal they were regularly stocking before our current hordeapalooza.  My only real variation is to add a couple of teaspoons of freshly ground fennel seed and a little bit of Ricard pastis–any anise flavored digestif will do–added with the wine.  This brings out the astringent edge of the fennel really nicely (and can even make up for those times you start to make this and realize you don’t have any fresh fennel). That, and I use good linguine or fettucine, because I don’t really like penne that much…but YMMV.

I’ll save a couple of other recent pleasures for later posts, but one more for now, because, as you may remember, I believe that roast chicken is the one plausible piece of evidence that the FSM exists and loves us.

Long ago, I filmed Michael Romano, chef (then) of the Union Square Cafe in New York. He was a lovely man, and his job that day was to cook up an analogy to the way galaxies cook stars into greater and greater concentrations of metals. Neil deGrasse Tyson played his sidekick, and you can see the scene here, starting at about 42 minutes in. 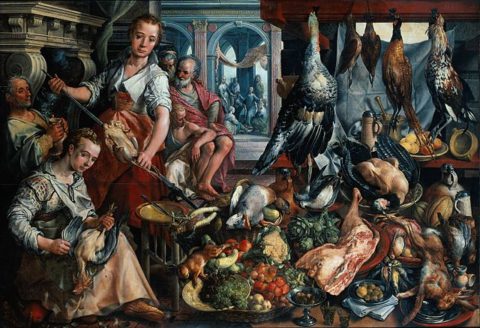 All that is prelude to the fact that doing that shoot got me a copy of Michael’s Union Square Cookbook–which has mostly sat on my kitchen shelf for the last many years. Recently, though, I’ve started to poke around in it, and I came across his mom’s baked chicken dish, which, slightly modified, has become a crave-inducing star of the rotation in our house.

The recipe as written calls for a 3.5 lb chicken cut into pieces. My wife and I both prefer dark meat, so we just went with thighs alone the first time. Here’s how it goes:

salt and pepper the chicken pieces.

Get out 8 thyme sprigs

Slice one and a bit lemons thinly — you’ll want about ten good rounds–and reserve the rest of the second lemon for juice.

Preheat the oven to 400 degrees.

Dredge the chicken in flour and then brown them in olive oil in an ovenproof skillet or Dutch oven. When they’re done, put them aside.

The recipe says you should throw out the fat and add more olive oil. My bubbe would have scolded me for that, so I just drain enough of the rendered fat-oil mix so that my cardiologist doesn’t shout at me.  Toss in the onions and cook over medium-low heat until they’re soft, adding the garlic when you feel like it. This takes about fifteen minutes, or more if you go really low and slow (which is delicious, but I want to eat tonight.) Add a little salt and pepper.

In a departure from the recipe, I brown the lemon slices in a little oil while this going on.  Medium low heat again, and don’t burn them, but give them just a bit of brown.  When the onions are done, lay the thyme sprigs across them. Put the lemon slices down, and lay the chicken pieces on top of them.

The recipe now says to add the lemon juice you’ve squeezed from whatever you didn’t slice and 1 1/2 cups of chicken stock. That’s a lot, and I don’t.  Instead, I put in about half a cup of stock and an unmeasured quarter to half a cup of white wine.

Bung it in the oven, covered, baste it after about fifteen minutes, and check it from ten to fifteen minutes after that; it will be done sooner than you think.

That comes out great, and I can’t say how satisfying it is to have such a simple prep turn out so well…

But what we did two nights ago was even better. I got a really good whole chicken from a local speciality butcher, spatchcocked it and flattened it as much as I could, floured it and browned it whole. Did all the steps up to assembling the dish for the oven as written above, but at the stock/wine stage added pastis again. Not too much — a couple of tablespoons at most.  It needed a bit more liquid when I came to baste it, so I added just a touch more stock and then, when I pulled it from the oven, I lifted the chicken out and stirred in a good tablespoon or so of chopped tarragon, mixing it into the onion mixture just long enough to infuse the sauce with that chicken-lemon-tarragon magic.

It was fabulous. If I’m using a whole bird the next time I cook this, I’ll drop the oven temperature a bit, probably to 350. Also, not that long ago, my sister in law gave us a tagine pot, and I’d like to try doing the oven portion of this in that, as we’ve found that the steaming that happens in the tagine leaves a creamier texture in the meat.  But trust me: this is dead easy, quick to prepare, and fabulous…and even more, an utterly satisfying way to push back the chaos outside the walls. Therapy in a saute pan.

That’s enough. I’m hungry. Heading off to deal with that.

Previous Post: « Primary Election Results
Next Post: All the Polls Are Closed. All the Calls Have Been Made. VP Biden Has Swept Today’s Elections »