We have another treat tonight in the form of a Guest Post by Albatrossity.

There may have been tears in my eyes as I read this haunting essay; it’s quite beautiful. 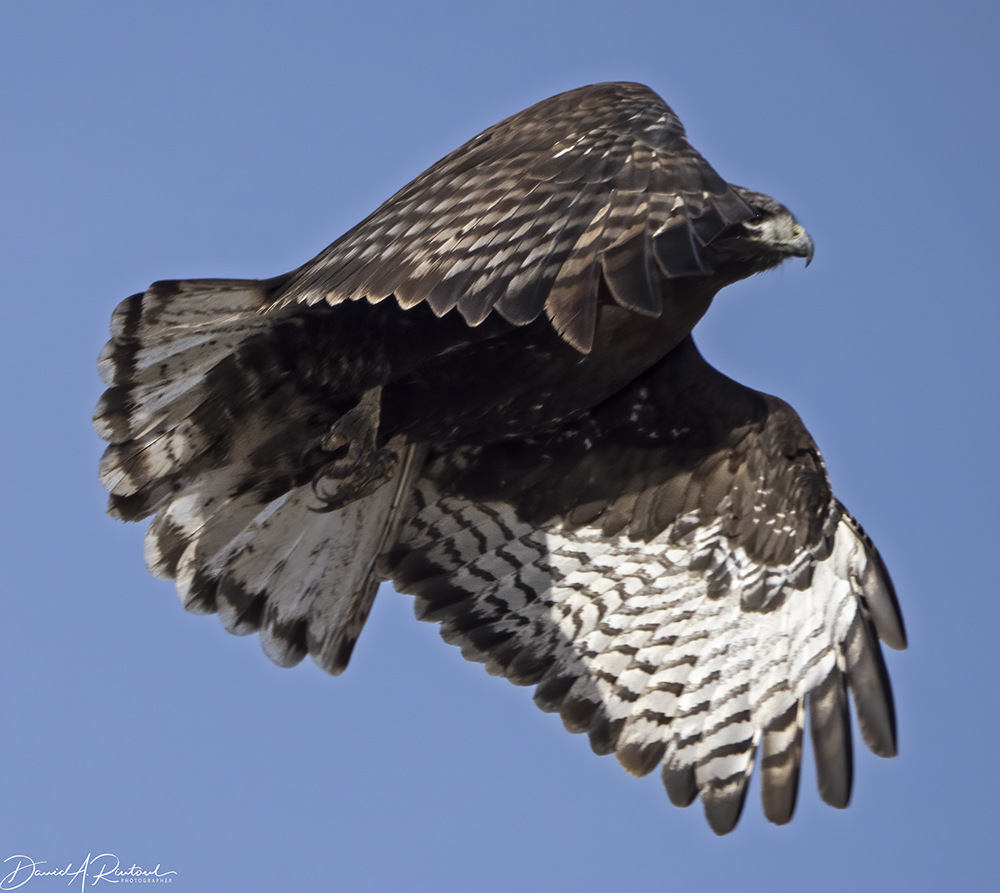 All winter long I’ve been haunted by dark hawks. Not in the spectral sense, but in the familiar. I’ve spent time looking for them, photographing them, thinking about them, wondering about them, and even hanging out with hawk researchers to trap them and learn more about them. I’ve dreamed about them, which is unusual, since I usually never remember my dreams! Maybe I’m haunting them rather than the other way around.

I live in a part of the North American continent that has an abundance of Red-tailed Hawks in the winter. Harlan’s Hawks, the darkest subclass (dubbed the “Black Warrior” by no less an authority than John James Audubon), come from the far northwest reaches of the range for this species, northern Alaska and the Yukon. That’s a one-way flight of nearly 3000 miles if you take the shortest flight path, and even longer if you dawdle along the eastern slope of the Rocky Mountains like these birds probably do.

We really don’t know much about how they get from Alaska to Kansas and back every year; that’s some of the research yet to be done by some of the folks I worked with this winter. But we do know that after they make that journey in the fall, many of them end up in exactly the same place where they spent last winter. For example, I have watched a small dark Harlan’s Hawk (probably a male) claim a winter territory about a mile from my house every winter for the past 7 winters. This year he showed up on October 7; as I write in late March he is still there, although his departure could be any day now. He is so familiar that my kids gave him a name, Harley, and he is a fine representative of the Black Warrior class (see photo).

All Red-tailed Hawks show variability in pigmentation patterns in every part of the body, but Harlan’s Hawks are even more variable. One of the hawk researchers who visited here this winter is studying the genetics of pigment patterns in Harlan’s Hawks. That’s a daunting assignment. The tail of each Harlan’s Hawk is unique. The distribution of colors in Harley’s tail – mostly white, mottled with black and just a hint of the eponymous red – changes little from year to year, and I would likely know him anywhere. But he returns here.

There are a dozen or so others that I have haunted this winter and last winter and the winter before, each finding the same territory every fall and relinquishing it to the local hawks only after the snows start to retreat across the northern plains. Interestingly our summer-resident Turkey Vultures, also a dark shadowy presence soaring above the plains, return here just about the time that the Harlan’s Hawks move out. These birds likely winter no farther away than Oklahoma, though no one knows for sure. (Somehow, working with vultures is even less popular than studying hawks.)

We always have dark birds in the sky here, even if they are different characters every season.

This winter the departure of our dark northern hawks coincides with another, even darker, arrival. Coronavirus. The stealthy migration of this wingless pathogen, hitching rides in passengers on airplanes and cruise ships, has changed the world in a very short time, with more changes yet to come. The non-human world will probably not detect this arrival in the short-term, other than perhaps noting a decrease in human traffic as they go about their daily business. But humans, and their insatiable needs, influence much of the natural world today; there will be consequences, foreseen and unforeseen, that other creatures will deal with in the coming months and years. There are always consequences, and change is the only constant.

Our consequences, at least for the short term but probably longer, include hunkering down and avoiding other people who could potentially transmit the virus to us, or us to them. Social distancing is the newest oxymoron (coincidentally, the recommended 6-ft distance is approximately the wingspan of a Turkey Vulture). Everything is on hold, and time seems to have warped so that it seems to move both very quickly and very slowly these days. News comes at us in waves with no troughs.

And even if we want to shut our eyes and plug our ears to the unpleasant new reality, it remains reality.

Our social media world, often discordant even at the best of times, seems both newly fractured and cohesive. I have virtual friends who live in Alberta, and we are linked by these hawks as much as by social media. They await the spring hawk migration eagerly, and I will get news from them when “my” hawks become “their” hawks as they pass through to the Yukon and become their own hawks, which really is what they have been all along.

Connectivity comes at multiple levels, and even though hawks might seem to be excellent at distancing themselves from humans, these birds have helped us make connections despite the distancing edicts we now live under. On a globe that has not only shrunk with air travel but also expanded with nationalism and hubris, the international journeys of “our” hawks bring us together, adding to our appreciation of distance and, paradoxically, connections. We prepare for a time of unknown duration where we must stay at home while these birds are starting on a 3000-mile migration back to their natal ground. They have been there before, and know the way. I envy them, since I seem to be both at home and adrift at the same time.

The arrival of this mutated virus, which may have made the leap from an illegally poached pangolin to a human being, is a stark reminder both of evolution and the destruction of the natural world at the hands of our species. We are ever so conscious of the movements of the virus in our world, but the underlying reality of our own invasion into the world of pangolins and their viruses is the background music we strain to hear. That music will only get louder. At the same time, this new coronavirus has no consciousness and no awareness of us. It only needs our movements to keep going, and our bodies as new hosts and new evolutionary laboratories. We are very obliging about those needs, even as we gain consciousness of their dangers.

Consciousness is a blessing, but also a plague. The lack of attention to human concerns by those in the non-human world is almost enviable right now; we yearn to return to that blissful nonconcern that the rest of nature has for us.  In a 1969 song entitled “Eskimo Blue Day,” Grace Slick and Paul Kantner summed it up brilliantly:

But consciousness also means that we can pay attention not only to this unique and devastating springtime, but also to the unconcerned natural world of birds, their travels and their lives. My delight in birds and glancing involvement in their daily rhythm has not changed in this plague year. Haunting hawks gives me hope, as well as another social network where the distancing tomorrow will be followed, inevitably, by reunion and reconnection next fall.

Godspeed, Harley. Stay safe in your summer haunts, and we’ll see you on the other side.