You are here: Home / Politics / Domestic Politics / What enthusiasm gap?

A new ABC/Post poll finds that Biden’s lead over Trump in a hypothetical match-up has shrunk to just two points: 49% to 47%. The poll also identifies an enormous enthusiasm gap between Republicans and Democrats, with more than half of Trump supporters reporting that they’re “very” enthusiastic about voting for Trump vs. just under a quarter of Biden supporters saying the same. 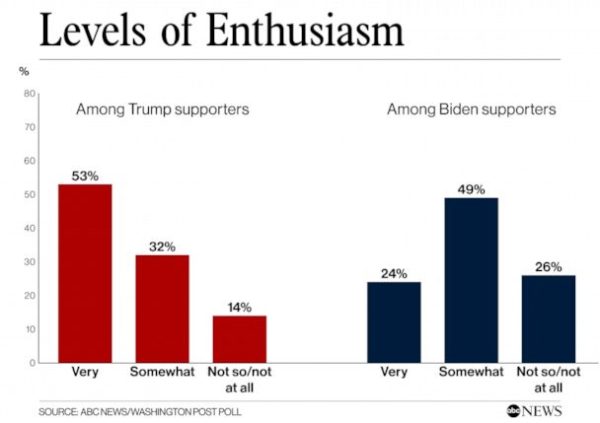 As noted, Trump is aided in this poll, produced for ABC by Langer Research Associates, by his ratings on the economy. Despite deep economic impacts of the coronavirus crisis, 57% of Americans approve of his handling of the economy, a new high in ABC/Post data. And Trump leads Biden in trust to handle the economy, 50-42%. (As reported Friday, 48% also approve of Trump’s handling of the job generally, another career high.)

I’m not that worried about this poll. I think Trump is currently benefiting from the most muted “rally ’round the flag” effect approval bump in recent history, and it won’t last long. As for the enthusiasm gap, if the pollsters had asked Democrats if they were enthusiastic about the opportunity to vote against Trump, I think the percentage would have been stratospheric.

The election will be a referendum on Trump, who is failing and flailing daily. Trump will limp into the contest having aggressively mismanaged a pandemic in a way that will directly affect everyone and with the economy he spent three years bragging about reduced to a smoking crater. I hate the circumstances, but I like Democrats’ chances under them.

As for Democrats who are “meh” on Biden, there are plenty of other ways to get involved and stay engaged. The fight on voting rights was always going to be critical, and the pandemic complicates it even more. Republicans who are defending senate seats this year have the Trump millstone draped around their necks, so those contests are suddenly more exciting. And of course all the House seats are up, and Trump’s hideous performance is an opportunity to not only hold but expand the majority there too.

We have hard months ahead of us, and things will change, as they always do. But here’s one thing that won’t change: Trump is radically incompetent. He will not rise to the circumstances because he is incapable of doing so. He has a hardcore cult following, but I don’t see how he expands it beyond the 40% or so of goobers already in his camp unless he becomes a different person, which will not happen.

Even our thoroughly shitty Beltway media can’t Febreeze away the stench of the orange fart cloud. So, without taking anything for granted and with a firm commitment to work like we’re 10 points down in every race, I think the enthusiasm to get rid of Trump will be the story of the 2020 election.