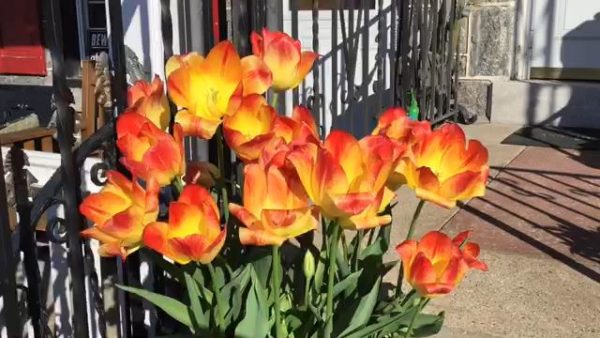 I grow tulips in a pot every year. This is this year’s tulip.

And, via commentor Aleta, some seed-starting inspiration: From the Downeaster, “The Maine Farmer Saving the World’s Rarest Heirloom Seeds”:

When Will Bonsall was growing up in Waterville in the 1950s and ’60s, his family lived modestly, and their grocery budgets were often tight. His folks weren’t much for gardening, and what fresh produce they brought home was rationed among him and his two brothers. His grandparents, however, lived on a small farm in nearby Belgrade, and whenever he and his family visited, the stockpiles of homegrown sweet corn and juicy beefsteak tomatoes seemed endless. There was no need to negotiate shares with his brothers. “To me,” Bonsall says, “that was the epitome of rich, gracious living.”

Today, Bonsall lives on a dirt road in Industry, in the western Maine foothills, in a farmhouse atop a terraced slope covered with apple trees and overlooking lush gardens. When I first visited him there, last May, the 70-year-old homesteader and author welcomed me warmly into his kitchen, sat me by his woodstove, and launched into a chitchatty, meandering discourse on potato scab, plant sex, and his dream of winning a MacArthur “genius grant.” Bonsall is a talker, and it was more than an hour before he offered to show me the space I had come to see, a second-floor room that he calls his office. “It’s a godawful mess,” he warned.

Bonsall led me upstairs, his white ponytail swinging behind him, and into a small room filled with boxes and bags overflowing with dried plant stalks and stems. “Some of the mess is mice,” he said, looking at the floor. Dusty sunlight fell through a window onto a wall of shelves, each one lined with rows of wooden cases the size of shoeboxes. Inside the cases were envelopes, many of them brown with age, and inside the envelopes were seeds — tens of thousands of them, the core of what was once among the country’s most prolific private seed collections.

On the top shelf, Bonsall said, were more than 1,100 varieties of peas. On the rows below were barley, beans, carrots, cucumbers, melons, squash, sunflowers, and more. At one time, Bonsall told me, he had what he believed to be the world’s most diverse collection of rutabaga seeds, along with the second-largest assemblage of Jerusalem artichoke varieties and world-class caches of radishes and leeks. He has donated specimens from his collection to researchers at the USDA-administered National Plant Germplasm System, sold them to seed companies like Fedco, and distributed them worldwide through print and online platforms, some of which he’s been instrumental in launching. His work, which he calls the Scatterseed Project, has been covered in multiple books and one Emmy-nominated PBS documentary, and it’s earned him something like icon status within the seed-saving subculture.

But these days his collection is dwindling. In part for lack of funding and staff, Bonsall hasn’t kept up with the cycle of replanting needed to regenerate new seeds. And he isn’t getting any younger. “I’m losing stuff right and left,” he said. “I’m in danger of losing everything. And time is of the essence.”…

It isn’t that Bonsall is unfocused so much that he’s nonlinear. When I ask a question about his work, it sometimes takes him a half-hour of digressions and detours before he circles around to answer it — but he always does, in rich detail. And he is candid about the shortcomings of his seed-saving operation, pointing out for example, that his seeds would last much longer if he didn’t keep them at room temperature. It’s just that the six or eight chest freezers he’d need to store his stash would put too much strain on his energy bill, he says.

Whereas other seed savers might concentrate on specific crops, on what grows best in their regions, or on species that exhibit certain characteristics, Bonsall seems to value rarity and diversity for their own sakes. Among his alphabetized envelopes are plenty of heirloom seeds that no one is particularly clambering to plant, but Bonsall compares his collection to a library — he doesn’t get rid of something just because no one has checked it out in a while. Here and there, he suspects he has some varieties that only a handful people worldwide still possess — a rare beet, for instance, once grown by gardeners in a region of Bosnia decimated by war and genocide in the ’90s.

Unlike the Doomsday Vault and other institutional collections, Bonsall’s Scatterseed Project aims to actually scatter his seeds. In the old days, he did this by publishing lists of his varieties in directories printed by groups like the Seed Savers Exchange. These days, he fills requests that come through various online platforms. He has long been a presence at ag fairs and grange-hall meetings, where other growers can pick his brain and sometimes rifle through his inventory. Since he launched the Scatterseed Project in 1981, Bonsall estimates he’s shared seeds with tens of thousands of people.

“It’s extraordinary,” says Albie Barden, a fellow seed saver in Norridgewock, who focuses on heirloom corn. Bonsall, he says, is a “living treasure.” Twenty years ago, Barden approached him for a few kernels of flint corn once widely cultivated by Native people in New England. Bonsall sent a packet of a variety called Byron, which he’d collected years before from an elderly Wilton resident with a few ears stored in a shoebox. Barden and others have since found the variety to be reliable, disease resistant, and delicious. Now, it’s beginning to catch on among small-scale farmers, Barden says, and has great potential to become a more widespread crop. If not for Bonsall, the lineage might have died out in a shoebox.

“He was the thread that kept that seed alive,” Barden says.

“Again and again,” Bonsall says, “I’ll discover something that originally came from me.”…