In the ACA market, there are four metal bands of increasing actuarial value(AV); bronze plans pay about 60% of claims through premiums, silver pays about 70%, gold pays about 80% and the rare platinum plans pay about 90%. There are also three common variants of silver for cost sharing reduction (CSR) subsidies where people earning between 100-250% Federal Poverty Level (FPL) and who buy a silver plan see the insurer pay 73%, 87% or 94% of claims through premium dollars.

CSR-87 and CSR-94 plans squeeze the Platinum 90% AV. They are similar, as platinum plans are allowed to be between 86% to 92% AV while a CSR 87 is actually anywhere from 86% to 88% and a CSR 94 is between 93% and 95% AV. Structurally all of these plans are similar. This similarity has led the Center for Medicare and Medicaid Services (CMS) to allow insurers to use the Platinum experience tables to design these three plan variants. Insurers have to submit their benefit designs to CMS and have the acaturial value land within the target zone outlined above. CMS provides insurers an expected utilization table that is partially built from individual market experience and partially built from other private, commercial contracts.

The platinum table is built mostly on the claims experience of individuals with higher incomes. The picture below is the premium and benefit structure of a single 40 year old living in Philadelphia and earning $18,000: 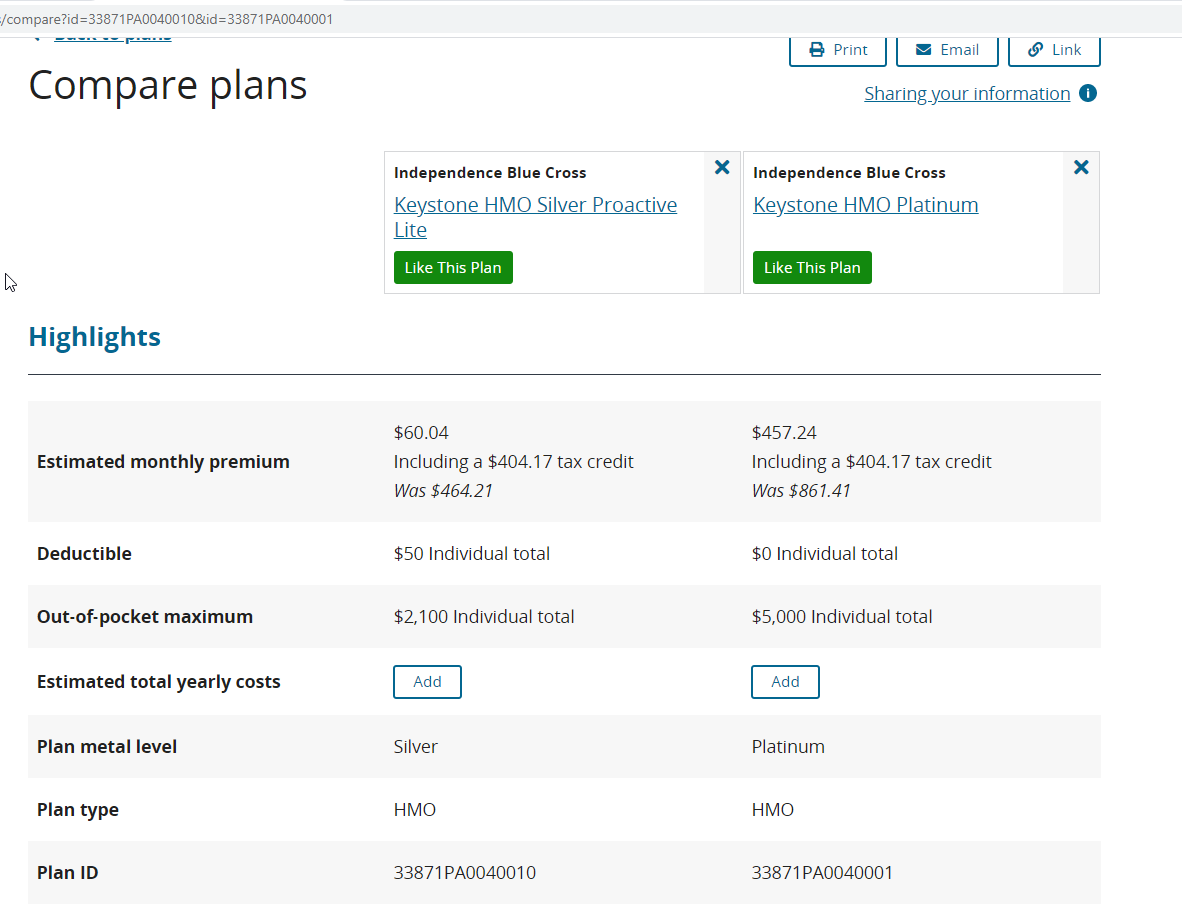 Someone earning $18,000 per year will not buy a platinum plan when a CSR-94 plan is both cheaper and higher actuarial value.  This Philadelphia platinum plan would have a premium, net of subsidy, of 30% of annual, pre-tax income while the superior plan has a premium of 4% of income.   The platinum plan is grossly dominated by the CSR-94 plan for someone making $18,000 while in some circumstances it is a better plan for someone making more than $50,000 and therefore subsidy ineligible.

The point of cost sharing is to either merely to shift costs onto the sick or to create enough pain to deter low value care or make people try cheaper options first.    A $500 out of pocket charge for someone making $18,000 per year is 2.7% of annual income while that same charge for someone making $50,000 per year is 1% of income.  A basic precept of economic analysis is that the marginal utility of a dollar decreases as income goes up.  A $500 expense is way easier for someone earning $50,000/year to bear than it is for someone earning $18,000.

$500 worth of cost sharing could conceivably have very different behavioral effects for someone who is CSR-87 or CSR-94 qualified compared to someone who is buying a non-dominated platinum plan.

CMS currently uses the same experience tables to design plans for two very different populations.  I suspect that the actual deterrant value of increased cost sharing for access to care is significantly higher for the CSR eligible silver buying population than it is for the platinum population. If my inkling is right, then the cost sharing for CSR variants for people earning under 200% FPL may be too high. The solution would be for CMS to generate a CSR variant utilization table using only ACA individual market data for either the 2022 or 2023 plan years.

* For my own sake, I needed to write something that was not COVID related at least once this week.