I was never really a cat person until I first started dating my partner Stephanie. I was immediately adopted by Linden, one of her two furbabies.  Linden was a Miyazaki dust-goblin of a cat, all poofy black fur and huge yellow eyes. When I began seeing Stephanie regularly, I would be chewed out by Linden when I would arrive for the weekends. In a flurry of meeps and squeaks, she’d vituperate me, wondering if I were possibly seeing other cats. 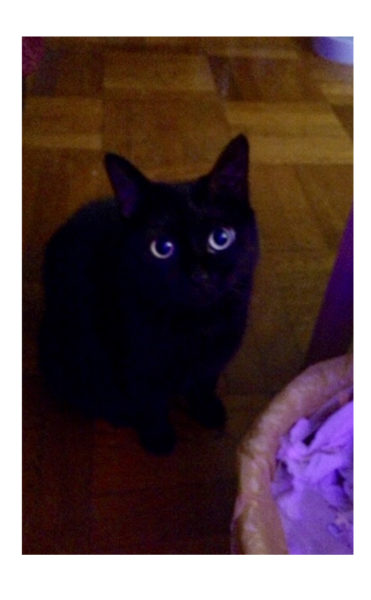 Stephanie’s cat-naming-protocols were based on where the cat was rescued. There was a Cortelyou, (from Cortelyou Road) Linden, (from Linden Blvd) and Hamilton (from Fort Hamilton Parkway). Linden was a special cat, a fuzzy princess purrasaurus who was amazingly affectionate. She loved her mom, but followed me around the apartment unerringly. She would leap in my lap to hide from the vet or burrow into a pair of my discarded pants, left on a comfy chair. She would let me hold her like a baby while she kneaded my arm. She would headbutt me when she wanted scrumbles, meep at me when she wanted treats, and steal food off of my plate if we were eating something she liked, like shrimp.

Goddamn, I loved that cat. She died one night in the middle of January, in a bolt out of the blue. One minute she was fine, the next she gurgled and seized. She stopped breathing a moment after that. There was no time to get her medical attention. I had to accept it. My little girl was dead. My girlfriend and I were devastated. Just destroyed. Unfortunately, we noticed very shortly afterwards, that her brother Hamilton was also keenly lamenting Linden’s absence.  Even wrapped in our own grief, we could see him incessantly hunting for her. He would check her favorite hiding spots. He was constantly looking over his shoulder for her during dinnertimes. It was really sad. 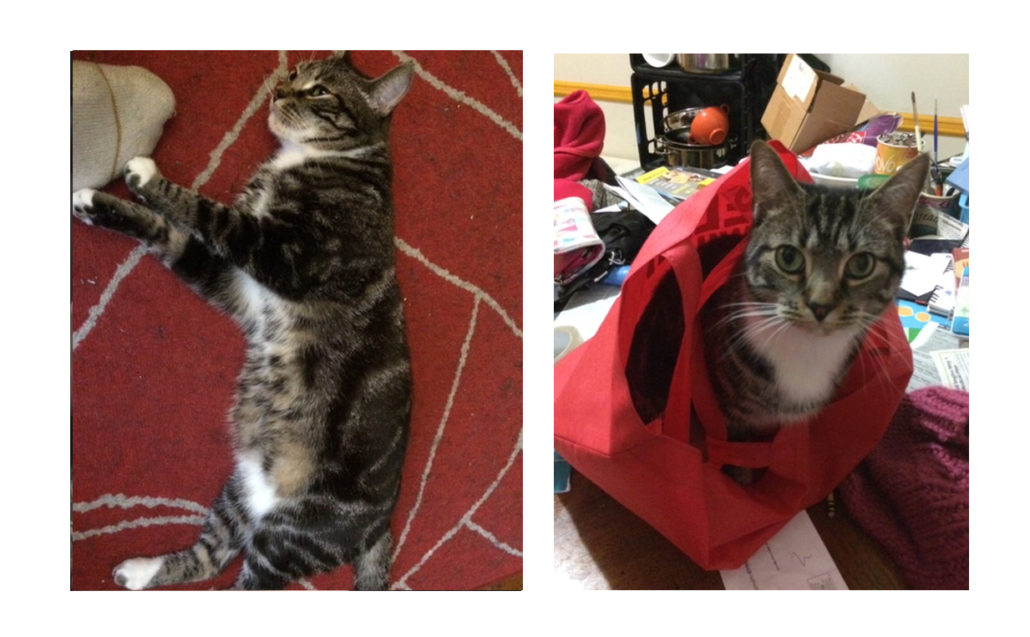 Steph and I talked about the problem.  I consulted with some of the Jackals, (Thanks, WereBear!) and we decided to take a walk to Sean Casey Animal Rescue, where we had adopted Hamilton, right before NYC shut down for the plague. I was interested in adopting a younger cat, eight months to a year old, rather than a kitten. This concern was birthed out of my own anxieties about being a new kitten father and fears that Hamilton, a boisterous and knuckleheaded goofball, might inadvertently injure the lil fella while trying to play with him or her.

We met a couple of cats. There was a glorious, old lady-cat named Peaches and Cream, a few others that were even older, and some very tiny kittens mewling for my attention, when I stumbled across a cage with a beautiful reddish-brown, tiger-stripey named Ally.  One of the SCAR helpers told us they’d gotten her from a kill-shelter “down South”, and that she was about a year old. She was a tiny bundle of trust, all headbutts and belly-showing, and I instantaneously liked the cut of her jib. We decided she needed to be part of our weird menagerie, and took her home. Sean Casey Animal Rescue is between Fort Hamilton Parkway and Caton Ave, so Ally became Caton, Caton became Catie-cat, and that was that. 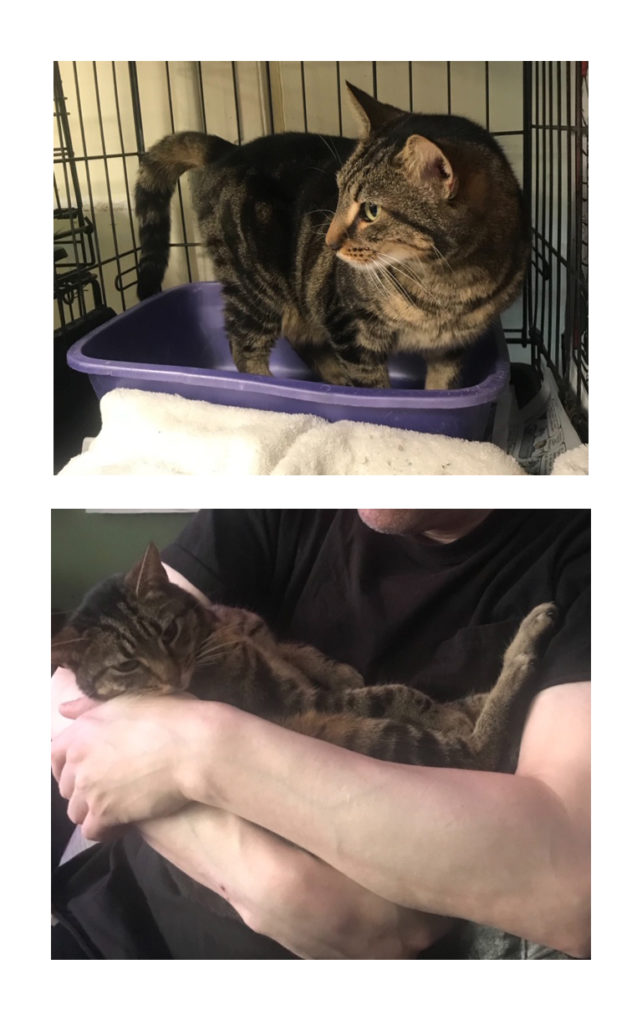 We quarantined her in the bathroom, but once she realized she wasn’t at the shelter anymore, she didn’t mind a bit. She chomped down her wet food with growly glee and delighted at the panoply of toys we provided for her. Hell, she didn’t have that or those at the shelter. It was also much quieter. SCAR rescues all sorts of animals from all sorts of predicaments in NYC, and pre-plague, it would be no surprise to go in there and find tortoises and iguanas walking freely, dogs baying in the yard, dozens of cats and kittens vying for attention and hordes of caged birds chirping like they were getting paid by the hour. Consequently, Hamilton and his new, younger sister don’t meow in the conventional sense but sound far more like birds. They trill, and they both vocalize a lot. 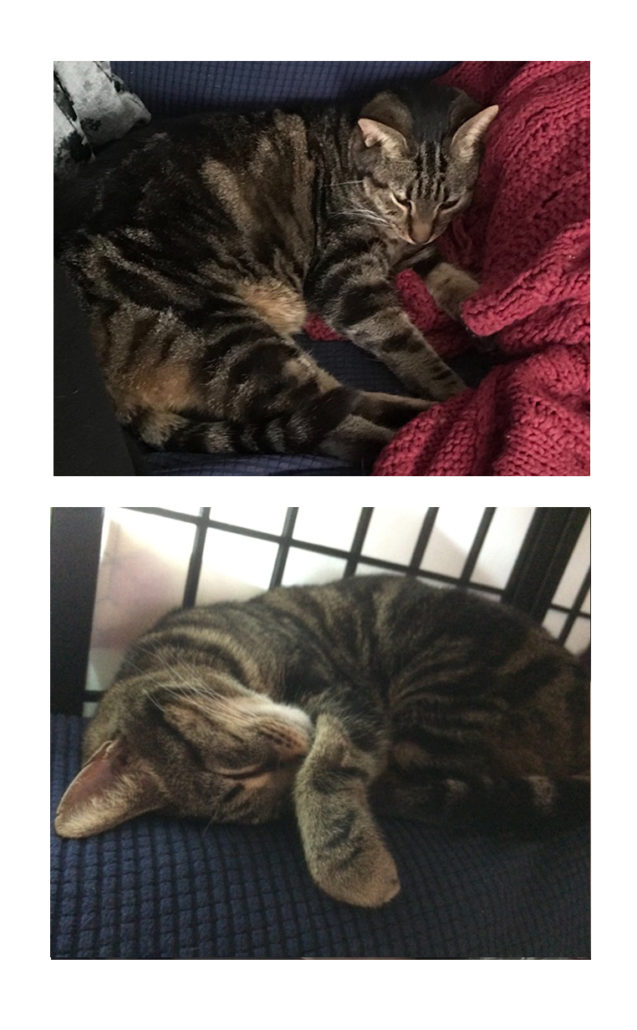 As soon as she went on her voyage of discovery through our apartment, she found rugs, blankets and sofas very much to be to her liking. She was very keen on staking a claim to our home. For a cat who grew up in shelters, she knew exactly what to do with the scratchy-posts on the cat-tree. Woe onto any of the catnip-mice that would dare cross her path, for that poor mouse will have seen its last sunrise. She plays hard, reveling in the sense of freedom only someone that’s lived a chunk of her life in a cage could embrace. She’s also made herself at home, with relative ease. She swiftly discovered the quiet darkness of my clothes closet and the comfy chair with the pants that cats seem to like. 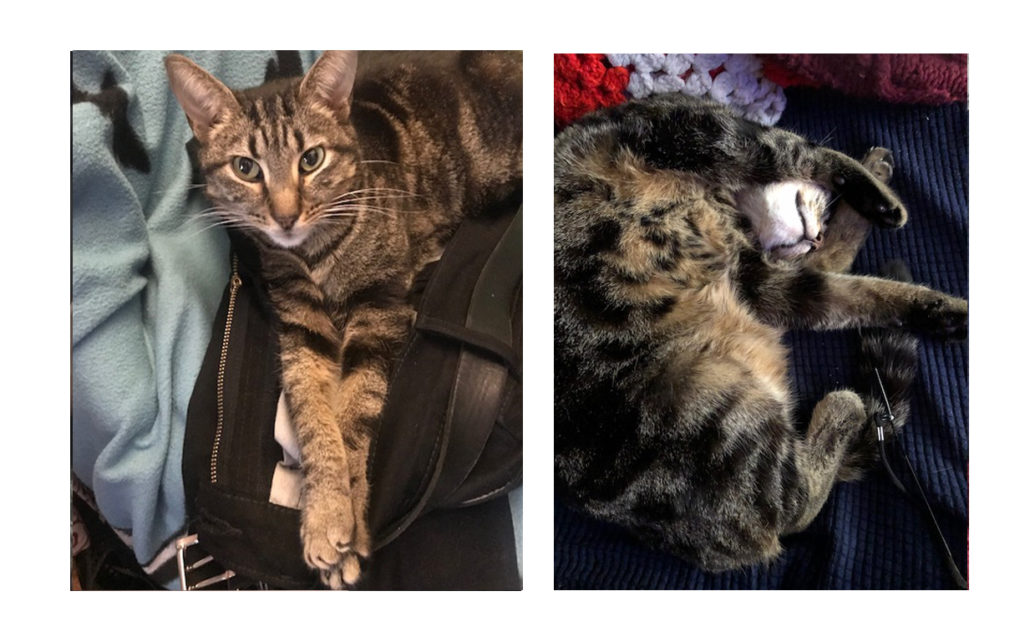 Hamilton wasn’t too happy with this turn of events at first. He thought all of our stuffs were belongings to him, but this upstart tiger-stripey was putting that notion to the question. There was a lot of hissing at first and some territorial gaming. It especially became a problem during mealtimes. Catie might very well have been the runt of her litter, and making sure she got fed was a high priority for her. She was a very aggressive eater, snatching food from Hamilton’s bowl and making a huge mess for such a small cat. We’re also not sure where she picked up the habit, but she liked to toss her bowl over when she was finished eating. We solved one issue by moving Hamilton’s tray and bowl, while the other was solved with some Velcro strips. She’s still a sloppy eater though. Slowly, happily, a form of cat-détente developed. 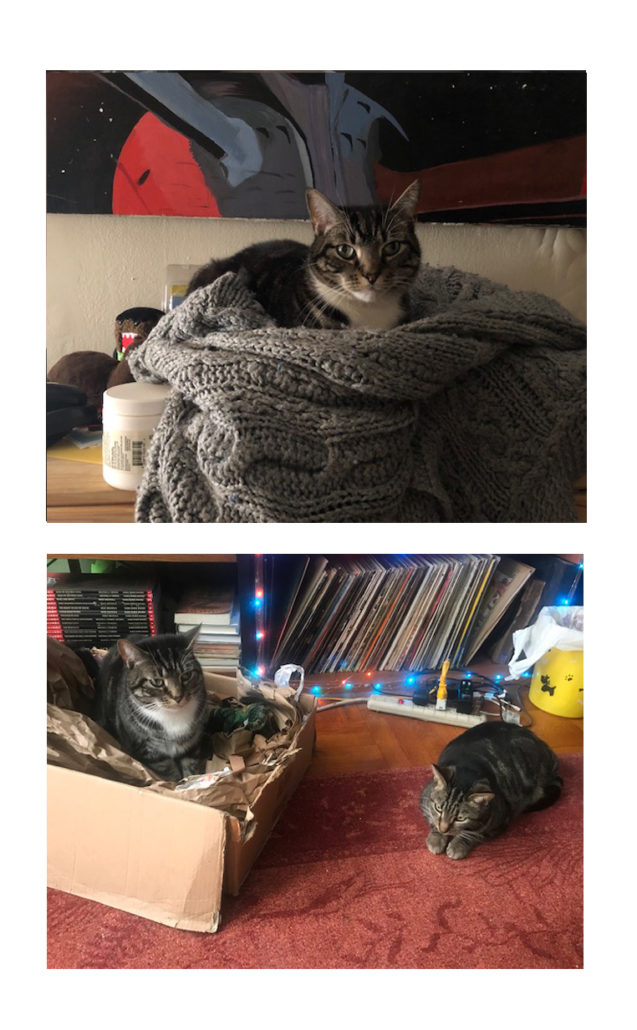 The thing is, both Hamilton and Catie are very friendly cats. Hamilton, as previously noted, is just a boisterous, bouncing, goofball. He’s also a serious mama’s boy, and shadows Stephanie constantly. Catie has decided that her new life works much better for her than the old one. She recognizes, I think, the role I played in finding her that new life and can often be found a foot or so from me. Stephanie and I live in Brooklyn, and thanks to the quarantine and the plague, we’ve been stuck at home for the duration. Consequently, Hamilton and Catie have been spending a lot of time in close proximity. It looks like they’ve decided that the other fella ain’t quite so bad. 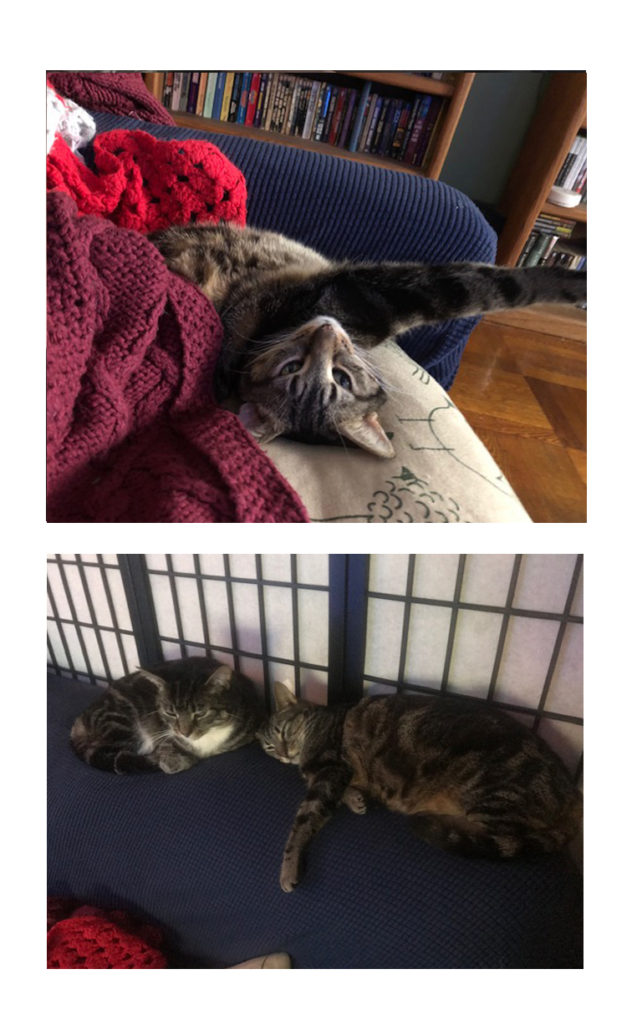 Things are really working out. Maybe it’s the remembered, shared smell of SCAR, maybe it was some secret tiger-stripey thing, maybe dumb luck, but whatever it is, I’m so glad. They play together now. They share toys. They’ll sit together on the windowsill and trill and taunt birds in the courtyard. They stalk and groom each other, and often can be found sleeping on blankies, wrapped around each other , dreaming of catnip and treats. 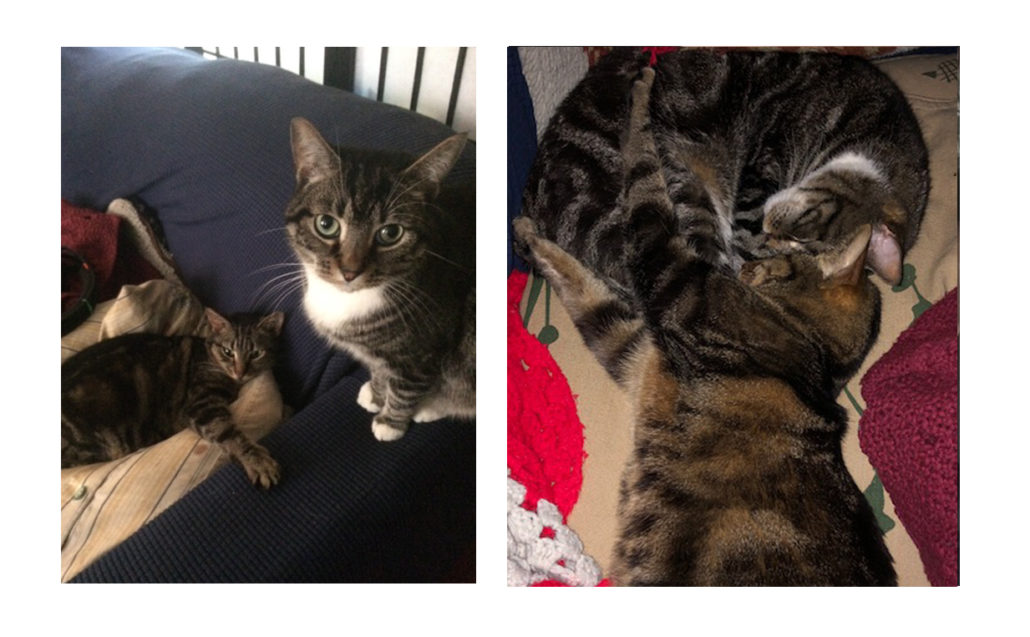 So that’s it. That’s Catie’s story so far. She’s gained a bunch of weight and gotten a lot bigger since we adopted her, and we’ve been treating a nagging ear issue she’s got. Otherwise she’s happy, healthy, and so down with her new home. She’s taking our lives over like a boss. Here’s a bonus image of her diving head-first to drink out of my glass of water, just because she could. That’s just how Catie rolls.

If you think you might like to have your furry family featured here, please send an email to watergirl at balloon-juice.com.  If you check out the banner picture for Furry Friends, you’ll see that we’re not limiting this series to cat and dogs!  ~WaterGirl