You are here: Home / Food & Recipes / Cooking / Roast Chicken–A Poultice for the Soul

Sweet FSM on a pogo stick!

I am losing it today, as each new news drop triggers a fresh cycle of rage.  Fuck every national Republican (and most of the rest)–sideways with a rusty farm implement.

I’m genuinely in fear for the Republic at this point, what with a criminally-led DoJ and an increasingly corrupted judiciary enabling whatever arbitrary power grab the Cheetolini stumbles upon.

Clearly, I need a break, and maybe some of y’all do too.

Some here may recall I am a roast chicken obsessive.  Sunday afternoon, I picked up a really nice bird from our local refinance-your-mortgage specialty butcher (Savenors, for the Massholes among us).

Brought it home, and then thought about what to do with it. I’ve posted before on our defaults–splayed chicken with leeks and mushrooms, roast chicken with duck fat under the skin and so on.

Nothing seemed quite right so we started to vamp. 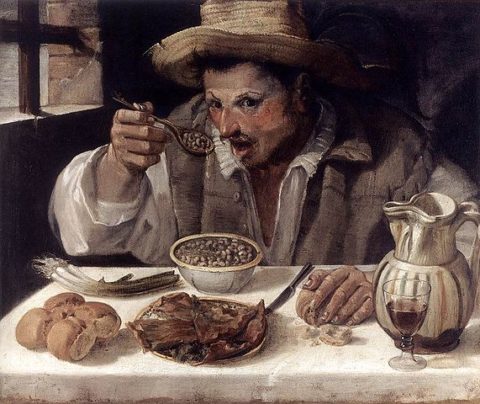 First, I spatchcocked the bird.

Then I made a wet rub to put under the skin, very, very loosely adapted from a Yotam Ottolenghi recipe for chicken sofrito.  It was somewhere around a 1/4 cup of olive oil, the juice of about 1/3 to 1/2 of a lemon, one huge (or two more regular) garlic cloves very finely chopped, some thyme, and about a teaspoon of pimenton–smoked paprika. A little bit of maple syrup to cut the acid (honey would work too).  Salt and pepper. I stirred it up, tasted it, adjusted it (more salt, and a little more pimenton– I wanted to make sure the smokiness of the paprika comes through–not too much, but there.  I loosened the skin on the breasts and thights, and spooned most of the sauce under the skin, saving just a little to rub on the outside.

I had been preheating the oven to 400 degrees with a large cast iron frying pan heating up inside it.  (A big boi: the Lodge 15 inch beast. Work on your upper body strength before using.) When the oven got to temperature I slopped some more olive oil in the pan and then added the chicken, breast side up.

While that got started, I prepped a red onion, four or five shallots, cut into quarters, and an orange pepper. Mixed them all up in a bowl, added a little salt and pepper, a quarter cup or so of sweet sherry, another third of a lemon’s juice, and some capers.

At about the twelve minute mark, maybe fifteen, I added the vegetables to the pan, scattering them all around the bird, and then shut ’em all up together.  After another twenty minutes or so–maybe 25, who knows?–this was the result: 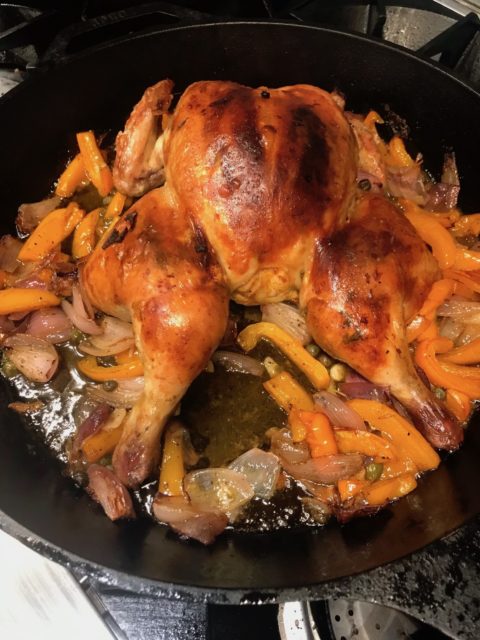 The texture of the bird was as good as I remember achieving, well, just about ever. The self basting with the spice rub (and the acid involved, I suspect) did something wonderful. The vegetables, braising in booze and chicken fat, turned into a kind of jam. And the garlic-pimenton-lemon flavor was just forward enough to make it all interesting, without overwhelming the quality of the chicken meat itself.

Trump and disease and death simply faded out of mind for a good hour.

Your turn: what have you made or dreamt of that has, at least for a moment, lifted you out of grim reality?

Previous Post: « I Don’t Care What the Polls Say
Next Post: Medium Cool with BGinCHI – Let’s Talk About Video Games