You are here: Home / Past Elections / 2020 Elections / Floriduh! Women On the Loose: They Don’t Call a Group of Karens a Privilege For Nothing!

Oh my. Here’s the rest of the testimony of the first woman. She appears to be alluding to Pizzagate, among other far-right conspiracy theories. pic.twitter.com/J10IB3AXTY

That’s a lot of concentrated crazy even for south Floriduh!!!!!

But what is Floriduh! Man up to while Floriduh! Women are doing their performative insanity? He’s getting indicted!

JUST IN: Seminole County Tax Collector Joel Greenberg has been indicted by federal prosecutors for stalking and the unlawful use of a means of identification of another person, the Department of Justice announced. https://t.co/sW3IqfkrXm

SEMINOLE COUNTY, Fla. – Seminole County Tax Collector Joel Greenberg has been indicted by federal prosecutors for stalking, and for the unlawful use of a means of identification of another person, the U.S. Department of Justice says.

United States Attorney Maria Chapa Lopez announced the charges on Tuesday. The indictment stated that Greenberg attempted to cause substantial emotional distress to a political opponent who worked at a Florida school. He had letters sent to the school where the employee worked. These claimed to be from an anonymous student of the school. The letter claimed that the school employee had engaged in sexual misconduct with a student.

However, the indictment stated that Greenberg knew this was false.

In addition, Greenberg set up a Facebook account that claimed to belong to a concerned teacher at the school, the indictment said. He made postings with that account falsely claiming that a school employee had engaged in sexual misconduct with a student.

The indictment also said that Greenberg had an imposter Twitter account made of his opponent, where he claimed that he was a segregationist and in favor of white supremacy.

Was this at all predictable? Why yes, yes it was! But how you ask? Allow me to introduce People’s exhibits A and B! 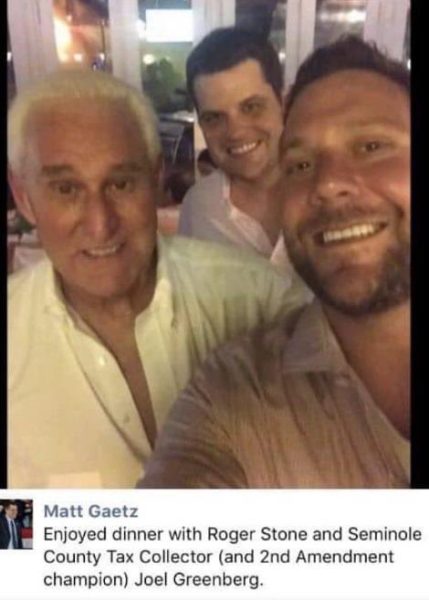 Yes, let’s give the creepy stalker guy guns, what could possibly go wrong? 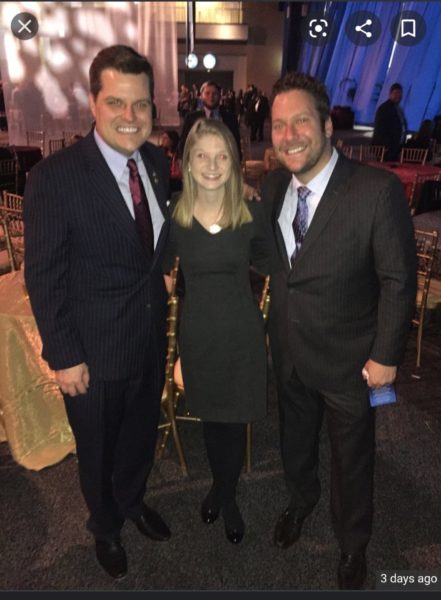 I’m pretty sure that has to be Congressman Gaetz’s adopted daughter, Nestorina, who no one knew about…

With friends like Gaetz and Stone, Greenberg is going to fit right in in prison!