You are here: Home / Foreign Affairs / The Information About the Russian Bounties On US And Coalition Service Members Evolves

The President and his administration are, of course, pushing back. The current Director of National Intelligence, John Ratcliffe, tweeted out a denial, based on a quick internal review of records, that the President and the Vice President had been briefed. What he did not deny or pushback on was the actual substance of the reporting. Specifically, that Russian military intelligence, the GRU, has been offering bounties for US and coalition forces in Afghanistan to the Taliban and Taliban aligned militias. The Press Secretary also issued a similar denial to DNI Ratcliffe’s. Former Acting DNI Grennell tweeted out a complete denial as a response to Congressman Lieu’s tweeting about this that covered the briefings and the intelligence assessment that the GRU had taken out bounties on US and coalition forces. Grennell was then dragged by Chief Warrant Officer (ret) Jim Wright for not knowing what he’s talking about, which is a fact as Grennell has no intelligence experience, but a lot of experience spilling sensitive and classified information when serving as the US ambassador to Germany. The President also got in on the denials, tweeting out his own denial that he’d been briefed, as well as the Vice President and his new Chief of Staff Mark Meadows, but not denying the reporting about the intelligence assessment. He then went on to assert no one has ever been tougher on Russia and attack The New York Times, VP Biden, and his son Hunter. It also doesn’t help that the President’s tweet came out after the Russian embassy’s that appears to mimic key phrases from the Russian’s twitter denial. 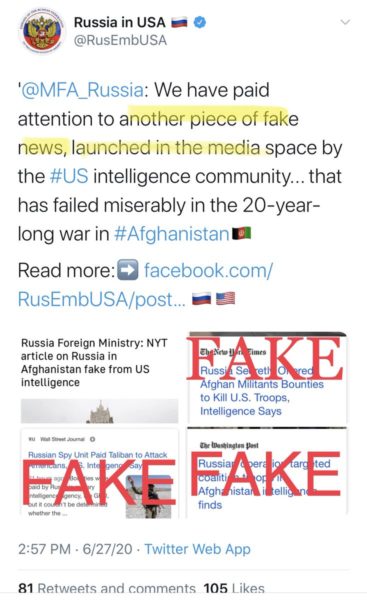 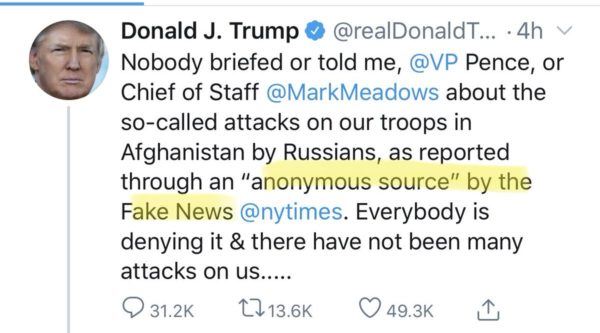 Here’s what I think is really going on. I have no doubt the intel is solid and the leak is accurate. It has been confirmed by too many different sources, including our allies, and reported in too many different competing news outlets. Including Fox and Sky, which given their ownership and editorial stance, are sympathetic to the President. The new DNI, John Ratcliffe who also has ABSOLUTELY NO EXPERIENCE WITH INTELLIGENCE, did not deny the underlying truth in the leak in his response – that the GRU had been offering and paying bounties to the Taliban and Taliban affiliated militia to kill US and coalition forces in Afghanistan. He just denied that the President had been briefed, which was also the official White House position and that includes the denial the President tweeted out. While former Acting DNI Grennell has now weighed in claiming that all of it is a lie in a tweet responding to Congressman Ted Lieu, frankly Grennell might not have been in the loop. All we know is that this was assessed and then briefed sometime up to the beginning of March. It may have been briefed before Grennell took over, though he was installed in February. The reason for that is that as soon as this got to the theater commander and the US ambassador in Afghanistan from the Special Operations Forces and military intelligence personnel in theater, it would have been sent back as a priority for the National Command Authority’s situational awareness. The President’s denial that his new Chief of Staff, Mark Meadows was not briefed means nothing, because Meadows didn’t become the White House Chief of Staff until March 31st and then didn’t really start on site until mid April because he had to self quarantine for two weeks. So he wouldn’t have even been around based on the timeline being reported.

What we’re seeing in these denials are semantic games around the words brief and briefing. The NY Times reporting indicates this intelligence was included in the President’s Daily Brief (PDB). We know, from previous reporting, that the President does not and will not read his PDB. And we know from previous reporting that his primary briefers tend to not tell him anything negative about Russia, or anything else that would upset him, because he immediately loses his temper and blows up the briefing. My take is that it was in the PDB, which covered the intelligence community’ butts, but that because the President doesn’t read that and because no one will risk a temper tantrum by briefing him on anything Russia does that is negative, that it was never formally briefed. As in told to him in a session on a calendar with a block of time marked briefing. I would expect, however, that someone did mention it to him some other way. As an aside, in a different setting, what have you. Which is why they are being so precise in denying he was briefed. Notice they’re not denying he was told or notified, just not briefed. It is important to remember that the President had at least a 1/2 dozen phone calls with Putin between March and June. And those are the formal ones we know about because they were official. It does not count him talking to Putin on his private cell phone from the residence at night or early in the morning before he bothers to actually go into the Oval Office.

Mark Zaid, who was of counsel for the whistleblower has publicly offered to represent any and all US intel or nat-sec personnel who have knowledge of this, can confirm it, and wish to formally blow the whistle. Specifically that he and his firm will take the case pro bono and ensure that all the proper forms, formats, and processes are taking to ensure that the whistleblower complies with the law and is protected. We’ll have to wait to see where that goes.

The Washington Post is now reporting that US and coalition forces were, in fact, killed in action in Afghanistan as a result of the bounties offered by the GRU. Given that no one in or around the President, with the exception of Grennell, has even attempted to deny the actual underlying facts of the reporting, this story is only going to get worse. If the principals knew about this because they all get the PDB  – any and/or all of the Director (or acting) of National Intelligence, the Director of Central Intelligence, the Secretary of Defense, the Secretary of State, the National Security Advisor, the Senior Directors for Afghanistan and for Russia on the National Security Staff who work for the National Security Advisor – and they should have and they never actually said anything to the President, then all of them are derelict in their duties and need to be removed from their positions. If it was in the Presidential Daily Brief and neither the President, nor the Vice President read it because they can’t be bothered to read them, then they are derelict in their duties and need to be removed from their positions. What we know now is not the end of this story. I expect more information will come out, it will continue to be damning, and the President and his surrogates will try to ignore the underlying reality while lashing out at those who are reporting it. All while we have US and allied coalition forces in contact with the enemy in Afghanistan. An enemy that is being monetarily incentivized to kill them by the GRU/Russian military intelligence. If this failure to do anything to make Russia stop what they’re doing, from the most basic issuance of a démarche telling Putin to stop, let alone anything resembling real pushback, is not a clear example of a high crime and misdemeanor, then nothing is

Previous Post: « Lest We Forget Open Thread: Pence Is Every Bit As Dangerous As Trump
Next Post: COVID-19 Coronavirus Update: Sunday/Monday, June 28-29 »